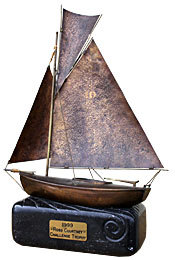 The Ross Courtney Memorial Trophy is presented each year to the winner of a sail-off between the boats scoring the three highest points totals shown on the score sheets in the below links.  Individual races score 3 points for a win on scratch, 2 for second and 1 for third. Series are scored from 6 for a win to 1 for sixth. Points are earned for all scratch series, regattas and special races sailed by the class.

About the Ross Courtney Memorial Trophy:

Ross Courtney started racing Howth 17 Footers in 1939 on Echo with John Pearson, while she was owned by his father, Drewry Pearson.  After the war, Ross campaigned Mimosa from 1947 to 1958, taking over the boat from his father Clen Courtney, who had also owned Silver Moon at various times from 1907.

One of the great rivalries for dominance of the 17 Footer class was between Ross Courtney and Norman Wilkinson, the latter having raced Leila for 52 years with great success.

When Ross Courtney died in 1997, the family commissioned sculptor Vincent Browne to create his vision of a Seventeen Footer in bronze.

Vincent will be known by many as the creator of Mr Screen, the bronze usher who stands outside the College Green Cinema, and of the bronze palm tree seat in Temple Bar. Vincent's stylised 17 Footer carries the number 10 in memory of Mimosa, and ghosts across its polished limestone plinth leaving a just a ripple of bow wave.

Because of its weight and fragility, the trophy is now kept in HYC and can be seen in the private ‘Galley’ dining room.