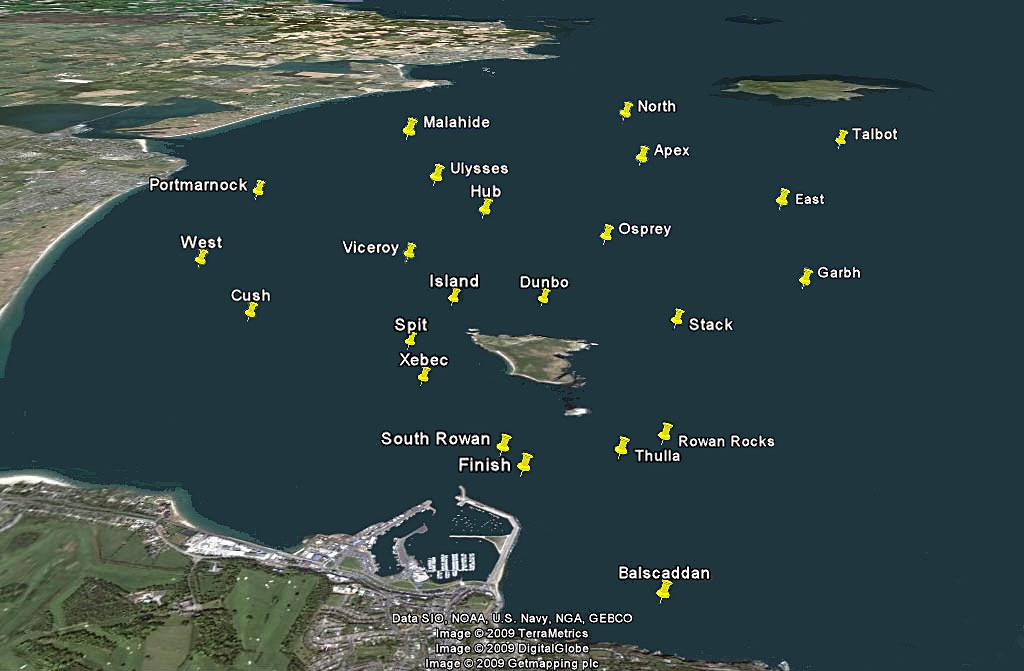 Our local sailing and racing area is bounded by Howth Sound and Lambay to the north , Portmarnock and Malahide to the west and the Irish Sea to the east and often confounds the unwary with contrary tides, eddies, gyres and slack areas. You can be baffled by a similar boat headed in the wrong direction and gaining or sailing nearby and going a knot faster.

Many visitors assume that they cannot compete with our local knowledge. The truth is that most of us 'locals' might as well be predicting the stream directions with tea leaves or relying on Divine intervention, which sometimes appears to be the case. To help dispel some of the black art we spoke with some people considered 'tide gurus', both fishermen and sailboat racers.

The tides in the area are complex but a basic understanding can help your performance improve. A Scandinavian Optimist team in the 90's spent weeks with flow meters and floats all around the area. They gave up in despair without collecting any useable data! That was probably a good lesson, what is really required is a conceptual knowledge of the main elements allied to alert observations on the day. The conditions change frequently and the tidal streams respond.

Much of this article is about the tide peculiarities in the proximity of Baldoyle, Ireland's Eye and Balscaddan, which play a big part in our HYC Club Racing series.  However, Championship Events are held in the area to the East of Malahide, where the tidal flow is more standard and predictable.

Hopefully this article will prompt you to focus on this important racing varible that will have a bigger impact than a new headsail or any other go-faster tweak - if you get it right. Get it wrong and even the best prepared boat and equipment will leave you trailing.

North of Rockabill (a few miles north of Lambay Island), there is a tidal null point midway up the Irish Sea. This probably influences the tidal streams in our area as the slack area moves a little north or south depending on the conditions. Similarly, a persistent southerly wind will prolong the flood and a persistent northerly will prolong the ebb.

The influences that alter the main Irish Sea north/south stream are : 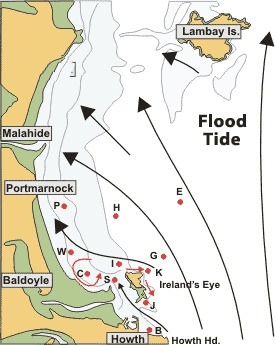 The islands and headlands ie, Howth Head, Ireland's Eye and Lambay. The bays/inlets of Malahide and Baldoyle. The tide height and atmospheric pressure. The wind direction in the preceding days. The relative times the tide turns.

All this results in four main back eddies that can give you a significant advantage. These eddies are in the vicinity of:

The first thing to note is that the streams turn in Howth Sound and at Balscaddan between 1 and 2 hrs before the main streams. They also turn early at the West (W) & Cush (C) marks and along Portmarnock Strand. 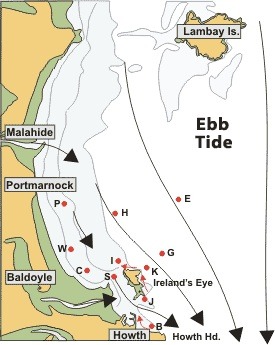 This is because the inlets at Malahide and Baldoyle are large areas to fill on the flood and drain on the ebb. Baldoyle fills up more quickly than Malahide and slackens earlier due to the lower volume of water. This can be observed at the bar and its subsequent effects at the Cush (C) and West (W) marks.

These inlets deflect the main north/south stream east of Lambay and the stream in Howth Sound gradually NW/SE, increasing W/E as you close the shore.

Along the Portmarnock shore the streams run slacker and benefits can be gained by standing inshore if there is an adverse stream on the direct course to your mark.

At the West (W) Mark you will experience a SW flood and a NE ebb, gradually turning E/W as you approach the Spit (S) Mark as Baldoyle fills and drains.

Another view, based upon observation, is that the stream between Cush (C) and Spit (S) is either slack or flowing towards the beach on Ireland's Eye regardless of ebb or flood.

The islands and headlands are in the way as the inlets fill and drain and divert the streams on each side creating back eddies. This is evident along both edges of the Sound, along Portmarnock Strand and along the north of Ireland's Eye.

Also north of Ireland's Eye, in the vicinity of the Island (I) mark, there is a tidal eddy. Its location, which is generally obvious, moves depending on conditions and the tidal direction. Similarly, the south side of Lambay Island has a more west/east direction with a slack area south of the bar running west from the Burren Perch.

In the Sound the stream runs strongly in the centre and slacker on the north and south edges. 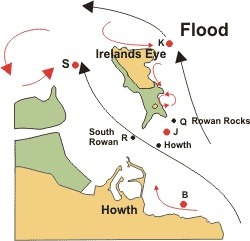 In fact on the south side you will often experience a back eddy a cable or two off and gain up to 1.5 knots from Balscadden (B) and along the pier to the lighthouse. Generally there is a cross tide, roughly N/S, at Balscadden (B) which can ruin your layline and in light conditions can end your race there. On the other side of the Sound, just north of Thulla (J) is an area of slack water between contrary streams.

All these features will give you an advantage if balanced against the racing wind strength and direction on the day and how far out of your way you have to go. The streams can run at up to 2 knots and you should also take account of the wave height and patterns generated by wind and tide in deciding you course to the next mark. Your course will also be influenced by the velocity gradient as you move west out of the main stream e.g., the rates may be 2kn at the East (E) mark, 1 Knot at the Hub (H) and ¼ Knot along the Portmarnock shore. Advantage or disadvantage ? - your call! 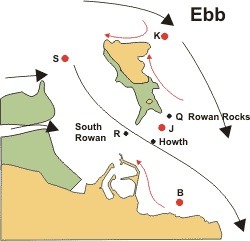 The most sensible approach is to be aware of the variables and endevour to understand the principles whilst relying on regular observations before and during the race. Continued observation is key because the streams turn at different times throughout the area you will often find the stream directions on your second round or between the same marks totally different 30 minutes later.

When you assimilate all this data you must then judge if the potential tidal benefits outweigh your VMG when compared to the sailing wind - not easy, but that's why we do it. Anyway, hopefully you found something useful that will add another dimension to your racing, alternatively if you have experienced other tidal features in the area or have an opinion please raise a topic on the members area of the site.