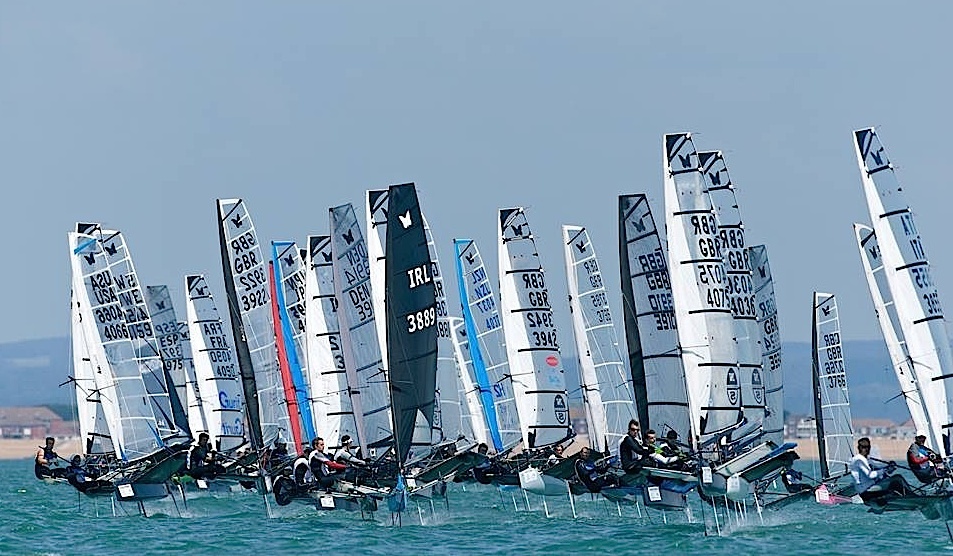 Transport to the event was generously provided by Mercedes Ireland who sponsor Annalise’s radial campaign and provided her with a brand new Mercedes Sprinter van which conveniently had a load area about 6 inches longer than a moth, Cathy MacAleavy also kindly donated ten years’ worth of Tesco vouchers towards out ferry costs. The fleet arrived on the 12th of July, with Northern Man Ryan arriving a day later due to “unavoidable commitments”.

Hayling Island greeted us with glorious sunshine, 25 degrees and a 15-18 knot sea breeze. Less inviting was the 2 knots of tide running out of Chichester harbour which was kicking up a vicious standing wave at the harbour mouth which had to be negotiated by anyone who wanted to go between the beach and the race area during an ebb tide. In the time it took to unload the van the lifeboat was called out to drag in four moths that had ignored the warnings given by the club. Included in the four rescued was at least one Extreme 40 helm and a 49er Olympian.

The UK Nationals served as a practice event for the Worlds and was certainly an eye opener for the Irish who had not competed in such large fleets of foilers before. The light winds led to an unusual starting tactic whereby the majority of the fleet would sail around well above the line on the foils, and then with about 30 seconds to the start make a frantic dash downwind to dip the line and start the race. The fleet is also strangely comfortable with starting on port. Even in ten knots it can lead to a pretty exciting few moments with closing speeds of over 40 knots. Miraculously the Irish managed to escape the warm up event unscathed.

After a lay day which allowed for frantic foil polishing and last minute adjustments to ride height systems in the hope of conquering the expected swell the real racing started on Friday the 18th and there was the breeze and swell that everyone had expected. Unfortunately it didn’t last and most of the week was spent in light 8-12 knot offshore winds, with plenty of long postponements.

In the end 14 of the scheduled 18 races were sailed and top of the Irish in 36th place was Rory Fitzpatrick whose secret training over the last few months paid off, although Ryan Seaton was only just behind in 45th. Annalise and Alistair were separated by just a place in 87th and 88th respectively with John Chambers just behind in 97th.

John’s result was particularly remarkable as he was sailing the very first “Voodoo Moth” a new build by Chris Allen (the man who built Voodoo Chile a few years back). Over his time in Hayling John did an extraordinary amount of work on the boat which was only out of the mould a few weeks, bringing it from a prototype to a boat which was very competitive by the end of the event. If the progress continues Ireland will have its very own boat which will be able to compete with the UK and Australian designs which have dominated for the last few years.

The 2015 Worlds are being held in Melbourne next January and despite the distance at least three Irish boats are expected to travel to what has to be one of the most incredible sailing events.

For more information on the Irish Moth Fleet visit www.mothireland.com