Laser Round the Island Race and season prizegiving

Thirty-one Lasers took part in the annual Round the Island race which wraps-up the laser frostbite series on Saturday 12 March.  The lineup included very welcome visitors from Cork (Ed Rice and Robert Howe) and travelers from nearer places i.e. the Irish, the George, Clontarf, Malahide as well locals who were ‘missing in action’ for the rest of the season.  Two races were sailed; a short WL followed by the main event around the Island in a southerly breeze of 10 – 12 knots.  The WL race went without a hitch with Robert Howe (all the way from Monkstown Bay SC), showing the local standard sailors a thing or two with Ewan McMahon and Daniel Hopkins winning the radials and 4.7’s respectively.

The black flag was called into action by race officer Neil Murphy for the Round the Island race as enthusiasm or jumpy nerves got the better of the fleet on the first attempted start.  The short beat the up the sound to the windward mark saw the fleet spread out markedly as the leaders set a fast pace.  Following the downwind leg to the starboard hand turning mark the fleet split as usual…..  The majority of the fleet made the decision to round the Island in an anti-clockwise direction.  A no-brainer really given the tides; the remainder (about 8 boats including the author), more in hope than expectation, rolled the dice and went clockwise.  Behind Island’s eye the sailors encountered the usual fluky conditions and bumpy seas; some of those reaching/surfing managed to capsize in the somewhat benign conditions (no names) while those going clockwise were beating one second and on a reach the next.   The outcome was predictable however, luck played no part this year…..when the fleet met again at the turning mark the anti-clockwise boats were miles ahead.  Paul McMahon sailed with his usual pace and skill to defend his title, second was Paul Keane from RIYC and Ross McDonald in third.  The Radials results first to third, were; Ewan McMahon, Aoife Hopkins and Sophie Kinirons.  In the 4.7’s Daniel Hopkins took line honours followed by Aisling Kilmartin and Shane O’Brien. The team prize went to Aisling Kilmartin, Paul Keane and Gary Sargent. 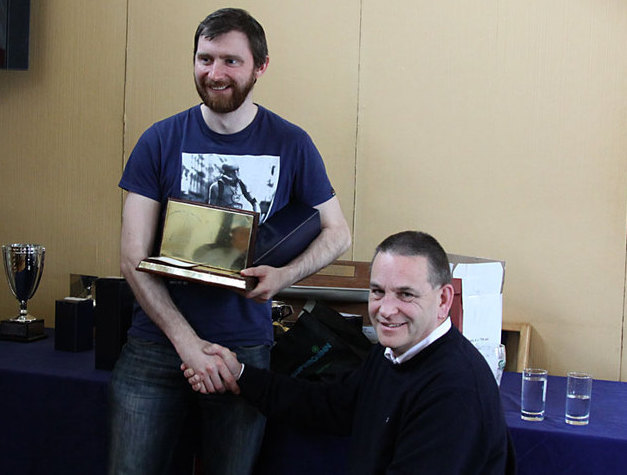 The race was followed by the prize giving and lunch, with Ireland outplaying Italy at rugby on the telly.  The personality prize went to John Doran for his quiet efficiency in driving the Sea Witch all season and ‘most improved’ participant this year went to Mark Kennedy.

After another great season for the Laser class thanks must go to; Christine Kerley and John Deane on results/prizes/photos, Niamh Hopkins for general support, Brian Turvey for uploading race reports,  Fergal Kinsella for officiating the prize giving, all those in the class who turn up each week.  Finally to the race committee of Harry Gallagher, Neil Murphy, Richard Kissane, Liam Dinneen, John Doran and Davie Jones.  Neil also doubles up as on the water photographer in his spare time!

Very special thanks to our prizes sponsor: CH Marine who were very generous.