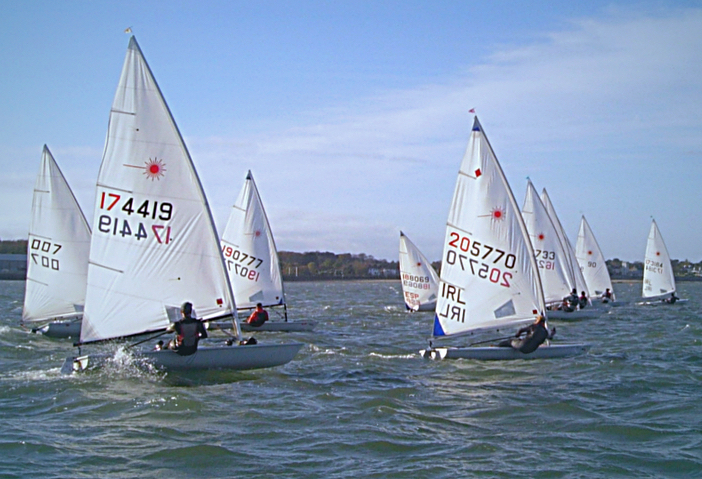 The 41st running of Howth Yacht Club’s Laser Frostbites came to a conclusion this morning on a cold, sunny day with a light Westerly breeze. The absence of current Laser national champion Ronan Cull, the winner of the last few series meant that somebody else was going to have an opportunity to take the event. Dan O’Connell and Daragh Sheridan stepped forward to take a series each.

O’Connell took the series before Christmas in impressive style with a string of first places and showing very impressive pace and smart sailing to clinch the nine race series. He was followed in second by Stephen Quinn who was using the impressive new radial cut full rig for the first time. Third was Mike Evans followed by Daragh Sheridan and Darrell Reamsbottom in fourth and fifth.

The second series was a mixed bag in terms of conditions starting in light wind in January and then was blown out for a lot of February. Robert Eason and Garry Sargent sailed extremely well in the light airs but their results suffered slightly in the heavier stuff later in the series. This allowed Daragh Sheridan to take the event overall with a consistent set of results in the varied conditions across the thirteen race series. Mike Evans and Robert Eason completed the podium positions with Gary Sargent and Dave Kirwan in fourth and fifth respectively.

In the Radial rigs the Winter series was won by Olympic hopeful Aoife Hopkins followed by Sarah Gallagher and R. Murdock. Sarah went one better in the Spring series to take first overall with a very strong series including a string of first places. Murdock taking second and Hopkins third.

In the 4.7 Shane O Brien won the first series from Daniel Hopkins and R. McEvoy. The order was reversed in the second series with Daniel taking first from Shane with E. Gallagher in third spot.

A special shout out to Frostbite competitor Gary Sargent who is undertaking the mammoth (slightly mad Ted!!)  task of sailing a Laser around Ireland. Please follow his big adventure on www.onewildride.ie/ and https://www.facebook.com/onewildride.ie/info. You can donate to his charity of choice Childvision on the website.

Next Saturday sees the annual Round the Island race with a fantastic day of sailing followed by lunch, beers and rugby on the big screens. All welcome. Entries online or on the day.

Twenty two lasers braved the cold spring weather for the final two races of the Spring Series. The light conditions and the strong ebb tide meant the race committee was not able to sail 3 races as was hoped.  Next Saturday will be the annual Round Island where tactics and luck usually throw out a few surprises as well a few returning veterans for a day out.

Race 1; the race management team decided on a triangle - sausage course and with the strong ebb tide setting against the beat meant there was only one way to go – left towards the beach.  The race was shortened at the second windward mark in an effort to fit in three races. Stephen Quinn took off at the start and led to the finish in fine style and with a big cheesy smile.  Mike Evans took second with Daragh Sheridan in third; Daragh was leading series at the start of the final day and was clearly keen to stay close to the top of the fleet.  Though mind you, with the lead he brought into the final day any result would probably do.

The radials had three boats out for the final day with Sarah Gallagher following up her recent strong performances with a bullet in the race. The 4.7 fleet had 4 competitors with Daniel Hopkins taking honours in race 1.

Race 2; the line was set with a greater pin end bias – it was like bees to honey – most of the fleet headed to the pin.  The traffic was such that a general recall was needed, the black flag for the second start put manners on everybody and all were clear. Stephen Quinn pulled off an excellent port hand start, the ebb tide pushed a lot of the starboard handers onto the pin and in the ensuing chaos Stephen got clear away.  A second bullet on the day for Stephen was not to be however as Sean Craig found some awesome speed and won the race by the best part of a leg in the end with Daragh Sheridan in second place.

In the radials Sarah Gallagher won again and took the series 12 points clear of Rory Murdock followed by Aoife Hopkins in third.  Daniel Hopkins finished the second race and the series with a win with Shane O’Brien (second) and Emma Gallagher in third.