Shane and Donal report on a 'Classic' Sydney-Hobart race 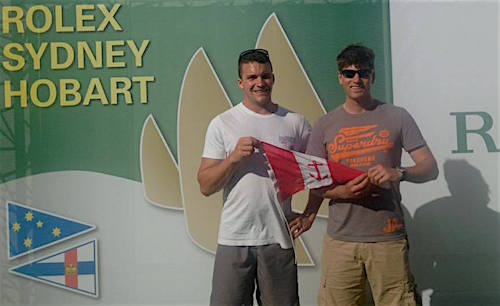 Shane Diviney and Donal Ryan report on their experience of the 2015 Rolex Sydney to Hobart Yacht race. Shane was sailing in class zero on the JV62 Chinese Whisper, while Donal was on Discoverer of Hornet owned and crewed by members of the British Armed Forces.

The Hobart was the pinnacle of a 6-month campaign for Chinese Whisper beginning back in July when the recently re launched boat took 2nd overall in the Sydney to Gold Coast Race. The team is made up of a mix of armatur sailors and some very experienced ocean racers. The crew of 17 can count upwards of 130 Hobart races between them as well as numerous round the World Races. The lead up to the ‘Great Race’ had been quite successful for the team taking a wins in the penultimate offshore race in the season point score as well as the SOLAS Big Boat Challenge on Sydney harbour.

‘St Stephen's Day’ morning was a reasonably relaxed affair, with a 1pm start everybody was relaxed and saving energy for the beating we were about to get on our way down the New South Wales Coast later that evening. The forecast was as predicated, building NE sea breeze funnelling down Sydney harbour at about 12-15 knots. As we motored out the start line the reality of this great occasion started to become apparent. The harbour was awash with hundreds of spectator boats and more than 10 helicopters in the air which made for an incredible atmosphere. All 109 boats picked their way through the harbour as they finalised sail selection and their approach to Sydney Heads.  We were satisfied with our sail choice for the beat up to the heads and set up at the port end of the line. We short tacked our way up the harbour carving out a course through the fastest boats in the fleet. The speed and power of the four 100ft super maxis became apparent as they cracked their sheets for the blast reach across the heads. Chinese Whisper had great beat up the harbour and exited the harbour 6th, just ahead of the VO70 Black Jack and our closest rivals, Ichi Ban, the Carkeek 60. We set our A4 and took off down the NSW coast at around 18knots of boatspeed. 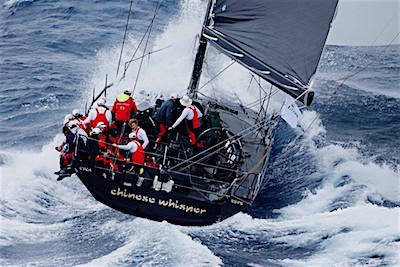 The forecast had a ' 'Southerly buster' hitting the fleet between 8pm and midnight, depending how much progress to the south we had made. We gybed onto starboard at about 2130 in 20-25 knots of breeze. Very suddenly the sky in front of us went pitch black and within a few minutes we were smacked with 40- 50 knots of cold air from the south. We managed to get the A4 down without breaking the boat or the crew and carried on with 3 reefs and our J4. The wind built and we became so overpowered that we dropped the main and sailed under jib only for a few hours, still managing upwards of 10 knots boat speed but sacrificing a lot of height. A long night on the rail ensued and by sunrise we still had in excess of 35 knots on the nose with 3 reefs and a J5. At little over 10 tonnes Chinese Whisper is light. With its flat bottom and narrow bow section the boat took quite a hammering through the choppy sea state. We slammed our way upwind for around 30 hours before the pressure started to subside. We did well to get through the front without any damage and to our delight we found out were up to 7th on line, due partly to the unfortunate retirement of a number of boats including Wild Oats XI and Perpetual Loyal. We were within a few miles of Ichi Ban on the morning of the 28th. We spent much of the day playing shifts and trying to get back to the right of the Carkeek 60. Eventually we got inside them and took the lead. 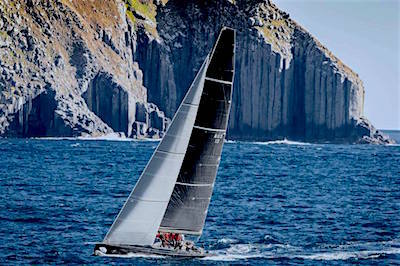 We reached the famous ‘Organ Pipes’ of Tasman island shortly after sunrise on the 29th with about 2 miles on Ichi Ban. We continued to beat up Storm Bay playing the shifts and loosely covering our rivals on the Carkeek 60. The whole way up storm bay the rail chat consisted of story after story of ‘parking it in the Derwent River’ and how many races were won and lost in the last 10 miles up the river. Sure enough the Derwent lived up to expectations. We turned right at the Iron Pot and blasted down the river under our Code Zero at 15 knots but we could see that our luck was about to run out with boats ahead sailing in other races becalmed and showing massive variations in wind direction. We held our zero through some very light patches and manged to coast our way slowly towards the new breeze along the shore. In the meantime Ichi Ban were closing down on us under spinnaker. Alas Ichi  Ban ran out of breeze and we managed to hook into a nice NE breeze along the shore to power us over the line under A1.5 at 1.18pm. The reception we received as we came into constitution dock was marvellous with people lining the dock to welcome Chinese Whisper as the 5th boat across the line. We had exceeded our expectations in terms of line honours but time would tell how we would finish up on IRC overall as we anxiously watched the progress of the smaller boats in the fleet. The IRC win wasn’t to be but were satisfied to win our division and to finish 5th overall on IRC. In the end the overall race was won by the TP52 Balance with Comanche taking line honours. Have a look at some more of the images of Chinese Whisper in the gallery here 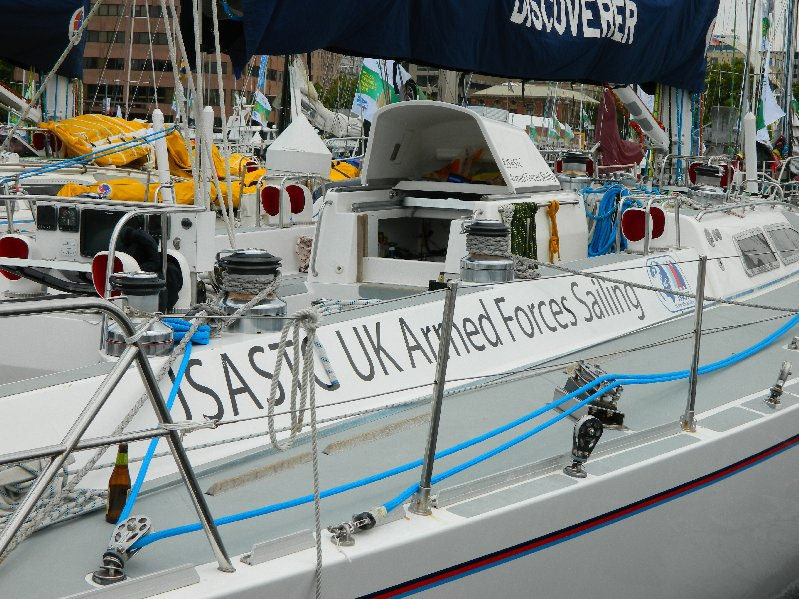 From Donal Ryan on Discoverer of Hornet:

The 2015 Rolex Sydney Hobart race gave us a taste of everything that the ‘Great Race’ is known for. There was an excellent beat out of Sydney Harbour, a fast downwind VMG run in 20-25kts towards the Bass Straight, Gale force winds in excess of 40kts on the nose in big seas and fluky conditions in the Tasman Sea and the Derwent River. Whether you were in a thorough bread race yacht or a fifty seven ton tank of a boat, the race threw up some challenging and testing conditions. I noticed several differences from offshore sailing in Northern Europe. Tactical decisions based on tidal gates, subtle wind shifts and looking at how a particular weather system or front will behave are very different. The Hobart requires strategic planning around several pressure systems, ocean currents and strong winds that are capable of shifting 180 degrees with little or no warning. This happened with dramatic consequence on the first night, catching much of the fleet off guard and causing a lot of damage to many boats and forcing almost a third of the fleet to retire through sail, rudder and structural damage. Both Shane and I witnessed the effects of this whilst barreling along under spinnaker, albeit a few knots quicker on Shane’s boat ‘Chinese Whisper’. The most exciting and difficult moments of my race were being called up on deck pulling on my lifejacket and harness to spike and drop our spinnaker when, with the pole squared back and traveling at 15Kts, the wind swing forward and we were soon being blown back towards Sydney in a gale. What followed was a long ordeal of dropping the out of control kite, peeling to out smallest headsail and sorting out the foredeck, all in approx. 30kts of breeze in a big sea making life difficult and communication almost impossible. The breeze built to over 45kts as the new weather system settled in and this whipped up some large seas, pummeling the exposed crews on deck and leading to some gut wrenching movements of the boat. Within 36 hours however, we would find ourselves completely becalmed, a welcome respite but extremely frustrating to watch smaller, lighter boats cruise by. We reached the Derwent river in the early hours of new years eve and match raced a Clipper 70 in shifty winds towards the finish line, arriving a couple of days behind Shane on ‘Chinese Whisper’ who won their class against strong competition, and forty five minutes ahead of our only real competition: the RAF and Royal Navy on another steel Challenge 72 yacht (or ship as we reckoned the 57 ton craft should be called). I can’t complain however, as the opportunity to do it was given to me through work.

To sum up the Sydney Hobart:

1. A fast boat is handy if you want to guarantee NYE in Hobart.

2. The sea is actually quite warm when it soaks you during a sail change, a welcome surprise.

3. Be prepared for literally any and all weather conditions.

4. The race is great fun and the welcoming reception in Hobart is excellent.