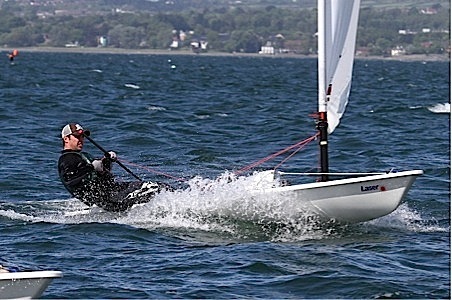 The 2015 Irish Laser National Championships were run over 4 days in the National Yacht Club from the 20-24th of August.  Eight HYC members competed in the event while 3 other HYC Laser sailors were completing at events in Canada and far-flung Malahide!

On the first day Thursday the 20th winds were in excess of 20 knots and launching wasn’t for the faint hearted!  Two races were planned but only one race was completed in conditions that tested both sailors and race committee alike.

Race officer Con Murphy wisely caused it a day after the first race as tired sailors limped home. Friday’s forecast looked even worse and the expectation was that three races would be difficult to complete. However 3 races were run with HYC sailor Ronan Cull taking two bullets and a second. Colin Leonard from Ballyholme Yacht Club followed close behind on 2nd, 1st and a 2nd.

Other sailors in the standard rig were Conor Murphy taking a 6th and two 11th’s. Troy Hopkins received a daily prize for best Master with three 14th finishes.

Over in the radial Fleet HYC was represented by Richard Hogan who had his best race of the series scoring a 9th in the final race of the day. Also in the radial fleet was Nell Staunton who scored a very solid set of results over the 4 days.

In the 4.7’s Alex Kavanagh led Daniel Hopkins and Shane O’Brien (who has recently moved from the Topper) and scored his best result in the middle race of the day finishing in 11th position.

A lighter forecast was promised for Saturday and with once again three races planned all sailors heaved a sigh of relief. The conditions proved to vary from 10-18 knots not the wished for 8kts. Once again Ronan showed the fleet how it was done scoring a 1st a 2nd and a 3rd. Daniel Hopkins also had a great day with a 2nd, 11th and won the last race after port tacking the fleet from the pin end mark. This moved him up to 9th position overall.

Sunday was an absolutely miserable day for sailors and spectators alike as the rain never ceased. Finally the longed-for lighter winds made an appearance. Once again Ronan was first out of the stalls and won the first race.  He then retired as a very important family member’s 85th Birthday had to be attended! But he had already done more than enough to secure the 2015 title of National Laser Champion.

In the 4.7’s a large group were flag flagged in the last race with them Daniel Hopkins. Daniel was HYC best finisher in the 4.7's in 10th position and Richard Hogan was the best in the radials in 18th position. The National Yacht Club did a great job of hosting the Championship in very difficult conditions and it’s fantastic to see the 2015 National Title being brought back to Howth.