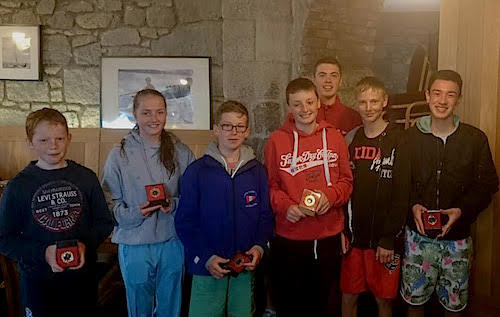 On Thursday the 16th of July the Royal Irish Yacht Club hosted the Interclub team racing event. This event was held in Feva's a boat none of our junior team racers sailed but undeterred an application was duly submitted.

In the week of the event the forecast for Friday the day the team racing was due to be held was dire with winds in excess of 30 kts and rain. The RIYC made the call to bring the event forward to Thursday. This created lots of scrambling around, emails and phone calls on the Howth end to see if the sailors and coach were available.

Unfortunately the HYC team were dropping like flies, one succumbed to a tummy bug, one had a previous 420 training commitment and one simply couldn't do Thursday. What to do? As the remaining 3 team racers were mad keen and the coach was available the decision was made to sally forth. Crew were supplied by the RIYC and the HYC helms of Sam Crawford, Jack McMahon and Daniel Hopkins took the dart early Thursday morning with coach Richard Hogan.

Racing combinations and SI's were discussed on the journey to Dun Laoghaire. Once the team arrived Richard gave the HYC boys a quick lesson in rigging a Feva.

Light winds and a persistent drizzle were the order of the day. 4 races were sailed in the qualifying round against RSGYC, RIYC1 & 2 and NYC, HYC won all four! Time for the finals against NYC and RSGYC. Again the HYC boys won both races.

A BBQ was supplied by the RIYC and prize giving followed shortly afterwards. A fantastic fun day was had by all and the boys are hoping to do more team racing soon.

Thanks to the Royal Irish Yacht Club for organising.

(Top photo: Sam, Jack and Daniel with team coach Richard and crews Heather, Andy and Kevin at the prizegiving)