Ross and Dylan join 'Antix' for the RORC IRC Championships 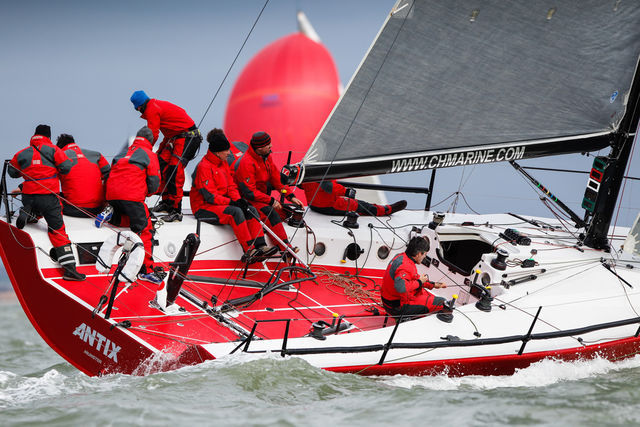 The Royal Ocean Racing Club's IRC National Championship kicks off this weekend with the hottest racing fleet since six TP52s took part in 2008. The inshore regatta features three days of intense racing on tight Solent courses, with top competition from Belgium, Britain, Ireland, Germany and the Netherlands. Right through the 46 yacht fleet, there are National, European, World and Olympic medalists racing.

At least 13 yachts will contest IRC One, including a bevy of downwind flyers. Piet Vroon's Dutch Ker 51, Tonnerre 4 will have multiple world champion, Jeremy Robinson as tactician and Volvo Ocean Race sailor, Paul Wilcox on the helm. The brand new one-off design, Spectre, built by Persico in Milan and designed by Mani Frers, is led by two-time Olympic Silver medalist, Nick Rogers and includes America's Cup sailor, Jeremy Elliott amongst the crew. Christoph Avenarius and Gorm Gondesen German Ker 46, Shakti will have a young all-German crew.

Of interest to Irish and Howth sailors, the reigning IRC National Champion, Antix, returns from last year as a new boat. Ireland's Captain for the victorious Brewin Dolphin Commodores' Cup team, Anthony O'Leary, will be at the helm of the turboed Ker 40, Antix, which blew away the opposition at this year's RORC Easter Challenge. He is joined by Howth Yacht Club's Dylan Gannon and Ross McDonald, both of whom will have to miss a party in HYC on this Friday following their success at the ICRA Championships and Sovereigns Week in Kinsale recently. IRC One also features a significant number of other yachts capable of planing at ballistic speeds downwind; Carkeek 40 Rebellion, GP42 Tokoloshe II, HH 42 Oystercatcher XXX, three Ker 40s: Antix, Hooligan VII and Baraka and Sir Keith Mills' Ker 40+, Invictus.

Owner and driver of Antix, Anthony O'Leary, is full of admiration for the regatta, having competed in the last ten editions. "You have to think very long and hard to come up with any event within these islands that can match this group of yachts. The championship has always attracted the fastest yachts but this year it has been taken to another level, this will be very different to Easter, we expect some real fireworks, especially off the start line."

"I am like the quarter back waiting for the ball." joked Peter O'Leary. The double Olympian is expecting the birth of his first child and this year will be staying at home in Crosshaven. "This will be the first one I have missed for as long as I can remember and it is looking like a cracking competition. Antix will have it all to do and I know they are up for the biggest inshore regatta of the season. Antix is a fast boat but is rated only the eighth quickest in the regatta - I think that says it all."

National, European and World Champion, Robert Greenhalgh has just returned from his 4th Volvo Ocean Race and will be calling the shots at the back of Sir Keith Mills' new Ker 40+, Invictus.

"This line up really shows where racing is going in the Solent" commented Robert. "The light displacement 40 footers are here in numbers and the perfect size and speed for racing in our own backyard. There is a great mix of professionals and amateurs in the fleet and that to me is very healthy. You need the professionals to up the game for the whole team but amateurs bring great enthusiasm as well as keeping the cost down. It is a bit early to look at the weather really, but at the moment conditions are looking perfect. We could see 20 knots of gradient wind on Friday and the potential for a good sea breeze for the rest of the weekend. It is great to be back in the Solent again and in boats that I really enjoy racing - it's going to be all on from the first gun."

Jim MacGregor's British Elan 410, Premier Flair (centre) - photo RORC/Paul WyethIn IRC Two, at least 14 yachts will be on the start line including Jim McGregor's Elan 410 Premier Flair. Back to defend the class title, Jim often races with his two Olympic sailing daughters, Lucy and Kate. Grand Soleil 43 Quokka 8, overall winner in 2011, scoring straight bullets, will be competing and sailed by RORC Commodore, Michael Boyd & Peter Rutter. Nick Haigh's Farr 280, So Steamy, will be the smallest boat at the regatta but far from the slowest. Applying the pressure will be Steve Cowie's Zephyr, sailed by Scotland's Kev Miller, which was runner up last year and is one of four First 40s at this year's regatta. Martin Dent's J/111, Jelvis was top British boat at the J/111 World championship in Newport, RI, this summer.

In IRC Three, at least 14 yachts will be competing including last year's class runner up, Willem 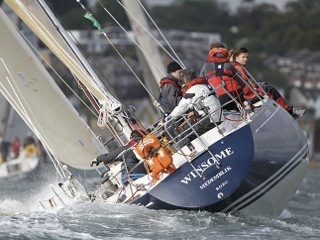 Schopman's BH36 Intention, returns with a Dutch and Belgian crew, as does James Chalmers Weymouth crew racing J/35, Bengal Magic were class winners in 2013. In IRC Four, Italian born America's Cup designer, Giovanni Belgrano, races the 1939 Laurent Giles one-off, Whooper, which was the overall winner of this year's JP Morgan Round the Island Race and class winner of the RORC IRC National Championship in 2004. Harry Heijst returns to inshore competition with his Dutch S&S 41 'Winsome' on which HYC's Laura Dillon is a regular crew.