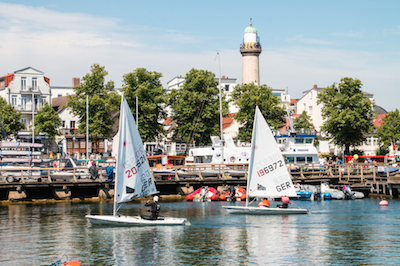 HYC sailor Ewan McMahon travelled to Warnemünde in Germany for the Laser Europa Cup 4th- 7th July 2015 and finished in a spectacular 3rd place overall and 1st Under-17. Below is his report that, with commendable humility, masks his outstanding performance in the Laser Radial last weekend:

There were approximately 140 Laser Radials entered (74 in the boys fleet) with Ewan and Erica Ruigrok from Rush were the only two IRL sailors in Radials.  Finn Lynch & Darragh O’Sullivan were IRL Development squad sailors entered in full rigs.

The laser radials divided into two fleets, Girls and Boys. The temperature was about 32C.  There was very light airs in the morning.  Sailors were hoping for a sea breeze but it never really developed and the fleets were sent to race with 5 knots in the afternoon(2pm).

The girls fleet got the scheduled two races and the boys only got one race as the wind began to die off. The starts were hectic with multiple ”Black Flag” (x5) starts, sailors being very aggressive and high on the line. Roughly 25 sailors from the boys fleet were caught out from this.  This penalty was  carried through to day two for the 2nd race.

There was little wind forecasted for day two, nothing filled in even though it was a scorching 36C and racing was abandoned at 15.00.

Excellent sailing conditions with 18 to 20 knots of wind from the west, big rolling waves and temperatures remained nice and warm. There were three races scheduled. Starting well and racing fast, Ewan finished 6th, 3rd and 2nd throughout the day.

It was a similar story unfortunately as day two except there was initially a 7knot gradient wind from the shore which was burned off by a sea breeze. The OD tried his best for a race as there was another 3 races scheduled for this day but the wind was too unstable for a fair race. We were sent ashore at 13:30 with no race completed.

The event as a whole went well, Ewan finished 3rd overall and 1st u17. 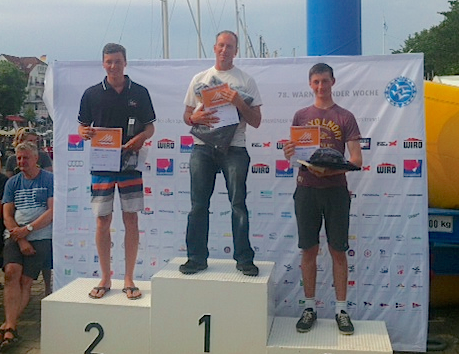