17 boats from HYC prepare for Sovereigns Cup and ICRA Nationals 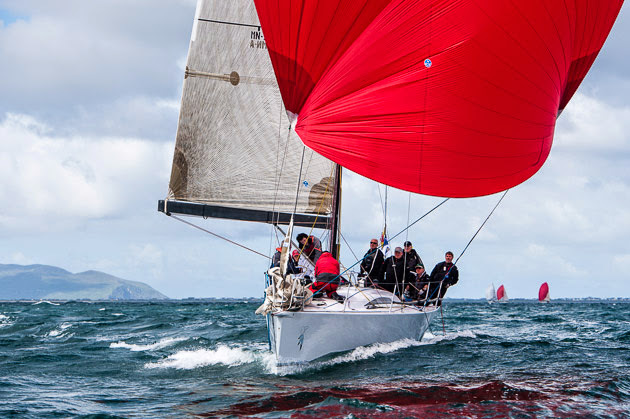 HYC will be well represented in this season's cruiser racing flagship event, Sovereigns Cup incorporating the ICRA Nationals, having boats racing in every class. 17 Howth boats have made the trip south to Kinsale and those who travelled by sea experienced tricky journeys over the weekend.  The weekend brought a strong south westerly, 20-25 knots coupled with short steep seas.  For the boats that travelled by sea, they certainly feel like they earned a beer on arrival.  The real winners last weekend were those fortunate enough to be able to tow their boats south.

Racing starts Wednesday with two races scheduled for each day (with exception of white sail fleets who generally sail one per day). Best of luck to all taking part!

The runners and riders:

Nobby Reilly's 'Crazy Horse' is the lone fighter in IRC 0 where she will race amongst a mix of 11 race boats and large cruiser racers.

Conor Fogerty's 'Bam' is the scratch boat in IRC 1.  BAM is joined by Pat Kelly's 'Storm', in a fleet that contains another eight J109's!

Unfortunately for 'Dux' in IRC 3, their engine trouble en route means they will not make the regatta.  It is therefore left to the remaining HYC boats to carry the baton in the always competitive Class 3.  Richard Colwell & Ronan Cobbe's 'Fusion' will be racing their Croby 25 against 4 sister ships and will also be racing for the Celtic Corby Cup against all Corby designs in the various classes.  Aidan Callely's 'Viking' and Paddy Kyne's 'Maximus' will be taking over the void left by Dux.

Eddie Bourke's 'Starlet' will lock horns with the K25 team's 'Kilcullen' for the spoils in IRC 5. The highly modified quarter tonners are also racing in this class.

IRC 5 or White Sail 1 see Colm Bermingham's 'Bite the Bullet' return to familiar victorious grounds as he seeks to defend his Sovereigns title from two years ago. Roger Cagney returns after an absence with 'Hansebacker'.

IRC 6 or White Sail 2 sees Steffi & Windsor also looking to defend their title, this time it is last year’s ICRA title they will want to keep on the mantelpiece on board 'Demelza'.

There is a HYC crew party organised for after sailing on Wednesday at 1700 in the White Lady (directly behind the KYC Clubhouse). Please come along for a drink to share your thoughts on the day!  Let’s work together, except those in the same class (!), and lets bring home as many national titles as we can.