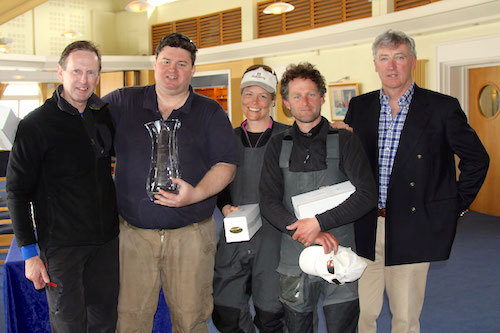 There was not much enthusiasm on the dock Saturday morning due to the wet and dreary climate. The breeze of 20 to 25 knots in the first race soon brightened up everybody’s mood once the kites went up. Sin Bin (Michael O Connor, Owen Laverty, Kevin Johnson) dominated the first race winning the slightly biased pin off the start line. Sin Bin showed great boat speed to comfortably lead all of the way to the finish. Sin Bin looked to be back on form following their Spring Warmer win. After the first downwind leg Rugby Blue (Aidan O’Connell, Killian Collins, Ben O’ Donahoe) and Corona Extra (Graeme Grant, Ronan Downing, Breffni Jones) pulled away from the rest of the fleet and engaged in a duel up the next beat with Corona Extra climbing to second by the next weather mark. This is where the top 3 finished with Venuesworld.com (Ger Dempsey, Chris Nolan, Rory Groves) winning the battle of the pack to take 4th.

The breeze moderated for the second race with the tide becoming more of a prominent force to the east, carrying the boats north to the weather mark. Corona Extra pulled out a sizeable lead on the first downwind leg only to see the lion’s share of it disappear on the second beat when a 30 degree shift to the east pulled everybody on the right side of the course up to their transom. Corona Extra just held off The Bear (Kieran Dorgan, Jason Losty, Ewan O’ Keffe) at the second leeward gate to lead them to the finish.  Sharkbait (Darren Martin, Simon Murray, Andrew Killops) held off Venueworld and the rest of the pack for third.

The third race of the day saw the breeze drop to approx. 10/ 12 knots negating any chance of planning downwind. Thankfully the rain eased off as the breeze calmed down. Corona Extra got off the middle of the line fast and caught the first shift to jump into the lead. The downwind legs where considerably more trying with narrow lines of breeze streaking down the course. Corona Extra lead to the finish with Venuesworld.com building on their consistency with a comfortable second followed by Dinghy Supplies grabing a decent result of third to help ease the pain of the previous 2 sevenths.

The crews hit the bar early to try and warm up after the wet days sailing. With the prawn festivel on in Howth that weekend, the club surpassed itself with a fantastic meal that evening. The first days sailing left Corona Extra out in front on 4 points followed by Venuesworld.com on 10 points and Sin Bin on 17 points with effectively the rest of the fleet just behind them, all looking to discard a race from their first days sailing to get back in the hunt. The Sunday was a much sunnier affair with enough of a light breeze for the day, varying between 5 to 10 knots.

Race 4 saw Corona Extra get buried off the line and sucked to the back of the fleet rounding the weather mark in fourteenth. The race was won by Dinghy Supplies building on their third in race 3 followed by Seriously Bonkers (Stephen Lee, Peter Lee, Michael Galvin) in second and Venuesworld.com maintaining their consistency with a third.

Race 5 was won by Sharkbait with Bad Kilcullen (Stefan Hyde, Enda O’Coineen, Jimmy Dowling) taking second and Dinghy Supplies taking third. The race was dominated by 2 persistent shifts to the east which accounted for a lot of snakes and ladders with the fleet. After allowing for a discard, this left Corona Extra with a much narrower overall lead of 3 points on 10 points overall after scoring  2 sixths in races 4 & 5. Venuesworld.com held second place on 13 points with Dinghy Supplies now after charging up to third on 14 points. 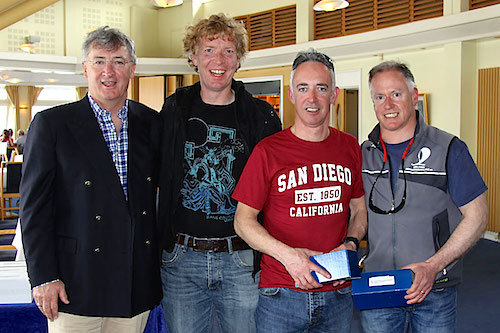