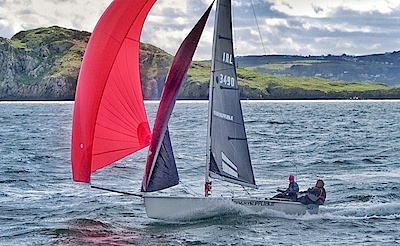 The SB20 class will kick off their 2015 regional events with the Eastern Championships at Howth Yacht Club next weekend on the 25th & 26th of April. The event is being generously sponsored by Lennon Earley Crotty Insurance Brokers.

There is a particular buzz in the class at the start of this season as it is anticipated that around twelve Irish boats will travel to Lake Garda for the SB20 World Championships in July. As a result everybody is keen to get off to a good start at this the first regional.

Competition will, as ever be hot in the exciting one design class. Michael O’Connor comes into the event in great form as the winner of the recent Spring Warmer in Howth. Also expect to see Ronan Downing, Darren Martin and Shane Murphy to the fore as winners of area championships last season. Also the 2013 Champion and runner up in 2014 Aidan O’Connell will be up challenging again alongside 2014 National Champions Jerry and Jimmy Dowling. Watch out for the consistent Davy Taylor to have a crack at topping the podium also. This weekend sees a welcome addition to the fleet in former RS400 hot shot Robert Espey from Ballyholme. It is also hoped that we will see Mary Creedon,  Mel  & Killian Collins out on the water but they will need babysitters with the recent arrivals to both families.

Online entry, NOR and Sailing Instructions are available here

Also there will be a 'Dublin Bay Prawn-themed' dinner menu in the HYC restaurant to tie in with the Prawn festival which will be running throughout that weekend. Bookings can be made  Mon-Fri at 01-8322141 and after office hours 01-8320606.