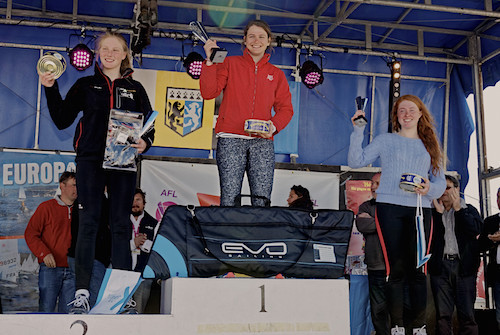 The laser Europacup in Brest, France ran from the 3-6th April. There were large  4.7, Radial and Standard rig fleets. Ewan McMahon and Aoife Hopkins (above left on podium) represented HYC in the Radial fleet. There were 150 sailors in the Radial fleet, including 9 Irish sailors. We were split into three random flights for the first three days (qualifying series) and then into gold, silver and bronze for the last day (final series).

Friday, day one, was the windiest day of the event. There was a late start and the two scheduled races were a lot shorter than anticipated, being only a half an hour each. 15-20 knots, small waves and shify wind made it a tough day for the lighter side of the fleet (as well as those prone to capsizing!) I got a 9th and an 11th (later discarded) and Ewan got a 16th and a 21st.

Saturday was characterised by 15 knots, flat water and shifty wind. The race officer must have been warmer today as our races were now an hour long! Another two races were sailed. I had a 5th and a 7th and Ewan got an 11th and an 8th, having a better day than the previous one.

Sunday dawned with tricky conditions. It was a tough day with 8-13 knots of shifty and gusty wind. It was a day to be 'in the zone' anticipating shifts by observations and constantly looking for the pressure. I had a 10th and an 11th while Ewan had a 22nd a brilliant 4th. This was the last day of the qualifying series.

Monday was the final day of the event and the only day of the final series. We were now in flights of gold, silver and bronze (50 in each fleet). Ewan and I both made gold fleet which we were both delighted with! It was another tough day (now even harder because of the high standard in the gold fleet). It was about 11 knots with flat water and yet again, shifty wind. I had a disappointing first race with a 27th but finished the event on a good note with a 6th. Ewan had a 22nd and 39th, finding the gold fleet hard after sailing the last few days in random flights!

All in all the event was a huge success. All the scheduled races were sailed, with two every day. It was also a happy day for the Irish as we had amazing sucess and lots of sailors on the podium. Liam Glynn (BYC) won the event, while Cian Byrne (RCYC) came 2nd. We were very close to having a full Irish podium as Ross O'Sullivan was 4th overall, missing out on 3rd but just one point! I finished up in 2nd position in the girls radial fleet ( 21st overall ) and Aisling Keller (LDYC) was 3rd (finishing 23rd overall). Ewan finished well in 43rd. For both Ewan and I it was our first Radial Europacup.

This weekend we are competing in the Youth Nationals in Crosshaven along with a few other HYC sailors, wish us all luck!