Moths down under - the inside track 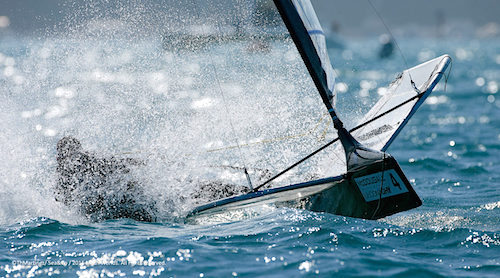 An exclusive report from Howth's own Ali Kissane following his trip to Australia to compete in this year's Moth Worlds, detailing the popular Irish involvement as well as looking forward to the next event...

The 2015 Moth World Championships were held in the holiday town of Sorrento, Melbourne, Australia. The venue hosted the 2008 49er World Championships and promised flat water and reliable seabreeze. Three Irish sailors made the journey to compete in the 170 boat fleet which included multiple Americas Cup skippers, Olympic medalists and offshore legends; Alistair Kissane from Howth Yacht Club, Annalise Murphy from the National Yacht Club and Ryan Seaton from Ballyholme Yacht Club. Special thanks must go to the Law family and the Murphy family (originally from Ballina) who were incredibly generous in taking the Irish sailors in for the event. The hospitality was so good that Olympic Sailor Ryan Seaton was deeply concerned by his weight gain during his time in Sorrento.

The World Championships was preceded by two days racing for the Australian Nationals title. Unfortunately, the ordinarily perfect winds were nowhere to be seen and there were two days of complete calm which meant the event was cancelled and the title was decided as part of the Worlds. The practice race the following day saw a welcome return of 15 knot South Easterly winds and a record-breaking single startline for all 170 boats.

The first day of real racing was reminiscent of the 2014 worlds with hot sun and extremely light winds. Despite the difficult conditions, both race officers did extremely well to squeeze in three races of marginal foiling. As predicted, the favourites for the event, 2014 Moth champion Nathan Outeridge (AUS) and 2014 49er World champion Peter Burling (NZL) were leading after the day. The second day could not have been a greater contrast with grey skies and 20+ knots from the North East which kicked up a steep chop in the shallow waters. Four races were sailed in the spectacular conditions and, after the first proper windy days moth racing since the Lake Garda Worlds of 2012, the fleet was in a state of high excitement. Almost everybody had a tale of a vicious “stack” (pitchpole)  or a struggle to make it through the particularly difficult chop between the beach and the race course on the way home. A good portion of the fleet also had pieces of splintered carbon to piece back together. At the top of the fleet, Burling demonstrated his superiority with a perfect day of four firsts.

The psychotic weather continued on day three for the first day of gold and silver fleet racing. Early risers were greeted by more strong north easterlies which rapidly died off to almost nothing, something which caught out at least two Americas Cup sailors and Olympic gold medalists who missed the start. One race was sailed in the fickle breeze and was won by Japanese sailor and fleet favourite Hiroki Goto who had a magic “Samurai” main foil which was extremely effective.

Again, in complete contrast, Day 4 was howling from the North with extremely steep waves. After several hours of waiting around, the fleets were invited to vote by show of hands on whether they would sail. The silver fleet, being wise and sensible, voted to stay ashore but the gold fleet, who were apparently far less intelligent, voted to race. After 30 minutes of spectacular capsizes, pitchpoles, foil, rig and body breakages, the fleet was sent home without any racing.

With two racing days racing left and only eight races sailed, the pressure on the race committee was huge, but luckily Day 5 brought strong, but manageable South Westerlies. Both gold and silver fleets managed four races, with Burling establishing what looked like an unassailable lead.

The final day's racing was too windy for Moth sailing. Again, the silver fleet voted with their feet and were stood down early, but the gold was sent out in waves and winds gusting over 30 knots. The rate of attrition was high but most of the fleet managed to make it around the course, despite almost infinite capsizes and where every turning point on the course was like a Moth graveyard, full of upturned boats and scared looking sailors. After a brief break ashore Race 2 was sailed in even more extreme conditions with only a quarter of the fleet completing two laps. Annalise Murphy was extremely unfortunate to lose out on the women's world title in the final race, when she broke her rudder gantry just after rounding the bottom mark in a phenomenal 6th place. She finished the regatta as the best placed Irish sailor in 56th place with Alistair Kissane in 58th and Ryan Seaton in 84th. Peter Burling ended the event in style with a win and took the title from Outeridge by an impressive 10 points.

The next major Moth Regatta will be the European championships in Holland this August with Ireland expected to be represented strongly with up to 10 boats, including Howth's Graeme Grant who will be racing the Irish built “Voodoo”.