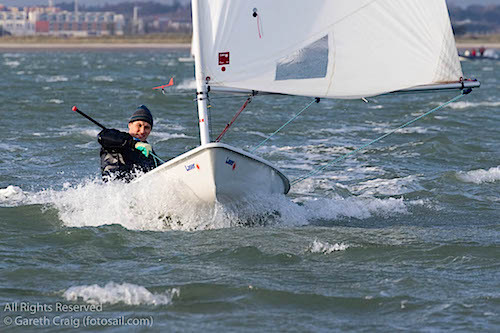 After slouching around in the dinghy park last week before the racing was abandoned, all sailors were eager to get sailing for the final day in the 40th Anniversary Howth Laser Frostbites Winter Series. This was despite the Force 6-7 (with gusts) forecast. The wind duly obliged, with 20-22 knots with gusts measured up to 30 knots from the Southwest.

The start line was further towards the Ireland's-Eye side of the channel due to the low tide. After a brief delay and plenty of sailors getting in some practice righting their boats, the combined (standards & radials) fleet got away at first time of asking. With the tide flooding, and a slight committee boat bias, there was a sizeable clump of vessels towards the committee boat.

Those who tacked-off to the right-hand side for more current in the channel had to contend with the extra chop plus came out the wrong end of a left-hand shift just before the weather rounding. Those who went left were led round the first mark by Daragh Kelleher followed by Dan O'Connell. Ronan Cull bent his boom up the first beat (too much Muy Thai?) and was jousting with the Radials, Dave Kirwan following around in 4th.

Plenty of stories of capsizes at at each of the marks on the first lap  - too many to mention - led to many place changes.

With the wind now approaching a 10 on the "Honk-o-meter", the first downwind run was going to be interesting  - certainly in this reporter's case, forget about leaving off the controls or going anywhere near your centerboard not to mind pulling it up.

The final lap saw Kelleher's lead extend to 50m coming into the graveyard of the final gybe mark - unfortunately "The Winner Takes it All" quickly turned into "Another One Bites the Dust" and not 1 but 2 capsizes later let O'Connell through the take the win with Kelleher second, Cull was third after a very well sailed limp around. Dave Quinn was fourth after a storming comeback from 12th at the first mark.

The two radials had a great race all the way around with Ewan McMahon beating Aoife Hopkins. The Race Officer made the eminently sensible decision to send everyone back home to seek respite in the dinghy park quickly followed by the bar.

Ronan Cull dominated the series and was first overall, Dave Quinn in second, and Daragh Sheridan in third. Congrats to all.

Top gun in the radials was Aoife Hopkins followed by Ewan McMahon in 2nd overall.

In the 4.7's Daniel Hopkins had a comfortable victory with no less then 7 firsts, with Alex Kavanagh the running up.

The class would like to thank the race committee for giving us great racing throughout the series. Also thanks to the rescue crews, H&K for their support, Gareth Craig on photography, and all who raced. 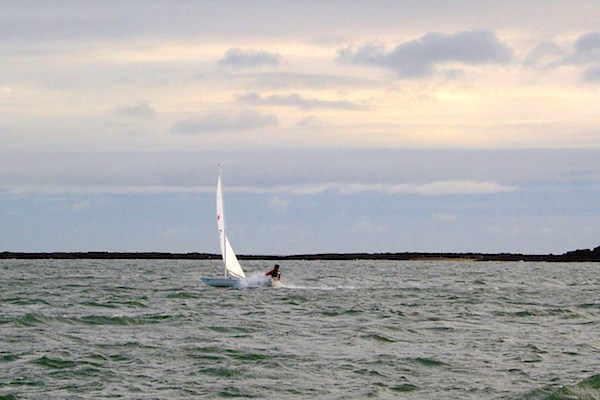