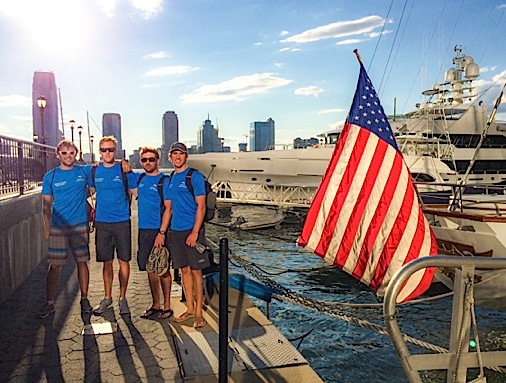 The location is spectacular, the competition is fierce and the craic is mighty. As soon as you step onto the North Cove clubhouse, the150-foot mega-yacht “Arabella”, to register, you get a feeling this is a fairly unique event. Read the rest of Simon Rattigan's report from 'HYC Team Red' below:

We got an early rude awakening about the seriousness of the tide in the Hudson River (thankfully in the practice race) when we arrived leading at the bottom mark. Our early kite drop wasn’t conservative, but disastrous, as we were soon travelling in reverse back up the course. The kite was re-launched and we got around the mark eventually in about 12th. “Right, there’s a bit of tide so” said the Tactician. 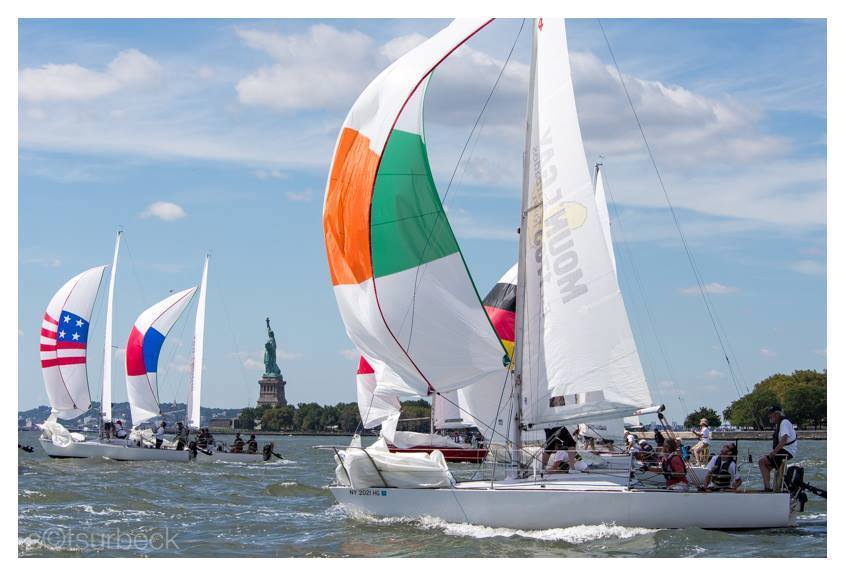 The crews rotated boats every race to make it as level a playing field as possible, which was definitely necessary as the quality of the provided J24s was very inconsistent. Friday’s racing was solid enough with a 2nd, 5th and redress in the third race (our boat had no starboard winch) so spirits were high ahead of the evening’s festivities. At a local restaurant, the big man Dennis Conner said a few words (which one poor Argentinian competitor soon learned should never be interrupted), after which each team was invited to sing a song. Rob Kerley didn’t have to be asked twice and so lead the charge. Stealing the show, the yanks took a shining to us - some more than others.

A definite highlight was Saturday night’s entertainment - a 3-hour cruise on the Arabella up to the Statue of Liberty and then up the East River – topped off by a free bar for the duration, which featured quite honestly some of the most spectacular views we’d ever seen. There is a huge focus on the social side of this event, so it was a great opportunity to have a drink or fifteen with great people from so many different countries.

We put in some good performances during Saturday and Sunday’s racing, leading some races for good stretches, and posting come consistent top 5 scores. Unfortunately we had two poor results in the event, and having lay in 3rd for most of the competition, we were slightly disappointed to have dropped to 5th on the last day. However, the high quality of the racing, the chaos of navigating the Hudson River’s heavy traffic and outrageous tides, and the social spirit of the event made for an unforgettable experience, and the team was delighted to have represented HYC at such a great competition. 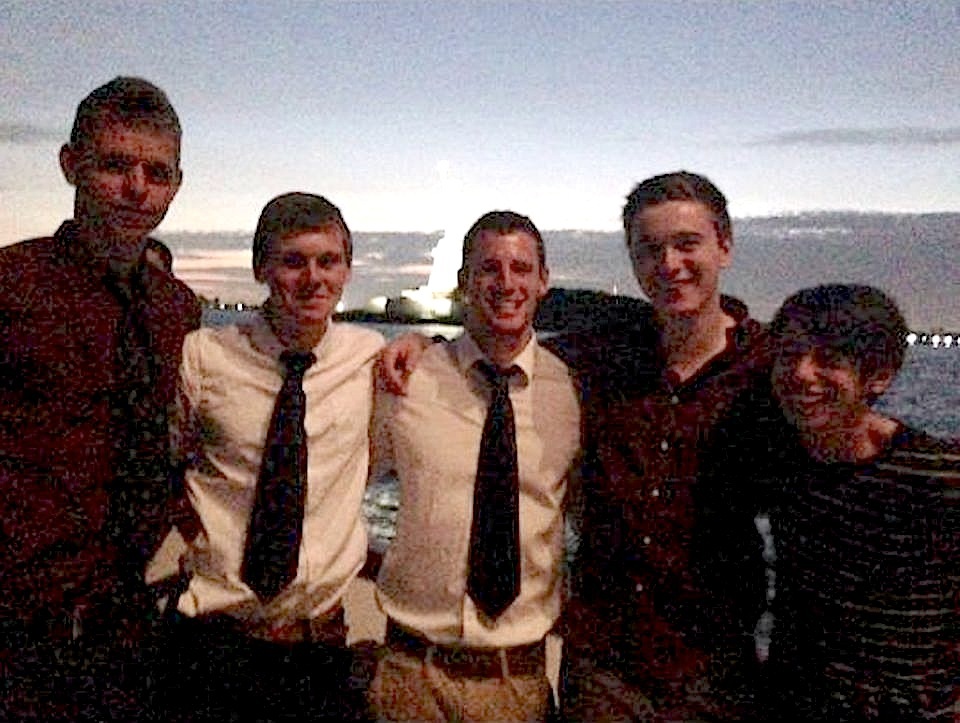 We arrived in New York on the Saturday before the event which gave us some time to settle in to our new surroundings and adjust to the time zone. It also gave us some time to check out the sights and some of the legendary eateries NYC had to offer. We made a pilgrimage to the Helly Hansen shop in Jersey Gardens that had unbelievable bargains on during their sale! We were staying with the kindest members of Manhattan Yacht Club during our stay and for their hospitality we are forever grateful.

The weather was magnificent with it rarely dropping below 25 degrees Celsius during the day and the rain managed to stay away except for one evening. This meant for fantastic shorts and t-shirt sailing throughout the regatta.

The standard of racing and competition was top-notch and a truly recognised leap from the previous year the DCIYCC was held. Some of those competing were Olympians (we managed to beat two of them!) and test-sailors for North sails!

We finished 10th overall, on joint points with Australia who pipped us on countback. We managed to clock up a 3rd in one of the races, and were always up towards the top at the marks. It was a very valuable experience and truly was a challenge. Sailing in the Hudson, with its fickle wind with large shifts and its different wave direction, certainly was a new way of sailing that we had little experience of. We managed to learn a lot about the local conditions and spiked our learning curve when it comes to international regattas.

Huge congratulations to South Africa on winning the event and on their level of consistency in very tough sailing area and challenging conditions! 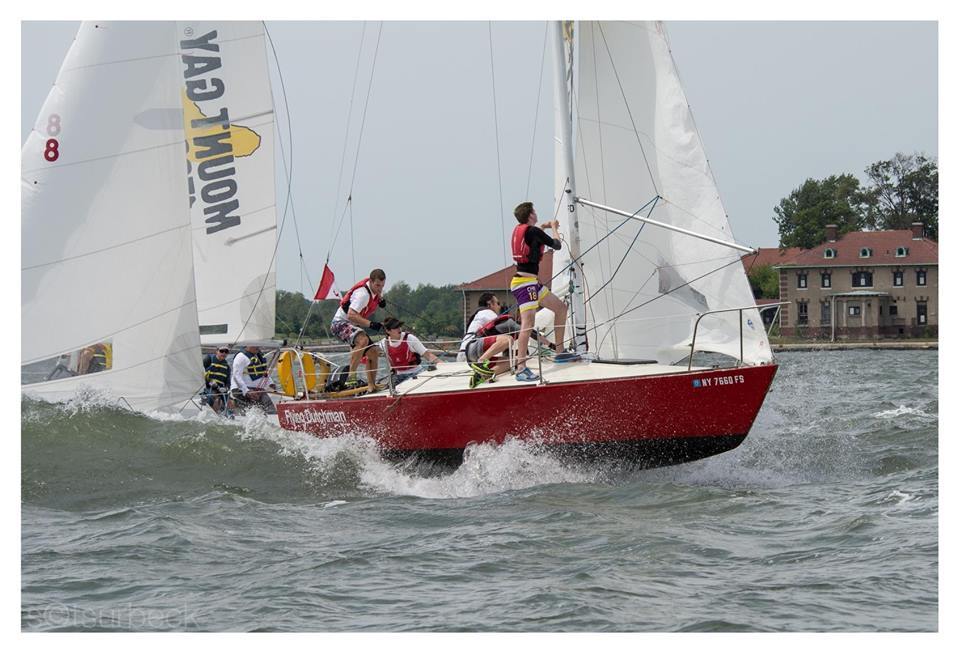 We had a great time meeting new and interesting people and enjoyed the company of our other HYC. We had a wonderful time on Saturday night when as part of the regatta we were taken on a starlit cruise taking us to the Statue of Liberty and under the Brooklyn Bridge on the clubs 157-ft sailboat “Arabella”!

New York is an amazing city and it was an excellent experience, which would not have been possible if it wasn’t for all help and support of the kind members of our yacht club and those that turned out on our fundraiser night also.

A Very Special Thanks to:

+all the members and supporters of our campaign