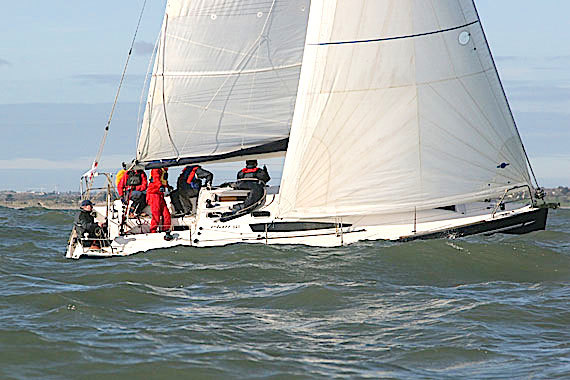 Colm Buckley’s Elan 340 'Blue Eyes' crossed the bay last Friday evening to complete in the ISORA night race from Dun Laoghaire North India and back. The weather was forecast to be very light the tides were very strong. The course on the sailing instructions was to head south to North India. The fleet would be drifting against a flooding tide for two and a half hours after the start? It had been considered that the course would be changed to head north with the tide but this was rejected by the Sailing Committee. So 15 boats came to the start line for NYC Commodore, Larry Power, to send them off towards North India.

At the time of the start there was no wind and the flooding tide pushed the fleet back away from the start line. It was approximately 30 minutes before the first boat managed to creep across the line. At this stage those boats on the land side decided to head close to the land to avoid the tide. The remainder headed out to sea into the tide but towards the line of wind that was appearing on the horizon.

In the flyky conditions the decision to lead to land oaid off the those boats caught a line of wind that shot them up to the Mug,ins. The boats that went outside sat in a hole and watched the parade of boats heading past Muglins towards North India lead by the “J Boats” “Ruth” and “Jedi” and “Blue Eyes” close behind using her new asymmetric spinnaker.

After the Muglins the wind was a steady 5-7 knots in a tight reach with boat speeds matching wind speeds. When the fleet approached North India, it was well bunched. At this stage the tide has turned and was flowing fast south at 2.5-3.0 knots.

The night sky was clear and the background of Bray, Greystones and Wicklow could be easily seen. Shooting stars were everywhere when the fleet rounded North India. After the leading boats had rounded North India, the remaining boats clustered while rounding the mark in the strong tide.

Soon after rounding of north India the leaders were heading due north against the strong tide. Unlike the start, those who headed out to sea maintained their wind while those heading under Bray Head battled with the extremely light and shifting winds.

Under and after Bray head the winds backed and veered and varied in strength from 2-20 knots!!!! It was bizarre. Those boats who were forced out, lead by “Ruth”, appeared to maintain their wind and romped home without fuss leaving the remainder of the fleet struggling against the tide. 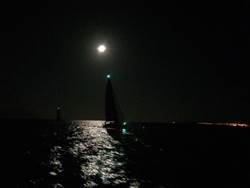 The J109 'Ruth', stormed home long before anyone else taking 1st overall and Class 1. Howth Yacht Club’s “Blue Eyes” took 2nd overall, 1st in Class 1 and 1st in Silver Class. “Ruth” finished at 03.02, “Blue Eyes” finished at 04.09 while the last boat crossed the line just before 06.00. Despite the fluky wind conditions, it was a beautiful night to go sailing.