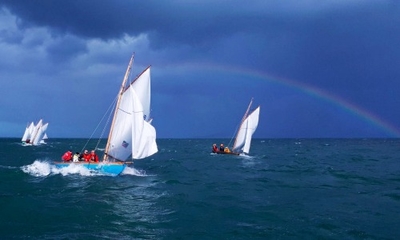 Last Saturday's mixed bag of weather kept some off the water; but fortune favours the bold, and those those who did set sail saw dramatic racing and a "Sailmakers' Special," and laid claim to well-earned Autumn League specials to end the day.

See below for class reports, and check out the photo gallery for examples of the sky's moody blues on race day. This is shaping up to be a series to remember; don't forget to book your spot for the dinner to celebrate it all on 22 October.

Dux gets her gun in Class 2

The fourth race greeted the six starters from Class 2 with a blustery, westerly breeze, which at times was hitting 20Kts +, albeit with plenty of sunshine!

Following an AP for gusting conditions, the Race Officer picked a Round the Cans course that was to test all crews. With #3s the order of the day for the start, a change to #1s for the last fetch/beat to Viceroy Mark made for exciting and wet conditions for the lucky foredeck crews.

From the start gun, both Maximus and Dux chose the favoured Committee boat end, while Xebec, No Excuse, and Viking ran down the line towards the Pin end. At the first mark, Dux had established a marginal lead over Maximus -- which she was to hold all the way to the finish, beating her rival X302 by 40 seconds.

A Port and Starboard incident half-way up the first beat between Xebec and No Excuse allowed Impetuous to slip into third slot at the weather mark, only to lose out to a determined No Excuse team around the race track.

With only two squibs racing, what promised to be an afternoon of one-on-one match racing looked like it was turning into a game of last crew standing.

Conditions were too wild for even Slipstream’s Fiona to make herself heard; a game of boat-to-boat charades helped establish that neither boat had an appetite to fly kite. At the start, Slipstream cruised down the empty line on port, pointing up at the gun to comfortably pass over the top of Cool Beans.

Cool Beans recovered quickly, rounding the windward mark first; both proceeded kite-less to the first leeward mark, with Slipstream recovering some ground. Both kept it tight rounding, but Slipstream quickly found its groove, leaving Cool Beans for dust. For the final part of this beat, the two boats separated; going right, Cool Beans regained the lead.

With conditions improving, Cool Beans prepped the spinnaker pole, looking back to see if they could coax Slipstream into flying theirs. With Slipstream now hoisting, Cool Beans continued with putting theirs up...Big mistake, Cool Beans! Slipstream proceeded to reel in Cool Beans, and was hot on its heels by the second leeward mark.

Slipstream put the foot down and had taken the lead by the last windward mark, deciding to fly kite on the final downwind leg. With lump in throat, so did Cool Beans. Slipstream went broad, Cool Beans went directly downwind and quickly decided to take its kite down. After a kite tangle during a gybe, Slipstream decided to drop it to avoid ending up with two kites. By the last leeward mark Slipstream led by two boat lengths and headed for the island. Cool Beans opted to sail on, but found itself in a lighter breeze. With Cool Beans dispatched, Slipstream cruised around the Martello Tower to the finishing line. Another win for the visitors!


Howth 17s shift with the breeze, but it's Delginis that takes it

With a wind range of 20 to 30kts, and shifting left and right from the west, the Howth 17 fleet of 10 starters were well-tested by what was an excellent course, with 3 beats and runs that included a gybe at the Island mark.

Delginis went left and then right on the break to take a lead at the weather mark; a lead she held all the way to the finish, where she was 30 seconds ahead of the Turvey brothers on Isobel. Behind them, the places chopped and changed with the shifting breeze. Oona crashed out with a broken boom, and Hera fell back with a moving spider band, so that David Nixon on Erica came right back to take 3rd. David Jones' Rosemary finished 4th on the water to win on handicap, but Rima Macken’s Eileen who stayed well up in the fleet maintained her overall lead in the HPH division by securing 2nd.

At the halfway point of the series, with one discard applied, it's Delginis -- with Isobel 3 points back -- who led the way on scratch.

After days of ‘will we or won’t we’ weather forecasts, the westerly wind on the way to the start was benign enough to hide any warning of the impending ‘Sailmaker’s Special’ conditions – initial wind speed of 20 knots, down to 8 knots a third of the way into the race, to encourage a change to bigger headsails, but quickly back up to 20knots+ with no time to change down again. Little choice after that but hard work, to keep the boat moving and somewhat upright whilst listening to the flapping of quickly depreciating sails, and thinking about the sailmakers’ current Autumn League discount offers. With the leaders taking an hour and forty-five minutes to sail the course in the very challenging conditions, bodies, sails and boats were well tested; but there was no doubt about the race being entitled to go on the list of Autumn League crackers.

With all opting for their smaller headsail in the sturdy conditions at the start -- and only one OCS boat -- by the first windward it was Yellow Peril (Murphy / Costello) in the lead; and the first boat to decide whether to fly the kite on the broad reach to Island mark, in the by-now very sturdy breeze and building sea. After a pause for consideration, up it went; and, after a further pause while the chasing Shiggi Shiggi (P&L McMahon) and Harlequin (D Clarke) waited to see if the leader stayed vertical, theirs followed suit. With a gybe needed at Island mark and a closer reach out to Osprey to follow, Yellow Peril went back to whitesails before gybing. But their pursuers took the braver choice, got through their gybes, and were looking good on the reach -- until the wind freshened and veered to make whitesails the more attractive option. The easing breeze on the next windward leg slowed progress and tempted many to change up to big headsails during the subsequent spinnaker reach. However, the breeze quickly climbed back up to the low twenties after the leeward mark, making it a struggle to go forwards rather than sideways.

The leaders kept station until the second long beat, when Yellow Peril and Shiggi Shiggi went left, Harlequin went right, and Trick Or Treat (Pearson / Blay), winner of the first three races, went even further right. By the windward mark, Trick or Treat were up to first with Harlequin rounding second, the left-siders back in the minor placings and HoneyBadger (G May) becoming a contender. A broad reach brought the fleet back to Dunbo, the last turning mark, and Trick Or Treat was looking good for a fourth win. However, choosing the layline to clear the north-west corner of Ireland’s Eye in the ebbing tide was the final hurdle of the day.  Harlequin judged their course to perfection, inspecting some lobster pot floats in the process, and passed Trick Or Treat, slowing them enough to allow Yellow Peril also squeeze past to grab second; a dramatic end to a dramatic race. On the HPH results, Weyhey (I. Dickson), Sanderling (B. Jennings) and Ghosty Ned (D. Harkin) took the podium places.

Race 4 saw strong conditions again, with the fleet bunching towards the committee boat for the start and Lee Douglas’ Shenanigans leading the fleet away. At the windward mark, it was Insider from Shenanigans from Pepsi, the heavier breeze suiting the bigger, heavier boats, and with many boats having reefs in their mainsails. The whole fleet took caution for the downwind with no spinnakers being flown. On the next upwind Insider led, but with many position changes throughout the fleet. At this stage, the wind had begun to drop -- with most of the fleet hoisting smaller, heavy-weather spinnakers.

By the third round most thought the breeze had abated, and for the final downwind leg Insider hoisted their large spinnaker; the only boat to hoist. This proved the be the wrong answer as the gusts built, culminating in Insider demonstrating a Chinese gybe and dunking the helm in the water... but they were able to recover by the leeward mark.

At the finish, Insider was 1st on the water and on IRC; with Suzanne on Silver Shamrock proving that the missing Conor for the race wasn’t an issue, as they posted another 2nd. Kilcullen showing the benefits of One Design, as they jumped straight into Scandal with their sails and posted a 3rd on IRC. On HPH, Doug Anderson’s Pepsi made it a pair of wins for Sigma 33s in Class 3 by taking their first win, followed by Kahera in 2nd and Insider in 3rd.

Overall, Insider leads on IRC and Kahera on HPH; but Pepsi, having discarded their DNF from week one, sits just one point behind, with Billy Whizz 3rd.