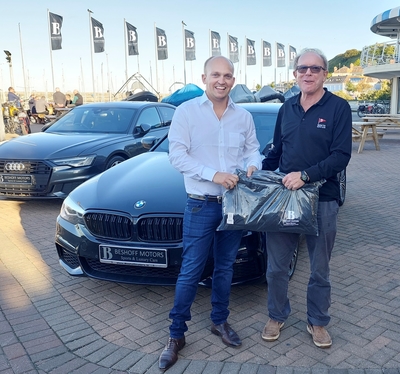 As Neil Murphy wrote of Day 2 in the Autumn League series: "The beautiful autumnal day provided everything needed for a cracking day’s racing – strong northerly, choppy sea, wall-to-wall blue sky, and warm temperature." A northerly wind and adjustments to the windward-leeward race structure were cited as issues on Day 2, but quick thinking and better weather prevailed in all classes, according to reports from our Class Captains. Read more below, and be sure to visit the gallery for more photos from the weekend! 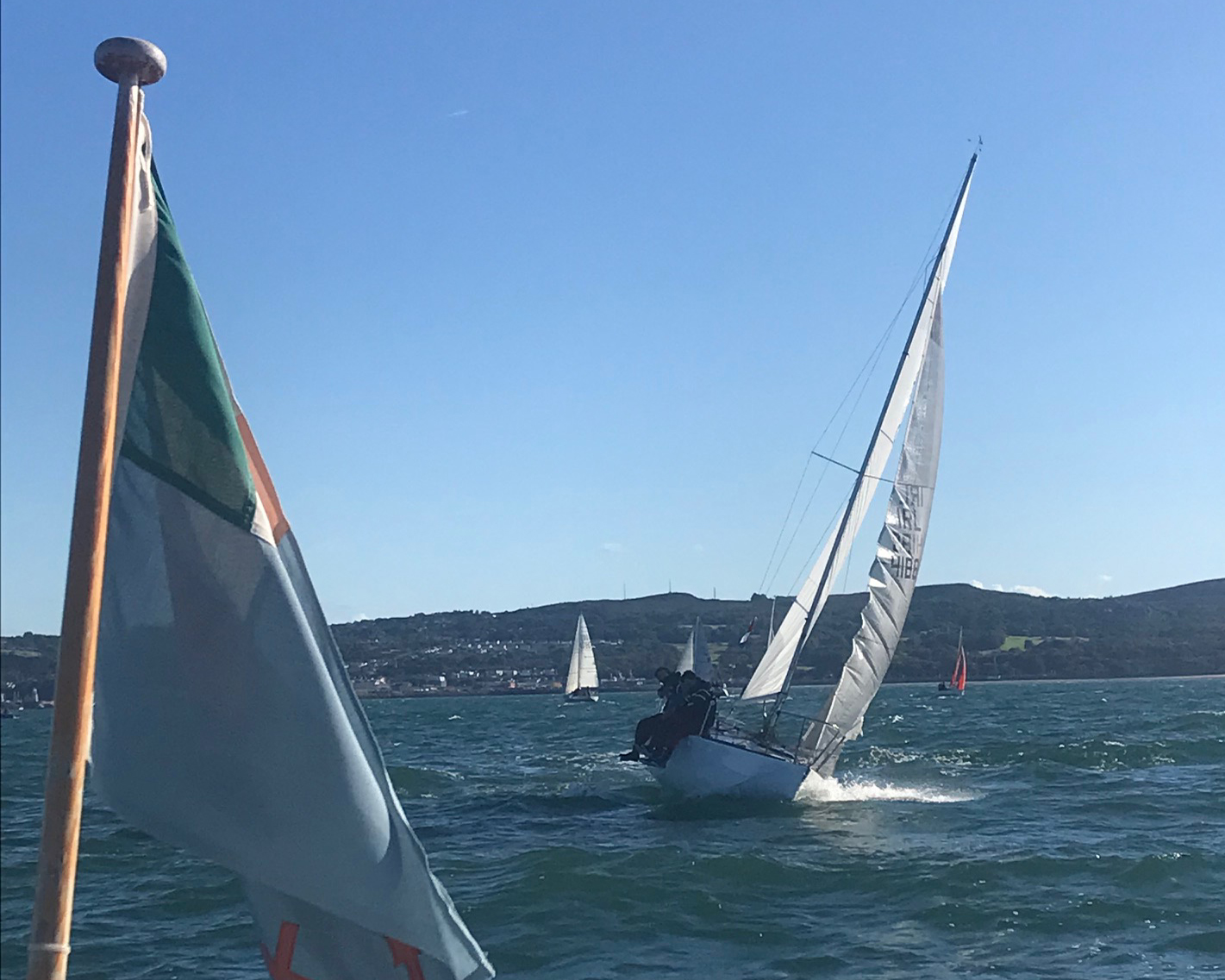 In race one, all boats got off to a clean start, with Cool Beans a bit too keen to take full advantage of a clear committee boat end, almost landing itself on its fenders in the swell. From there, Fergus, ever the gentleman, took it upon himself to direct the fleet around the course from the front in Tiger Roll. On the downwind leg, the following boats failed to see which leeward mark to round, probably due to the excitement of surfing their boats through the swell. As Slipstream, Cool Beans, Absolutely Fabulous, and Tears for Fears together approached the other fleets' leeward mark, Slipstream came to the realisation first that the yellow mark over his shoulder was the correct one, and promptly veered up to it; prompting Cool Beans to wake up and change course too. In the confusion, Tears For Fears, which had yet to drop its spinnaker, could do little to avoid Slipstream and ended up taking a penalty, resulting in them dropping to fifth.

In race two, and with the fleet finding form, a clip from Slipstream meant Tiger Roll found it impossible to recover after taking its penalty. Cool Beans once again took the committee boat end, this time opting to not try to land the boat on it.

Slipstream, Aurora, and Cool Beans were prominent early on. With regular place-changes and traffic from other classes, Slipstream pulled ahead; but the rest were close. Cool Beans took 2nd by 5 seconds from Tears for Fears. 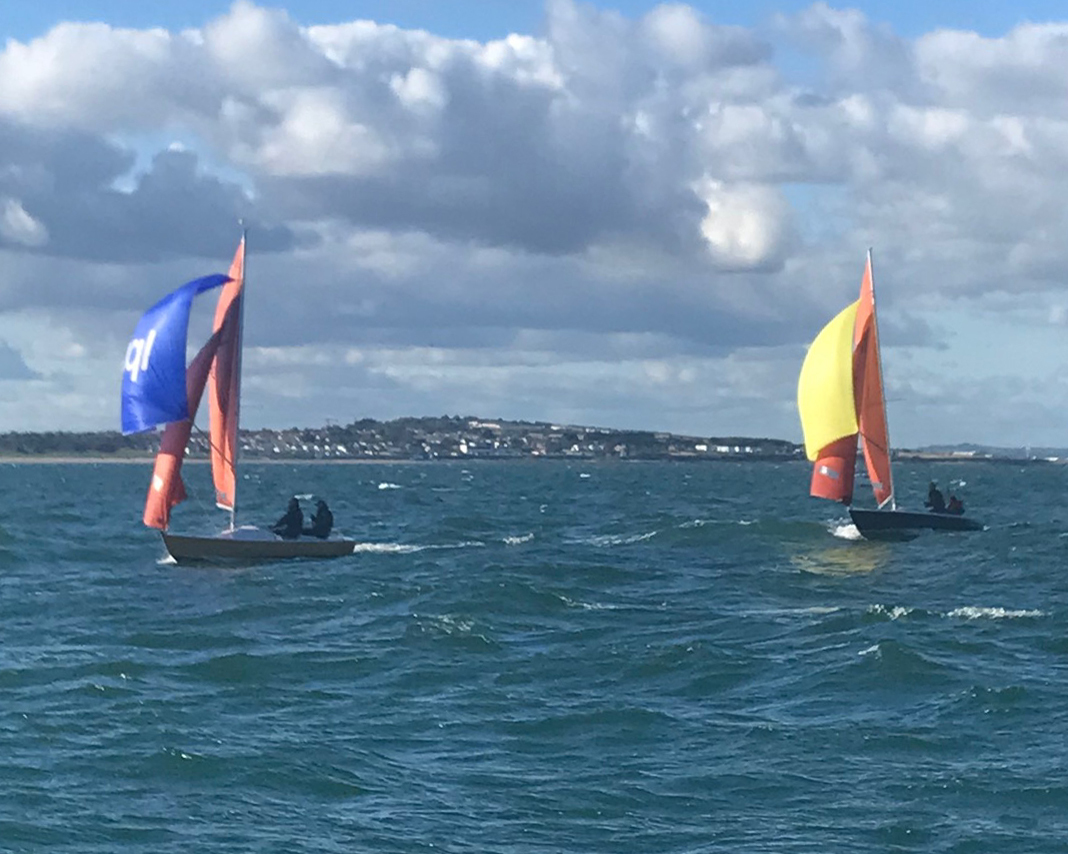 With Trick or Treat (Pearson / Blay) having done a horizon job on the fleet in the light weather of Race 1, the change in conditions for Day 2 offered their competition more hope of success. The beautiful autumnal day provided everything needed for a cracking day’s racing – strong northerly, choppy sea, wall-to-wall blue sky, and warm temperature. The 18 Kn+ breeze made it a Number 2 headsail day, and the boats revelled in the conditions; although some running repairs were needed amongst the 16-strong fleet, as the wear and tear of a long season caught up on fittings that decided their duty was done.

Race Officer Robert Orr signalled a Windward Leeward course for the first race and got the fleet away after a short postponement, while the hard-working mark-layers struggled to position their charges in the challenging conditions for RIBs. The fleet split on the first beat, with both sides being tested, before coming together at the windward mark, to find that neither side had been favoured.

The downwind leg produced lots of good surfing in the sun, and some overheated sailors debated the merits of shedding layers before tackling the second beat of the two-lap course. Trick or Treat, with guest helm Gerard O’Sullivan calling the shots this week, had got to the front again and established a lead big enough to allow them to spectate on the dog fight (no pun intended) for the minor placings between Harlequin (D Clarke), HoneyBadger (G May), and Yellow Peril (Costello / Murphy). Place-changing in the chasing group continued upwind and downwind for the rest of the race, with WeyHey (I Dickson) also getting into the mix. At the finish, Trick or Treat took the gun from Harlequin and, after 45 minutes of racing, just five seconds spanned third-placed Yellow Peril, HoneyBadger and WeyHey.

Race 2 provided more of the same in terms of course layout, conditions, close racing and winner. Trick or Treat led from the first mark to take a 25-second win; with Yellow Peril second, followed by Shiggi Shiggi (P&L McMahon), and Harlequin.

On HPH, the spoils over the two races were divided between Papagena (K&B Barker) and Blue Velvet (G. Kennedy), with a win apiece. Ghosty Ned (D Harkin) and Sanderling (B Jennings) took the minor places in the first race and, in the second one, Papagena took the runner-up spot with Mr Punch (NiBhraonain / Wilson) finishing third.

So, onwards to Day 3! And with Trick or Treat now having won all three races of the series to date, the question for the rest of the fleet is: can anyone beat the red boat, before the 2022 season ends on October 22nd? 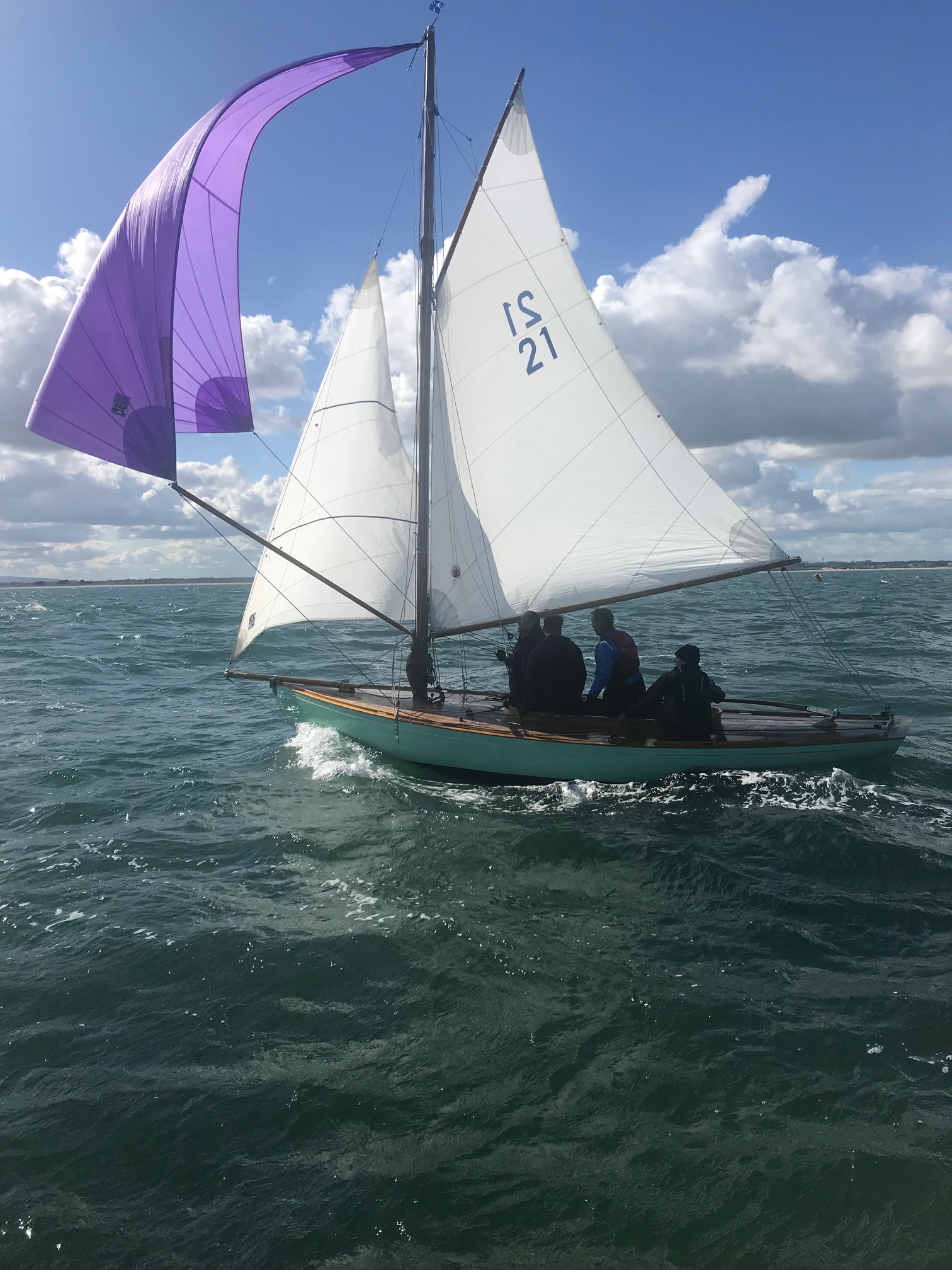 Tangles and close finishes for the Howth 17s

Being more used to ‘round the cans’ racing during their season, the Howth 17s needed to adapt strategies for their two windward-leeward races; and the short course-length would favour boats that did the least amount of manoeuvering. The in-form Erica struggled to recreate a recent run of speed, leaving long-term rivals Isobel and Deilginis to battle it out on each leg of the course; and there wasn’t the width of a tell-tale between them when they crossed the finish line in a dead heat. Leila and Oona managed third and fourth place, while Zaida won the race on handicap.

An obvious boat-end bias on the start line of the second race -- and the subsequent squeeze of boats to get the best start -- conspired against Erica and Rachel Cronin, who reacted quickly and had to bail out at the last second. It wasn’t to be Erica‘s day, and the opportunity again opened for Isobel and Deilginis. The pair raced neck-and-neck to the first leeward mark, and a bit too closely -- getting tangled and allowing Orla pass and eventually finish as winner. The handicap winner was Eileen, whose team have now won two handicap races in the series. 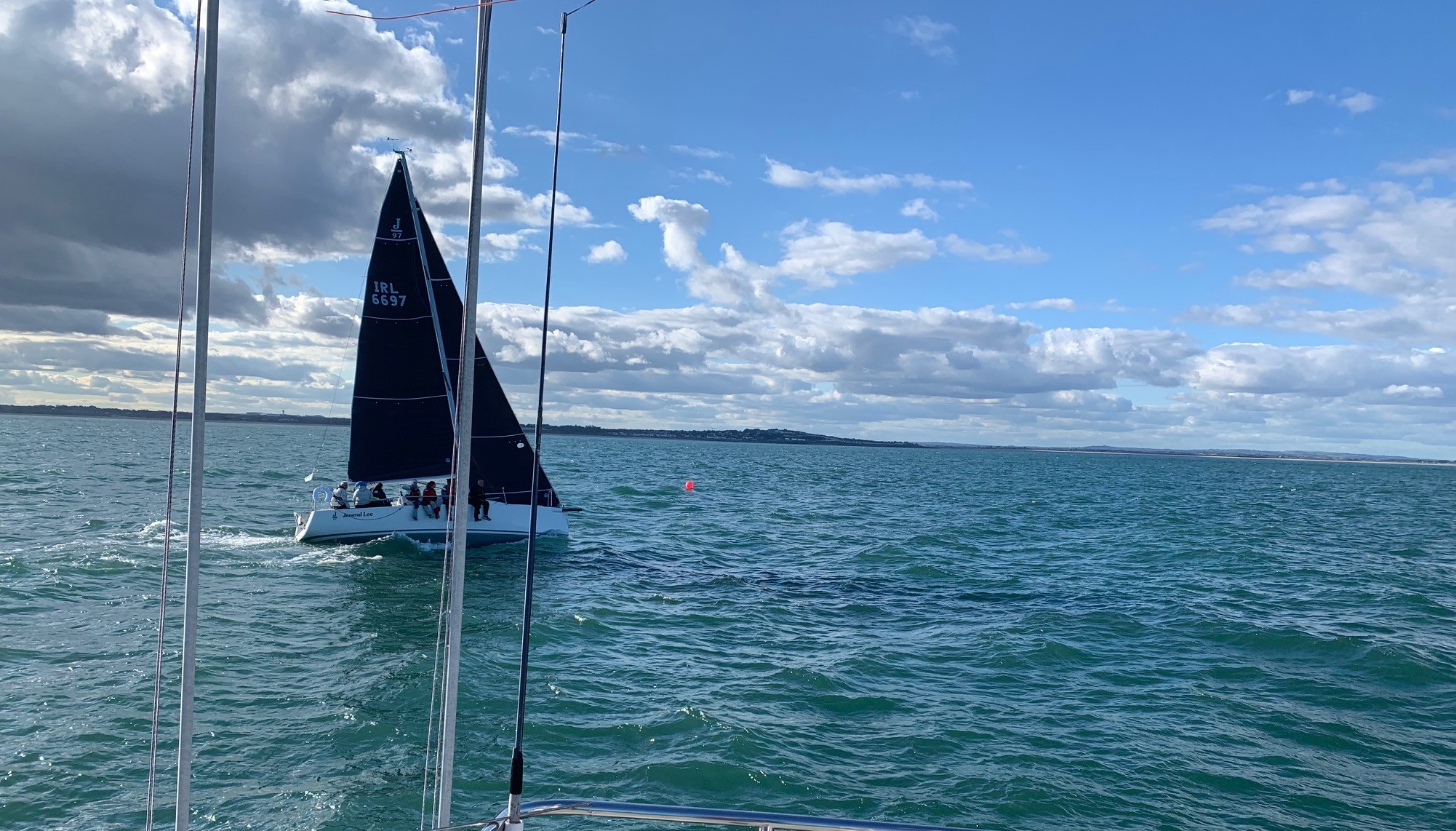 Playing the winds right was key in Class 3

Increased breeze for races 2 and 3 was always going to make things more interesting for Class 3, due to range in boat sizes. The big change for this week was the absence of Howth’s K25 Team Kilcullen, due to a structural issue with the boat (that was luckily spotted prior to sailing), but they hope to be back in the other Howth K25 Boat, Scandal, next week.

The heavier breeze suited Insider, who was first on IRC; but was again kept honest with Silver Shamrock in hot pursuit, followed by Malahide entry Kahera in 3rd. In HPH, after the disappointment of missing a mark last week, Billy Whizz of Malahide was first, ahead of Insider’s sistership Pepsi and with Kahera posting 3rd to match their IRC result.

Race 2 was a shorter race with much closer racing, with a better start from the whole fleet. Insider was first to the windward mark, followed again by Silver Shamrock, Billy Whizz, and Kahera. Some boats chose a more conservative approach downwind to avoid the gybe under spinnaker, but there were gains to be had for those who hoisted straight away in the heavier breeze. In the end, it was a repeat of the previous race on IRC with Insider, Silver Shamrock, and Kahera. In HPH, Billy Whizz beat their Malahide clubmate Kahera by 14 seconds, with Pepsi again on the podium less than a further 30 seconds back.

Overall, this leaves Insider 1st on IRC and Kahera 1st on HPH, but when Billy Whizz discards their DNF for race 1, they will be right up there on HPH. 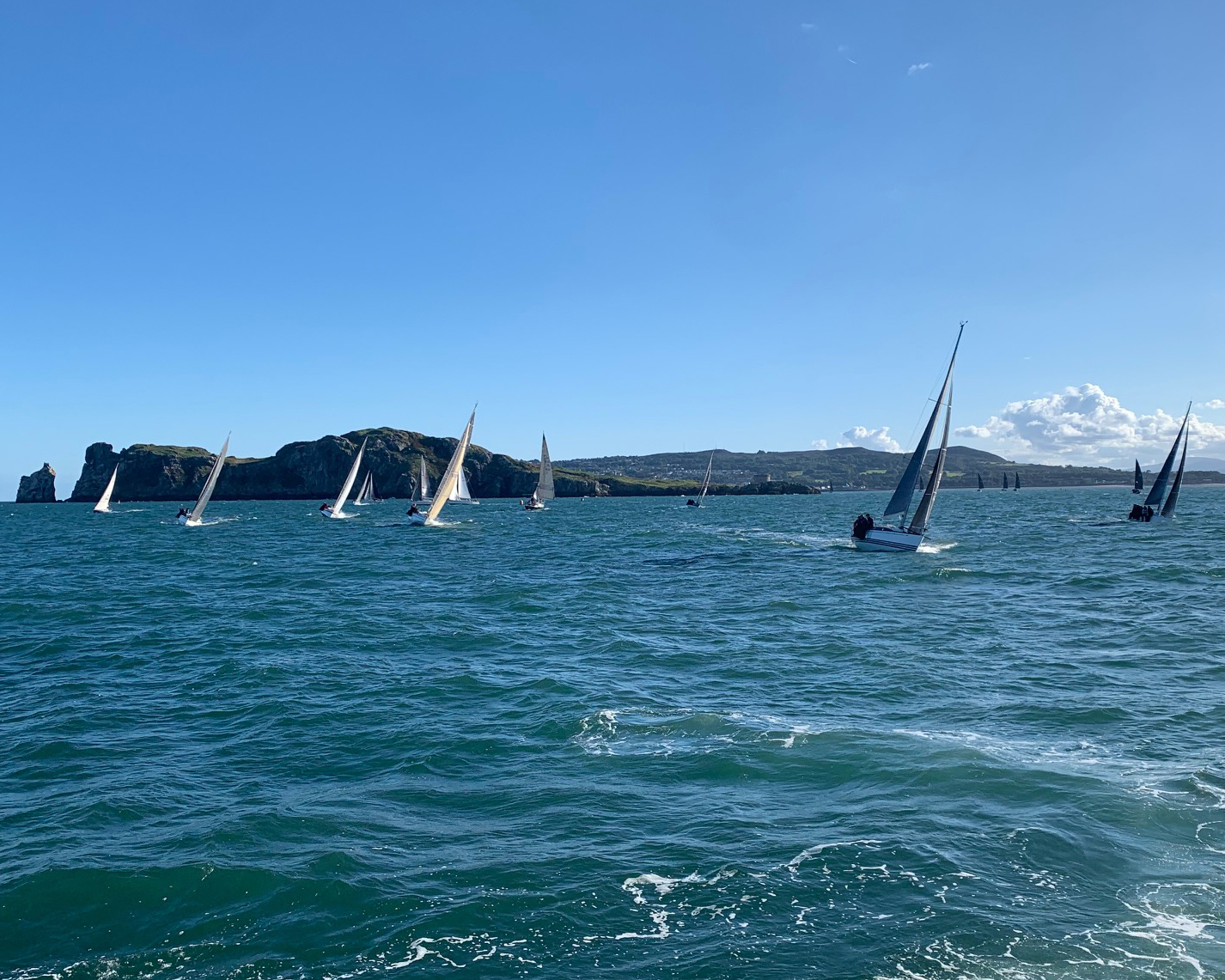 Six entries made it to the start line in a fresh northerly breeze; and, following an AP for veering wind, the Race Officer gave us two excellent windward-leeward races.

From the gun of the first race it was evident that Paddy Kyne’s X302 Maximus was on-form and going like a train. No-Excuse and Xebec were also finding the fresh conditions to their liking, but it was Dux who found the speed to secure 2nd in race 1, followed in by No-Excuse. A race win for the gladiators on Maximus in both IRC and HPH... could they pull off the double?!?

The answer was yes. Race 2 saw Maximus continue the consistency they showed in the first race and, although closely hounded by the Corby 25, Maximus took her 2nd race win of the day, followed home by Impetuous and Dux in 3rd. Once ashore, the chat was all praise for the W/L format, which gave close racing for all the Class 2 boats. With the results out by 6pm, Maximus was now leading the series on both IRC and HPH. 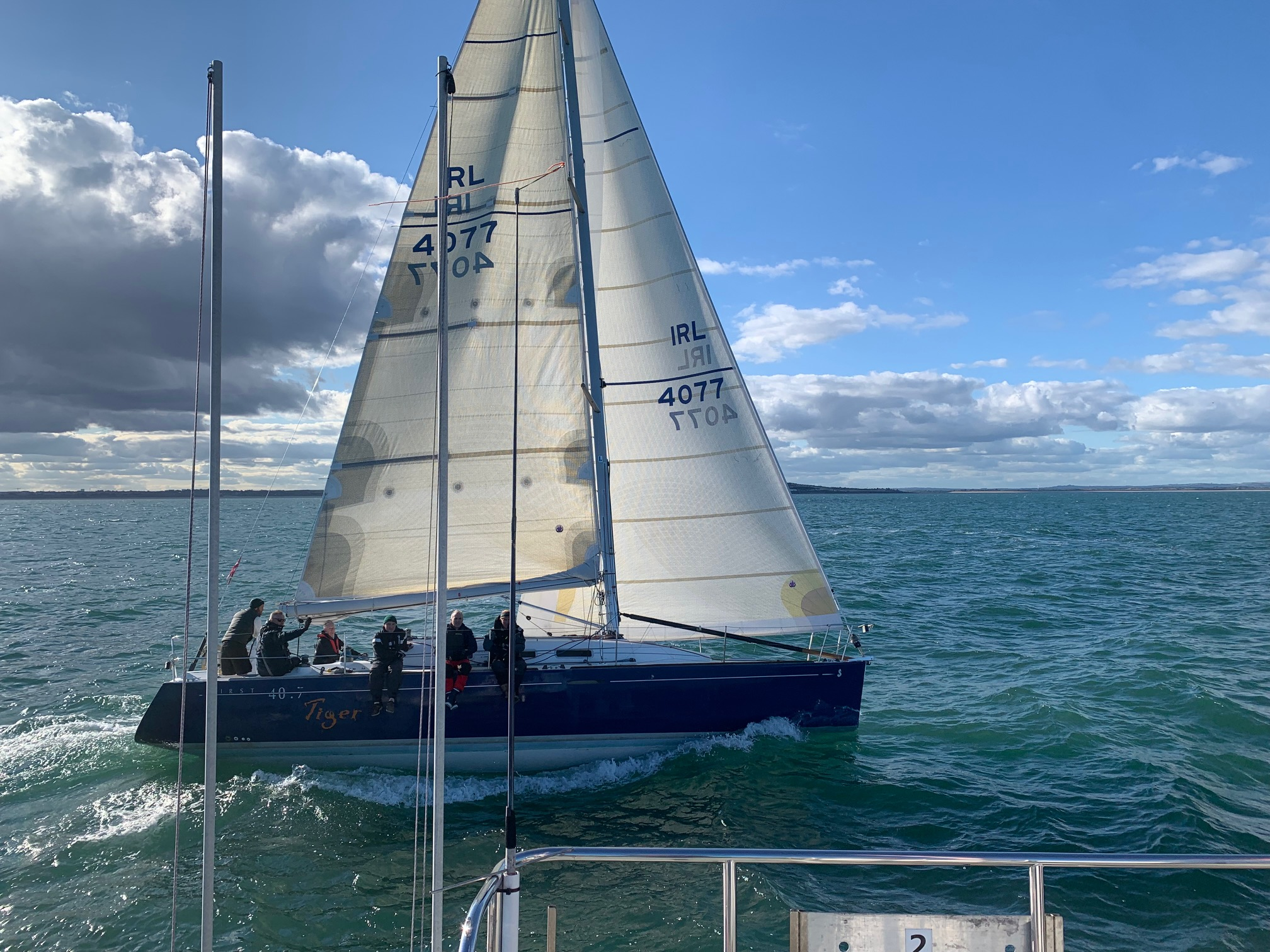 'Lumpy' conditions and a temperamental breeze in Cruisers 1

Two bullets from Snapshot -- in IRC and HPH -- on day two of the Autumn League sees the Evans’ brothers take the lead from Stephen Quinn’s Lambay Rules, who managed a respectable 3,2 on the day to leave then a point behind after three races. Conditions were lumpy due to the northerly breeze of 15 to 20 knots, and the start of the two windward-leeward races was delayed, as some of the marks went wandering. A compact course made for plenty of close boat-on-boat racing, and boat handling skills needed to be at their best. Storm was the best of the J109’s with a 2, 3 on the day.