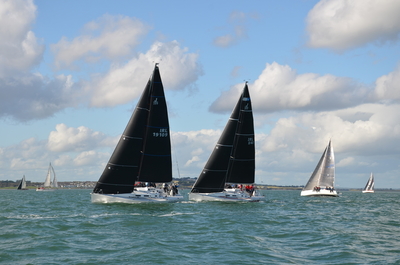 The weather was great and the enthusiasm high on Saturday, 17 September, for the first day of the Beshoff Motors Autumn League series. This year is the 40th anniversary of the programme, with eight classes of keelboats represented over six Saturdays. Please find below the reports from Week 1; you can read more about Autumn League here, find full results here, and keep following along with the series on hyc.ie and our social media channels. Stay tuned for a special report from the Taste of Autumn Racing initiative tomorrow, too...

A Photo finish for the Squibs

It was great to see Rob Marshall travel from Killyleagh YC for the Beshoff Motors Autumn League, adding to the local fleet. Racing in light shifty conditions meant concentration was key. The RO team on ‘Sea Wych’ did well to deliver a good race in tricky conditions. Right from the start positions were changing. Slipstream with Rob & Fiona looked good on the right initially. Tiger Roll (Gus & Ger), led at the 1st windward mark. After being 5th around the first windward mark, Chatterbox (Jeff & Stephen) got to work playing the shifty conditions on the next beat to rejoin the pack and later took the lead on the downwind leg.

By the last leeward mark Tiger Roll led Chatterbox by a boat length with Slipstream a further boat length behind. 50m from the finish with a following breeze, Chatterbox gained an overlap with Tiger Roll but Slipstream was on a charge, PHOTO FINISH!! The three boats crossed the line overlapped. The look on Gus’ face told you he was on the bottom rung of the podium. With Jeff and Rob still wondering who had won, Tears for Fears (Niall & Cormac) was crossing the line in 4th. One Design racing at its best, blink and you miss it. For the record victory went to Chatterbox with Slipstream 2nd.

While the dust was settling on the race track, it was also settling on Derek Bothwell’s driveway with completion of the 1st transfer of the 2023 season….

Puppeteers take it down to the wire

The Puppeteer 22 fleet was in celebratory mood for the first Autumn League race as it headed north to the Inshore start line off Portmarnock beach. With 19 entries for the series, two more than competed for the National Championships last weekend, it had retained its title as the biggest Class of the Autumn League.
The light breeze brought back memories of the Championships, but the Pups were encouraged to see the first Class away, Class 3, start without any problems. With the Pups next to go, the majority quickly worked out, with the wind having veered by maybe 15 degrees over 10 minutes, that the Committee Vessel was significantly favoured as the end of the line to start at. With less than two minutes to go and no sign of the wind going left again, Race Officer Harry Gallagher displayed his AP and set his mark-layer to move the pin-end mark forward.

After a clean start, Harlequin (David Clarke) again displayed the impressive boat speed that saw them take second in the Nationals and they rounded the first mark with a comfortable lead that they extended over the next two reaching legs. West mark was the start of the fleet’s second windward leg and fourth placed Trick or Treat (A. Pearson / A. Blay) immediately tacked onto starboard to sail parallel to Portmarnock beach while the rest of the leading group headed east for a while to take their chances on what appeared to be a slightly stronger breeze further out to sea. With the wind tending to go right and the tide expected to imminently turn to the ebb flow nearer the beach, there were arguments to favour both choices but, by the time the fleet regathered at Portmarnock mark, there was no doubt about who had made the correct one and Trick or Treat had gained an enormous lead that they increased as the race progressed. With the margin between the top three boats in most Pup races counted in seconds, Trick or Treat’s gap of four and a half minutes over runner-up Harlequin confirmed the size of the lead that they had established while Shiggi Shiggi (P & L McMahon) took third place, reversing the 1-2 from the Nationals.

In the HPH results, Oddyssey (P & R Byrne) won with Trick or Treat second and No Strings (Terry Harvey) third.

Slow and Steady for the Howth 17s

The first Race of the 2022 Autumn series saw 12 Howth 17’s on the start line – A slow but steady beat to the Z mark with a reach to Portmarnock and a run to the west, with a repeat leg it was then a reach to the spit and a run to finish. No18 Erica (Davie Nixon) and No 9 (Michael Duffy) battled up to the finish with Erica claiming the spoils, No 11 Deilginis (Keith Kenny) claiming the third position on the podium. 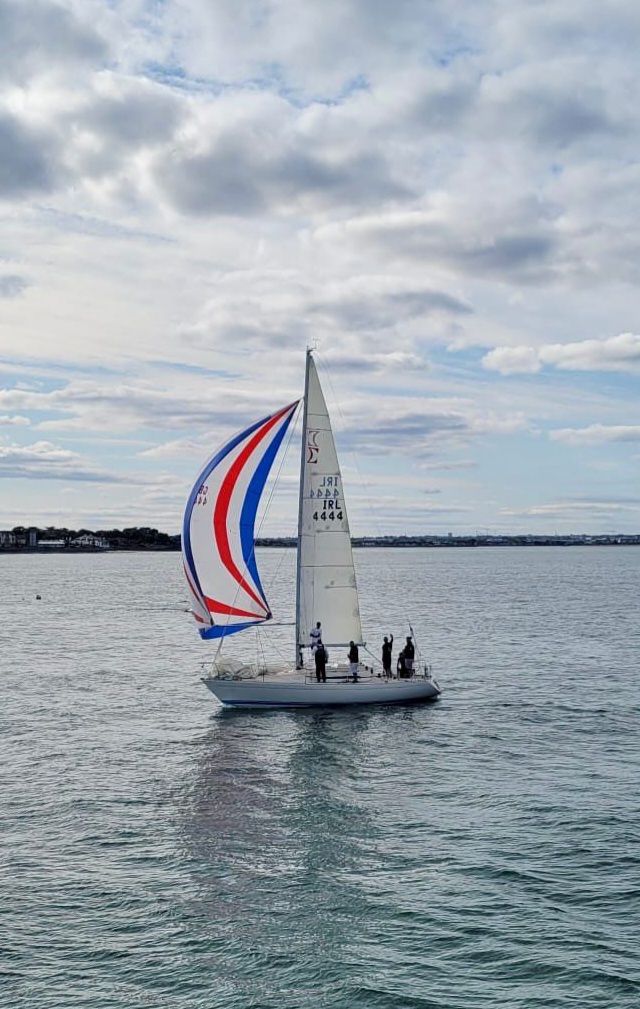 Insider takes the lead for Class 3

With 11 boats entered in Class 3, 10 made it to the start line for race 1. After a shifty first beat that included several lead changes on the water, Insider (Stephen Mullaney) rounded first from Malahide Yacht Club’s J24, Billy Whizz (Sean Anglim) and Howth’s K25 J24 team Kilcullen.

Joining Class 3 for the first time this year was Silver Shamrock (Conor Fogerty) and despite getting a bit too close to the windward mark and having to complete a penalty, he worked his way back through the fleet to finish 2nd on the water and on IRC behind Insider. Kahera (Russell Camier) from Malahide finished 3rd on IRC and took the honours in HPH.

All seven entries made it to the start line in a light Northerly breeze with plenty of sunshine and good humour evident within the fleet. With a minute to go, No Excuse, Maximus and Viking were vying for pole position at the Committee Boat end, while Xebec and Impetuous favoured the pin end of the line, Dux and Pepperbox went central. At the weather mark, Impetuous led Xebec followed in close attendance by Dux.


With Spinnakers up, the fleet close-reached into the Hub mark for a gybe, and then onto the Stack mark. Positions stayed the same as the weather mark before the long beat to Apex. It was turning out to be “Corby weather” as the Corby 25 Impetuous had made a five minute lead over the chasing pack by the Apex mark. On the run home to the finish off the Rowan, Xebec and Dux chased down the Corby with Dux overtaking Xebec. On approaching the finishing line, the crew on Impetuous where anxiously looking ahead for the Committee boat only to spot the Free Enterprise motoring on full throttle from north of Ireland's Eye to set up position at the Rowan Cardinal. They made it and Impetuous got her Gun!