Pups get windy conditions to play off the lead - eventually 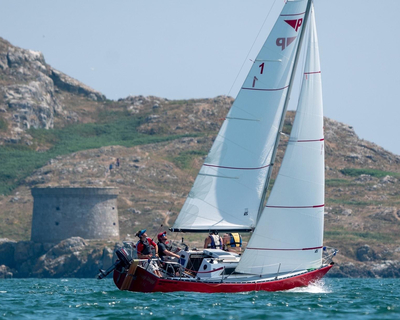 The 17-boat entry for the Puppeteer 22 Nationals, sponsored by Sutton Cross Pharmacy, at Howth YC enjoyed hugely contrasting conditions between Saturday and Sunday before Shiggi Shiggi came through to win their 3rd consecutive title.

With the forecasts for Sept 10/11 indicating no wind on Saturday and a storm on Sunday, the Puppeteer fleet had low expectations for any racing as they motored towards the race area off Portmarnock on Saturday morning.  The bright sunshine gave plenty of opportunity to admire the leftover sea that two weeks of strong easterlies had left behind but the conditions offered little hope of anything but a suntan.

By the scheduled time of the first gun, Race Officer Harry Gallagher was offering the fleet the hope of some wind after a short postponement and his fortune telling skills were proved correct when a light breeze arrived, again from the east.  The spring tides of the weekend added a further complication to Harry’s task and he decided on a triangle / sausage layout for the initial races to minimise the impact of the current.  Although each day of the event had 3 races scheduled, the forecast for Sunday made it imperative to get in as many as possible on Saturday in the expectation of a lie-on in bed being the only option for the second day. 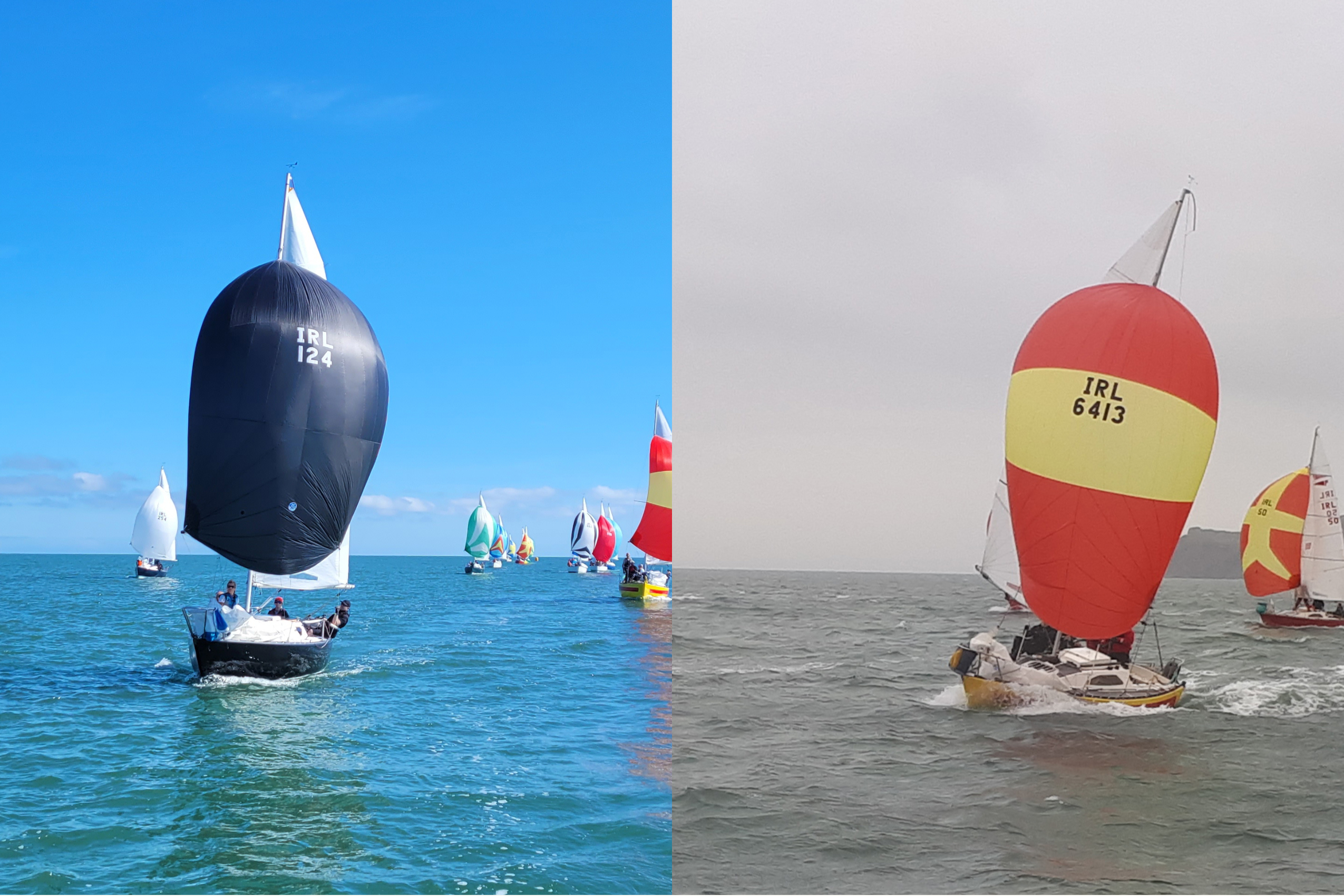 With Shiggi Shiggi (P and L McMahon) having won in both 2020 and 2021, their win in Race 1 left no doubt about their intent for 2022, even though they just pipped Harlequin (David Clarke) on the line, David being back on top form after his two-year break.  The sea conditions and light breeze placed a premium on speed, shift spotting and keeping the boat moving through the lump and the two leaders’ one minute gap over the third placed Trick or Treat (A Pearson / A Blay) showed that they had the attributes needed.

In Race 2 the leaders swapped places and it was beginning to look ominous for the other title contenders although Gold Dust, borrowed for the event by former Class stalwart Rob Stanley, grabbed third place to show that he has lost none of the skills that kept him at the front of the Howth fleet for many years in his former boat Mojo.

Race 3 saw the deck chairs shuffled as Trick or Treat took the gun from HoneyBadger (Garret May) while Shiggi Shiggi had to make do with a third and Harlequin struggled to 8th after losing a halyard up the mast just before the start. 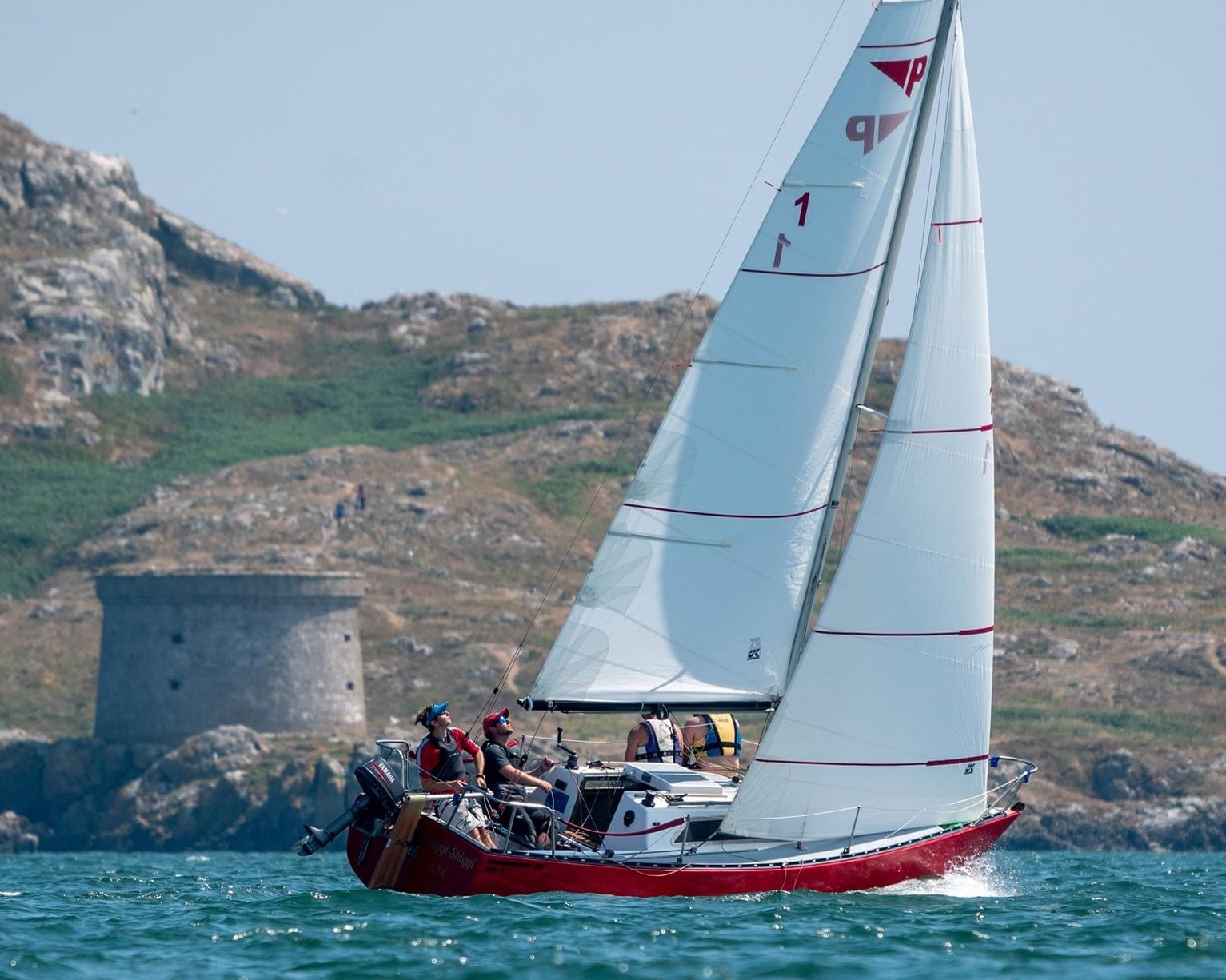 With the original race quota complete, the Race Officer decided to press on with racing and for Race 4 the wind had freshened to around 7 knots, enough to allow the fleet race a Windward Leeward course.  The extra breeze and the knowledge that this might be the last race of the event saw the over-anxious fleet went hit the line early and on the restart, under a U flag, both  HoneyBadger  and Gold Dust earned themselves UFD scores.  A close race ensued with the runs being where the main action took place and the leading four boats swapping places repeatedly.  Yellow Peril (N Murphy / C. Costello) recovered their earlier lead on the last beat to grab first place on the line by just 60cm from  Shiggi Shiggi  with Trick or Treat and Harlequin following.  As the fleet headed ashore with d  ifferent race winners for each of the four races, the overnight leaders were  Shiggi Shiggi  with Harlequin and Trick or Treat joint second and Yellow Peril in 4 th, just four points separating the top four.

Sunday brought the change in weather that the forecasts had flagged and, although the rain arrived early, the wind strength was still manageable enough to encourage the RO to try at least one race.  The gusting south easterly and pouring rain made Saturday’s Mediterranean conditions a fading memory.  The fleet showed its intent to get full value from the change in conditions (or get ashore early) with another general recall.  The U flag restart resulted in bad news for some, with overnight leader Shiggi Shiggi and repeat offenders from Race 4, HoneyBadger and Gold Dust, being sent to the naughty step.  Shiggi Shiggi was left to spectate on the race in the knowledge that it could well be the last one sailed and,in that case, a win for Harlequin would see Dave Clarke regaining the title that he last won in 2016.  Things were looking grim for the overnight leader as Harlequin led the fleet around the first leeward mark but Yellow Peril rescued her day by taking the lead on the second beat and then extending to a comfortable victory with Harlequin back to second and Trick or Treat and WeyHey (Ian Dickson) following. 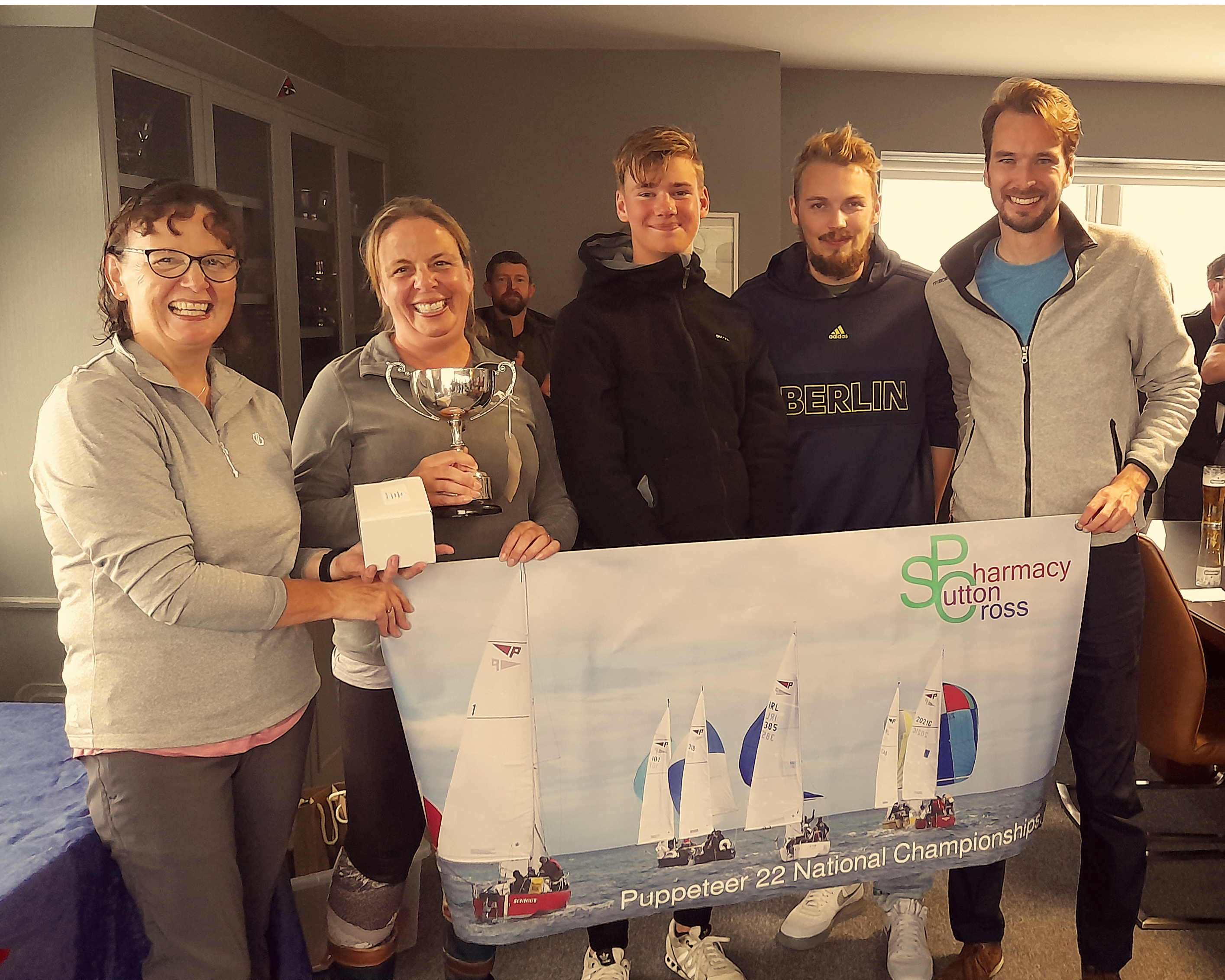 With the Committee Vessel seeing gusts of 30 knots and the rain coming down in torrents, the Race Officer displayed N over A and that was that for another National Championships.  Shiggi Shiggi took the title by one point from Harlequin and, a further point behind, Yellow Peril took third place from Trick or Treat on a tie break – possibly the tightest result in Pup history with the two point gap separating the first four places.  In the handicap event, Snowgoose (Sarah Robertson) took first ahead of Odyssey (P & R Byrne) and WeyHey.

Class Captain Mary McDyer hosted a very enjoyable prize giving in the Clubhouse amidst the bedlam of a 150 boat Optimist regional championship that was sharing the HYC facilities for the weekend.  The 17 boat entry is the biggest fleet since 2019, the last year before a ‘significant intervention’ to going racing – and life in general - got underway and the Class now looks forward to an even bigger turnout for the Beshoff Motors Autumn League, which commences on Sept 17th. 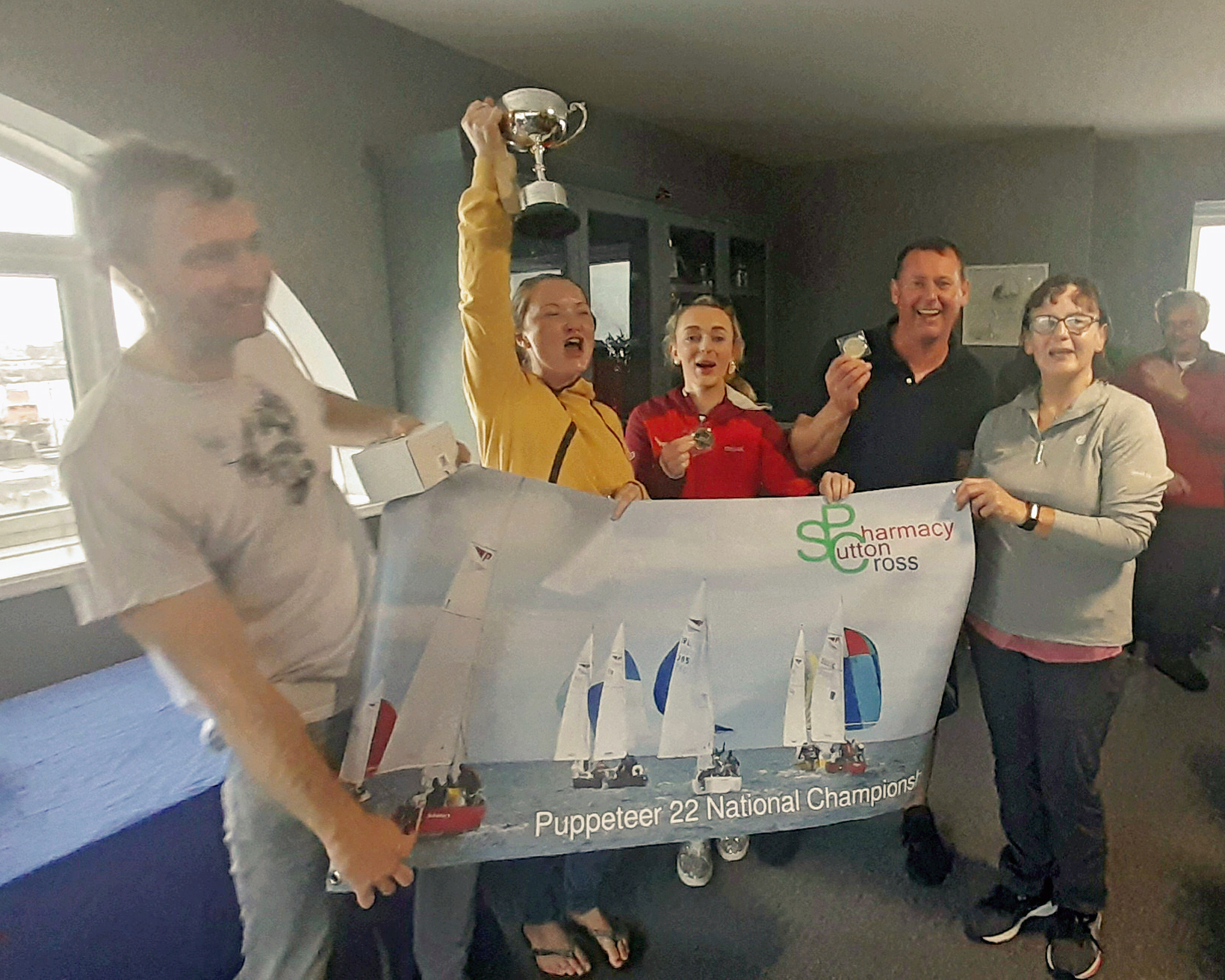