HYC's 'Headcase' comes out ahead in the J24 Easterns 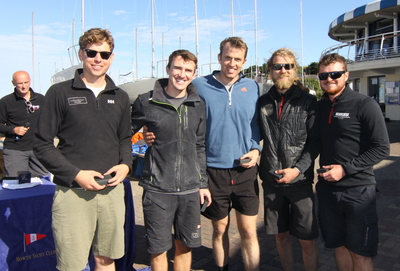 Day one of the J24 Eastern Championships, held in Howth Yacht Club saw a fierce breeze blow in from the Southwest and 21 boats take to the waters. The day began with a steady 20kts, with gusts of up to 30kts, providing exciting conditions for all sailors involved. Race number one, won by Cillian Dickson’s ‘Headcase,’ saw lots of plaining and thrilling downwind legs. Race number two, also won by ‘Headcase,’ provided even more challenging conditions and plenty of gear failure. Broken rudder, broken mast, lost engine and a few ripped sails allowed for an expensive day out on the water!  The vangs got plenty of action as the sailors saved themselves from broaching, although not all were so lucky to escape unscathed. The big winds and unpredictable waves caused many boats to retire to the bar early and there was plenty of repairs to be done when the fleet came in. A thrilling first day of racing was topped off with a fantastic dinner and great live music hosted by HYC.

Day two began quite contrarily to day one with benign conditions from the west. The AP went up as the wind kept veering right and eventually race number three kicked off with very little wind. Role tacks were an essential element of the morning as the wind was patchy and constantly shifting on the first leg of the race. A huge shift right meant the second leg of the race was equally a beat with crews quickly swapping their spinnakers for their Genoa in hopes of keeping the moment going. David Hale’s ‘Cacoon’ from Poole Yacht Club took the win as they crossed the finish line at the ‘downwind’ gate.

More AP and an engine stint up to the committee boat later saw race four start with a steady 10 gusting 12kts from the South-east giving us the champagne sailing conditions we all awaited. The left side of the course provided superb wind, allowing the Kinsale u25s team ‘Kinsailor’ to claim the victory, which is particularly impressive considering they had lost their mast the previous day.

Finally, HYC’s own Headcase took the lead in race five allowing them to claim the overall prize of the weekend. The race committee, lead by Derek Bothwell provided superb racing throughout the weekend in somewhat challenging conditions, making for a very enjoyable weekend of J24ing.

With a fleet of 20 boats and crews drawn from 15 different clubs, including Seattle to the far west and Poole to the nearer southeast, the Irish J/24 Easterns over the weekend at Howth set the ball rolling towards the J/24 Europeans at the same venue in a week's time, with the first championship race scheduled for August 30th.

The all-Ireland resourced Headcase, whose crew of Cillian Dickson, Sam O'Byrne, Louis Mulloy, Marcus Ryan and Ryan Glynn count Howth, Lough Ree, Mayo and Ballyholme among their home places, maintained the steady progress already seen through the summer at several international majors, and came out first on 1,1, (8), 2,1. Next in line were the Kinsale team led by Michael Carroll with Kinsailor with a scoreline which included a first and two seconds to leave them on 9 points to Headcase's 5. Tadgh O'Loingsigh from Tralee Bay was third in Janx Spirit with the first of the overseas challengers, Dave Hale from Poole, fourth with Cacoon.