The ROMEOs Into the West 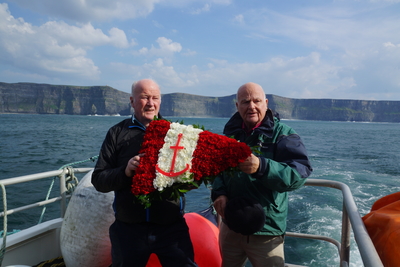 The ROMEOs were back in action again after a long shut down. This was no ordinary trip. It was the first time a ROMEOs outing included an overnight, it was the longest ROMEOs trip ever (34.5 hours Howth to Howth), and it was the furthest west the ROMEOs have ventured. 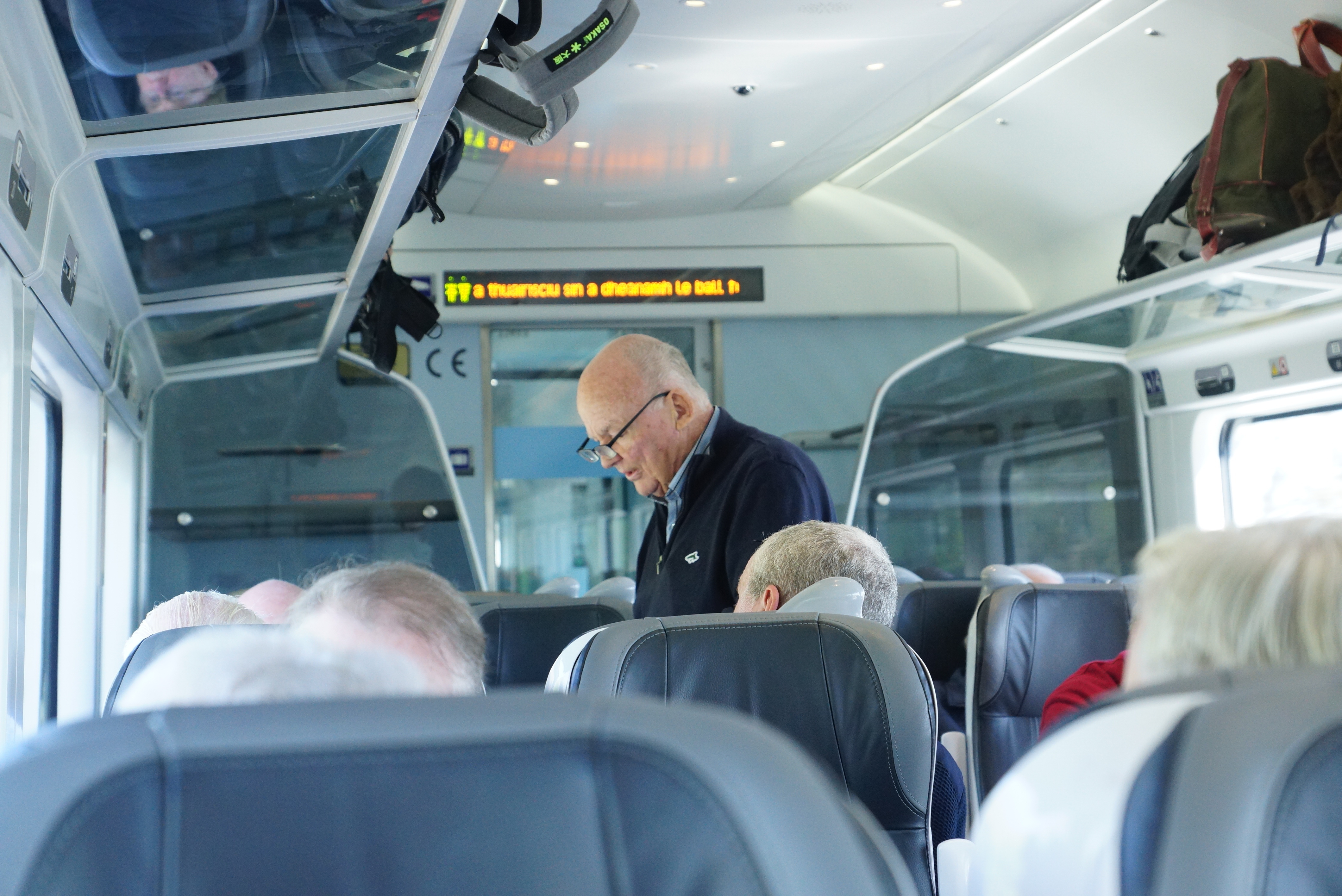 The gathering of 31 ROMEOs congregated in Heuston Station, and boarded the 13.25 train to Galway. Thanks to Irish Rail and Michael Murphy, seats were booked and the adventure continued. The train arrived in Galway in true Irish Rail form …on time. Cyril (the scout) took up point position and led the way from Ceannt Station to the pre-booked Jurys Inn Galway Hotel, a 10 minute walk for some. Others enjoyed a more leisurely ramble and admired the local scenery.

After the usual scenario of checking in and room inspection, the plans for refreshments and Eating Out were already in hand. An early bird dinner with near-by beverage bar had been booked in the Park House Hotel; a mere 10 minute walk away. The Park Hotel had been contacted in advance and was ready for the influx of thirsty and hungry ROMEOs. A private room had been set up, and the bar was ready for action.

The Park Hotel Staff made us so welcome we did not want to leave after a fantastic meal. The staff were very welcoming, professional, and looked after all our needs. After the dinner, the temptation to stay for after-dinner drinks was real, but the chief ROMEO lead the way back to Jurys as there was an early start the following day. 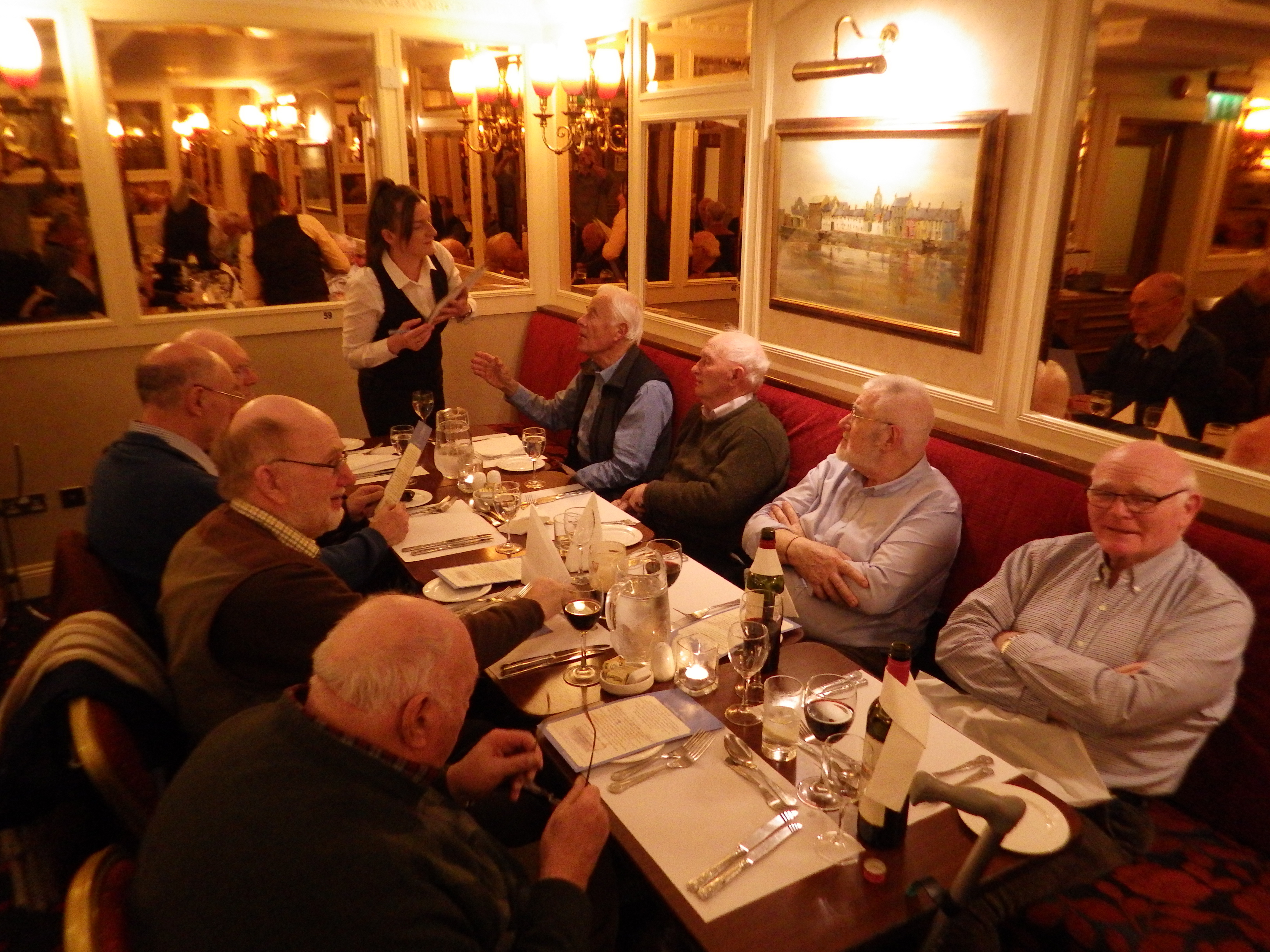 Next morning, all 31 were up early and sprightly chomping to get on board the SAOIRSE NA FARRAIGE. The new passenger ferry was due to leave Galway Docks for Kilronan, the capital of Inishmore. The ferry left at 09.30 sharp. The Captain, Peter O’Brien, was on hand to greet the ROMEO group. By chance one of the ROMEOs, Paddy Madigan, is married to the captain’s sister. It helps to know people in high places. 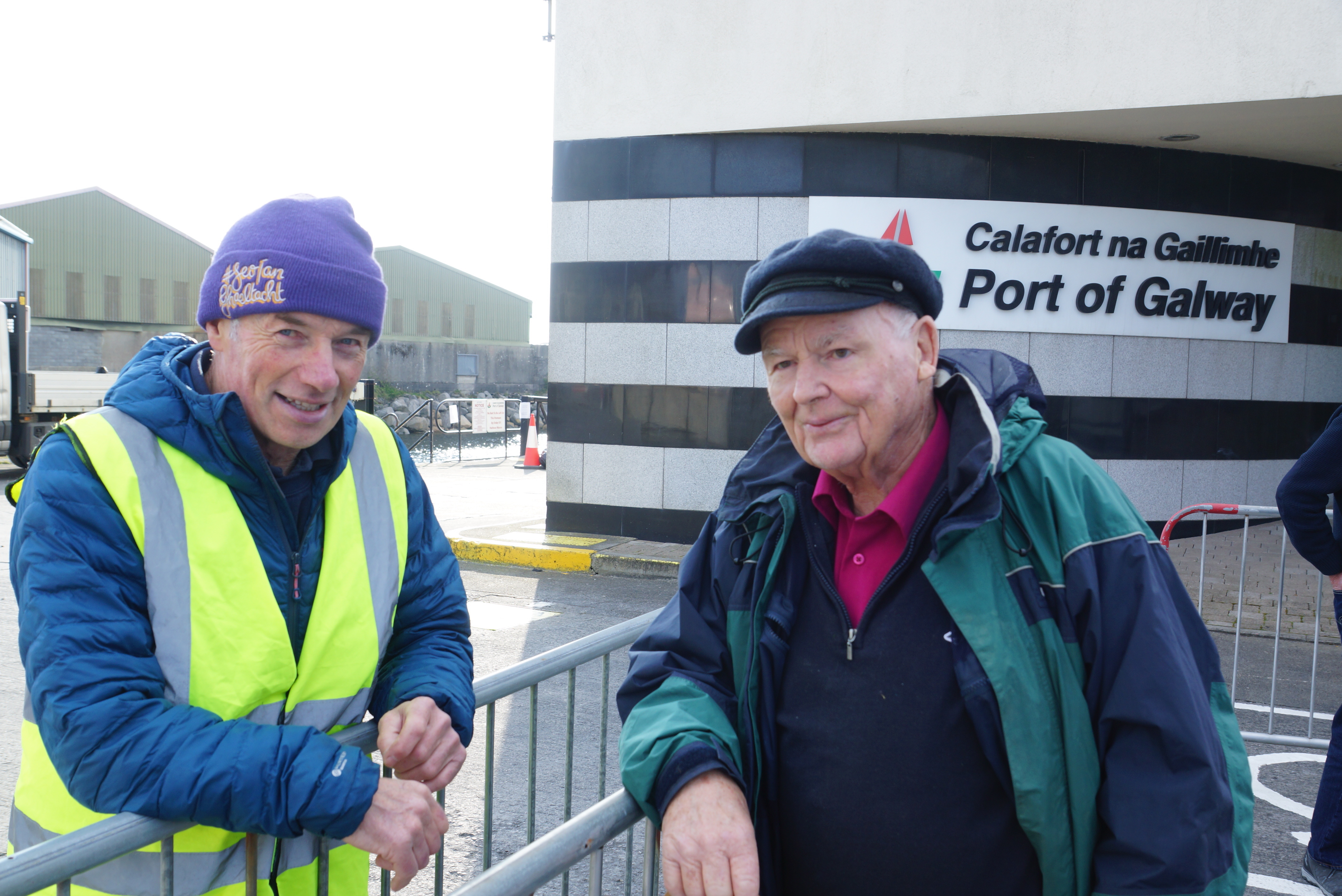 What a journey! Sunshine, flat sea, and a very welcoming crew who invited all the ROMEOs to the wheel house on this magnificent new ferry. Paddy Judge, our Commodore, felt at home in the spectacular control room on the bridge, he was allowed to look – but not touch – the controls.

The Saoirse Na Farraige was built for the Aran Islands Ferry Company, run by the O’Brien family of An Ceathru Rua, Co Galway. The vessel was built in Hong Kong, and was delivered to Galway in November 2020. She made her maiden voyage on 4th June 2021. 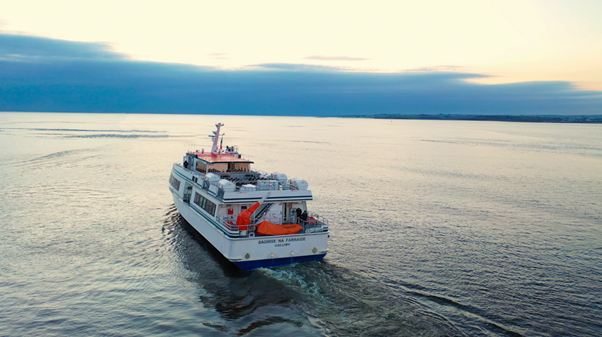 Saoirse Na Farraige sails from Galway Docks directly to Kilronan on Inishmor,e and returns from Inishmore via a route passing the Cliffs of Moher. There was a moderate breeze from the east and the crossing to Kilronan was a pleasure. 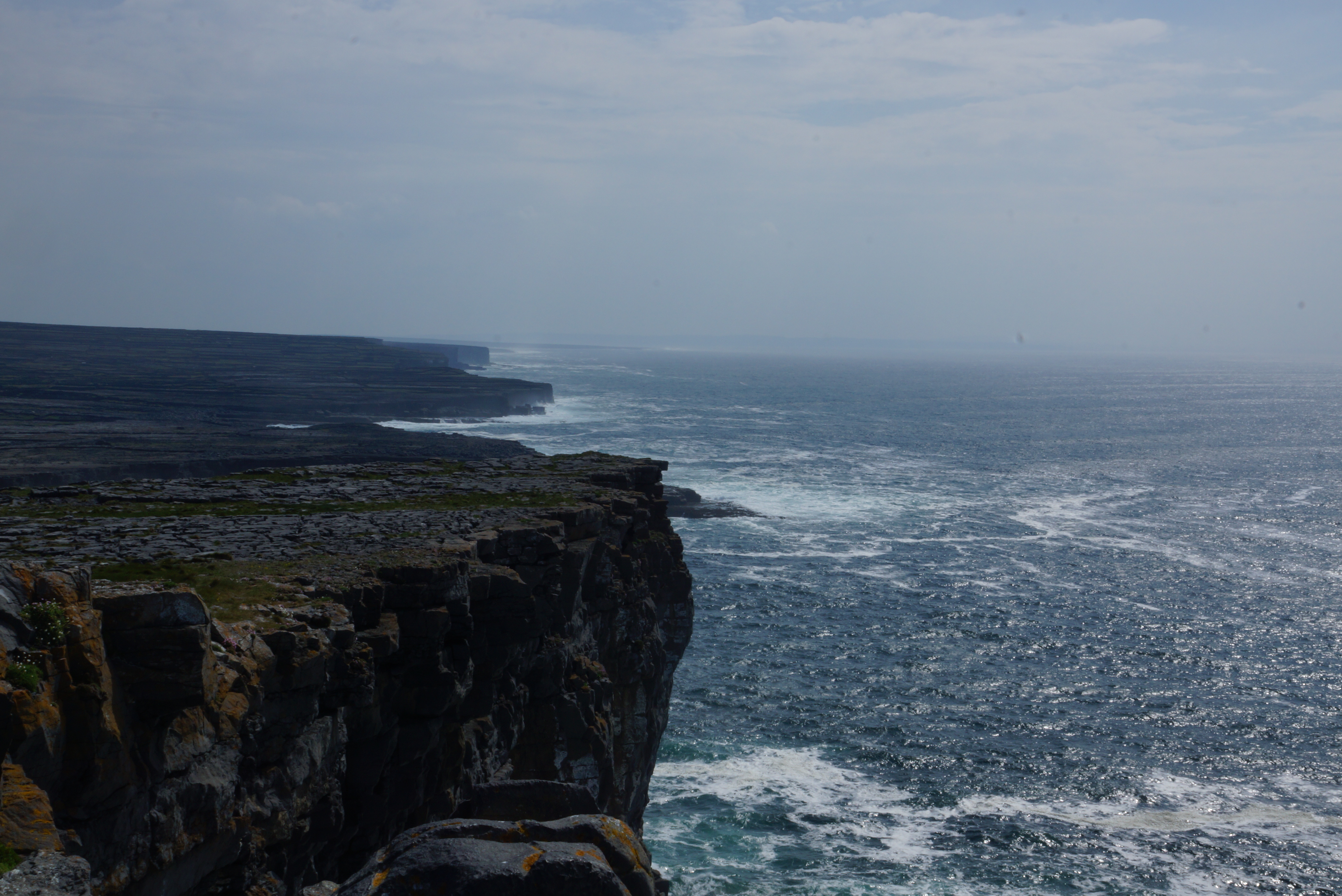 On arrival in Kilronan, transport had been arranged and a motorcade of a minibus and luxury people-carrier was waiting at the pier. Gabriel Flaherty was the lead driver, and we were treated to an eye-opening guided drive to Kilmurvey, the village close to Dun Aonghusa. At this point, there was a negotiated break in the itinerary; some decided to proceed to the Dun Aonghusa fort while others decided to explore the flora, fauna and delights of the local village. 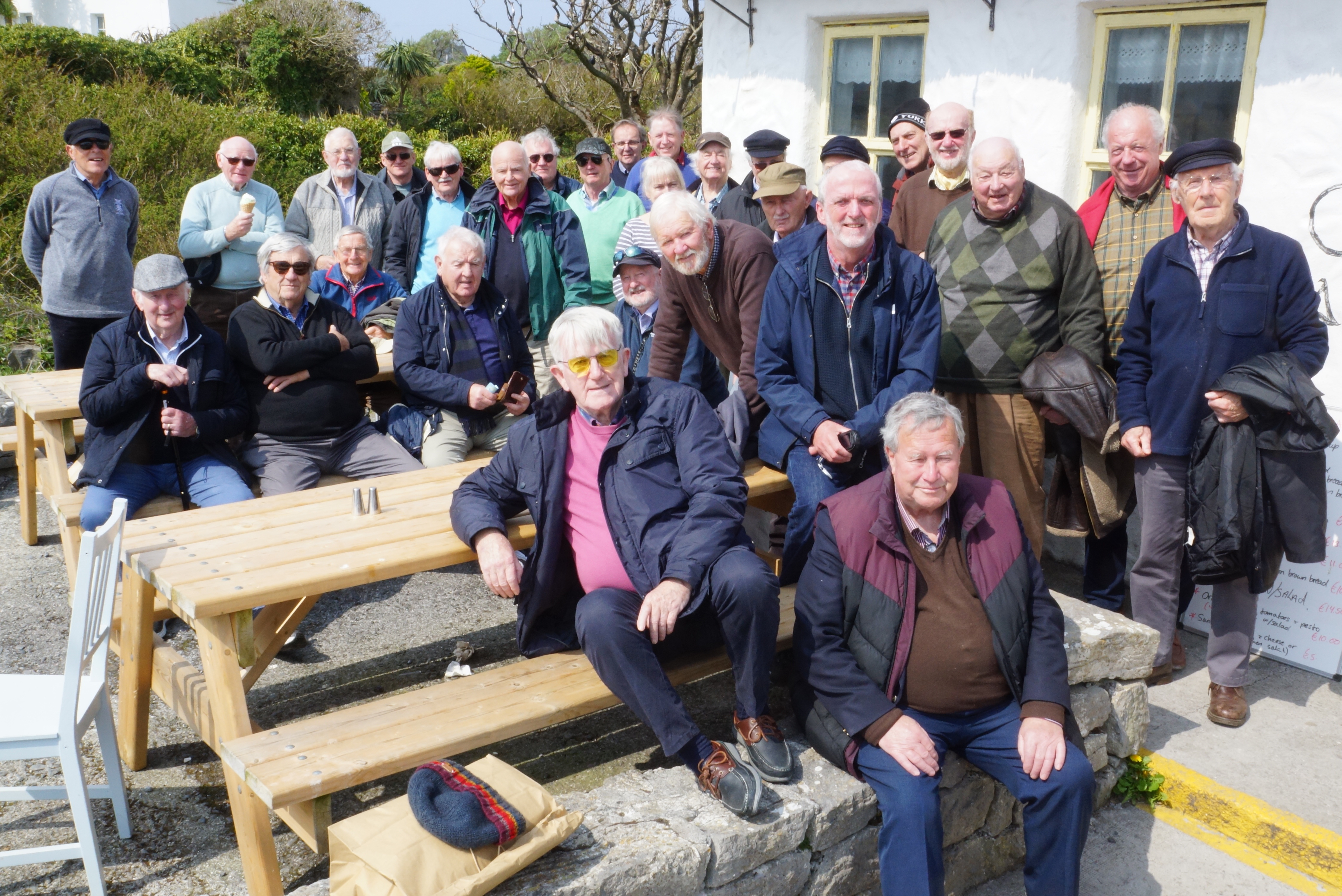 Dun Aongus is over 3000 years old and is one of Western Europe’s most magnificent stone forts. It is in the care of OPW. The walk from Kilmurvey to the interpretive centre and on to the Dun Aongus fort is well worth the effort; the views from the fort are spectacular.

Sadly, the time to depart from Kilmurvey came, as we wanted to see more of the Island before the ferry departed. Gabriel, our driver, brought us to Blue Flag Kilmurvey Beach. One of the ROMEOs tested the blue flag by having a swim. (It is still blue flag). 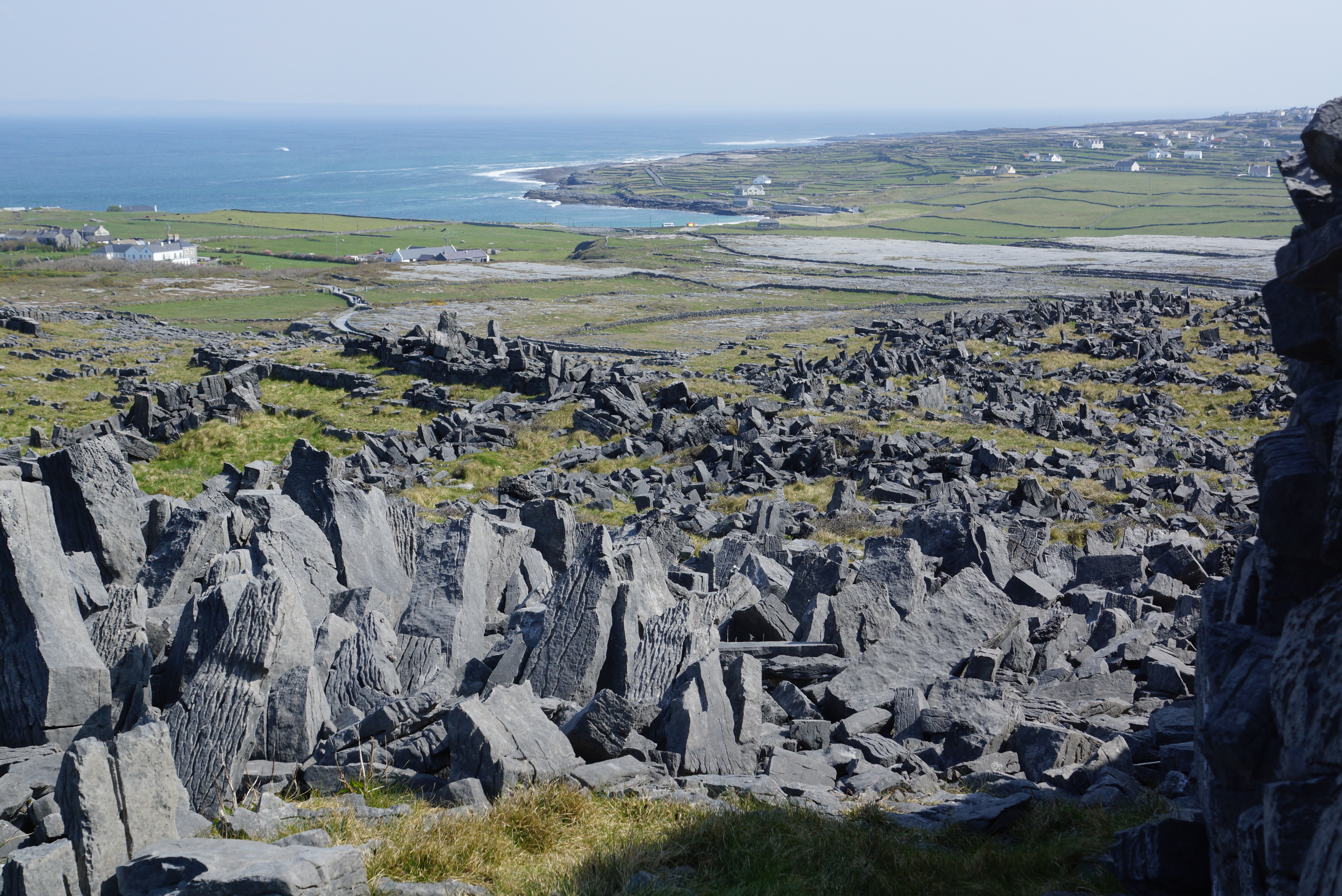 On the way back to Kilronan, our driver, Gabriel, gave a running commentary, and pointed out many of the island’s features and famous places. Back at Kilronan, minor (fast) refreshment were swallowed down in the Tigh Joe Mac Pub Kilronan Hostel departure lounge.

While at the departure lounge, the ROMEOs were greatly surprised to meet Barbara. She had made a great effort to take time off and travel from Rosaveal to meet the ROMEOs. Barbara is an islander, and is married to the Captain of Saoise Na Farraige.

Barbara was the link person on the island and was a vital help in introducing the island contacts for our chief ROMEO. In appreciation, the ROMEOS presented Barbara with a bouquet of flowers. 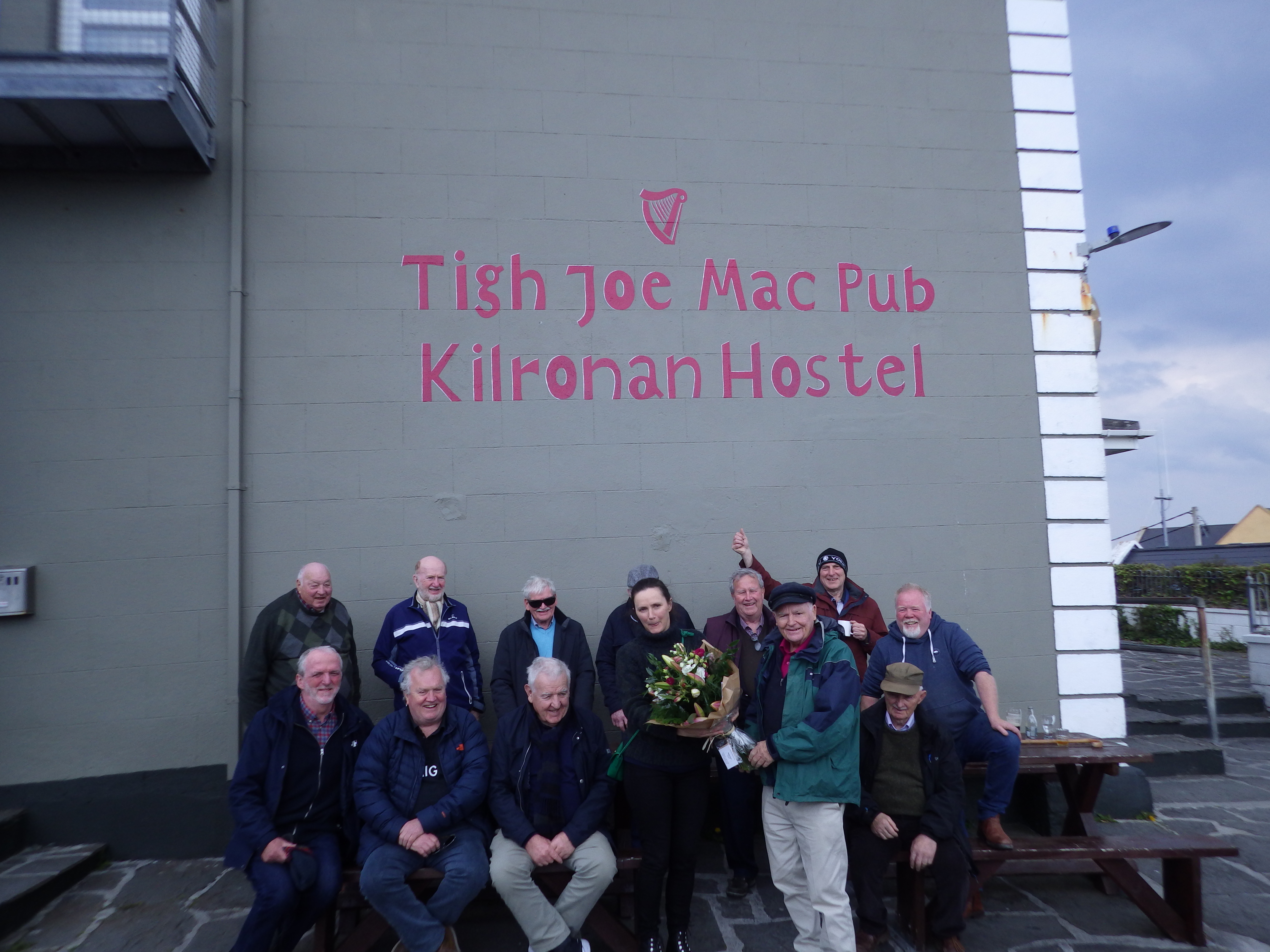 Sadly, time to leave the Island with great memories of our visit. All aboard Saoirse Na Farraige at 15.30. We are on route to view the spectacular Cliffs of Moher from the sea. Many had seen the cliffs from land; however the view from the sea is stunning, and well worth the trip by sea.

We arrived to the cliffs viewing point, Hags Head, and turned North for a 1-hour viewing of the fabulous cliffs. By arrangement with the Captain, Saoise Na Farraige was turned around, and slowed down adjacent to Branan Mor sea stack. A wreath had been specially commissioned in the Howth Yacht Club Burgee Colours. This wreath had been made in memory of five ROMEOs who are sadly passed away: Denis Twomey, Seamus O’Carroll, Edie Kay, David Appleyard (Chunky), and Neville Maguire. 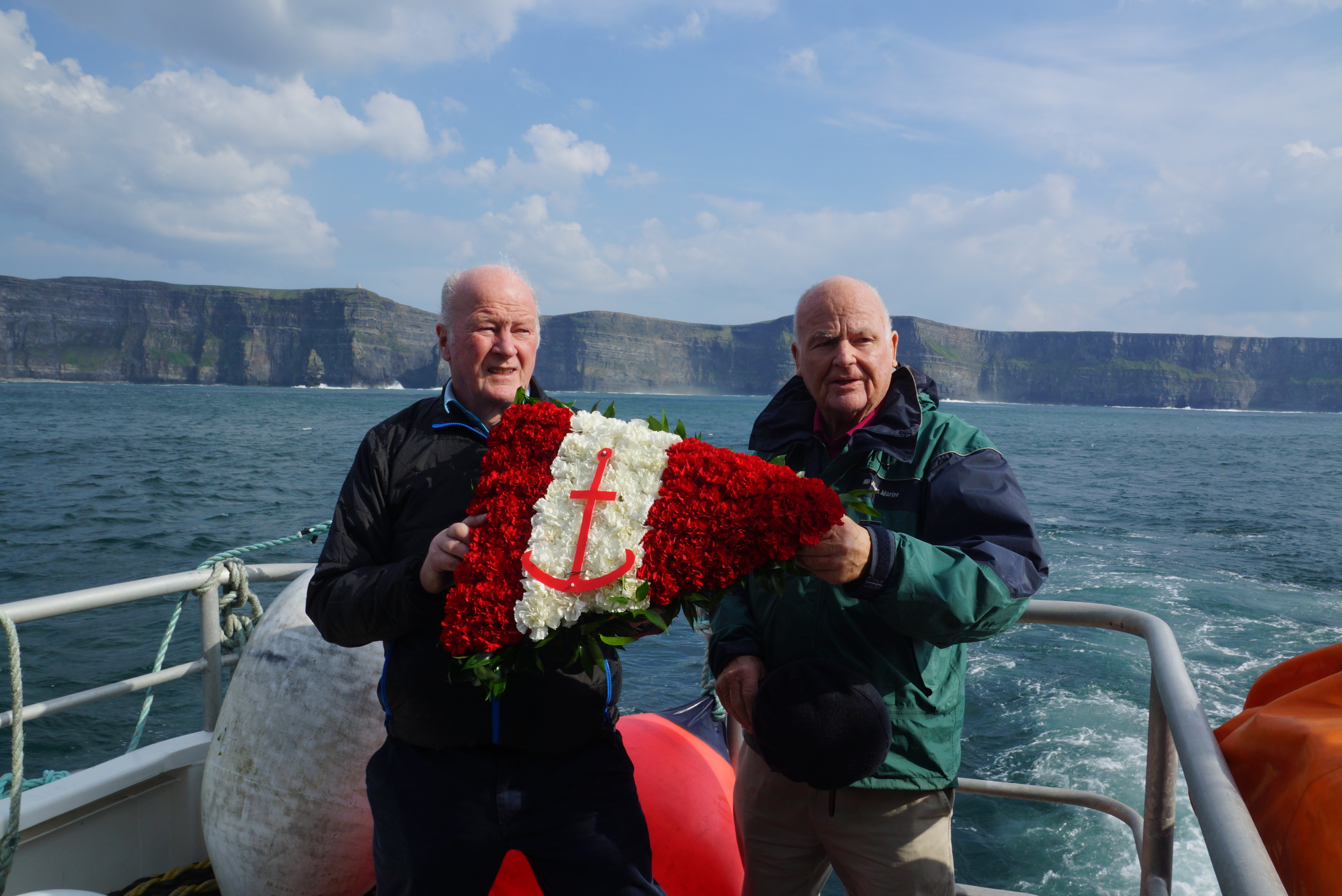 Howth Yacht Club Commodore, Paddy Judge, and our Chief ROMEO, Gerry O’Neill, were positioned at the stern of the boat. The Commodore placed the wreath in the Atlantic.

The memorable occasion was witnessed by all the ROMEOs together with crew and passengers. The Commodore expressed thanks to the Chief ROMEO for arranging the special occasion and trip. A minute’s silence was observed.

Full speed ahead to Galway Docks, where the 31 ROMEOs disembarked and headed in the direction of the train station. There were great memories of a great day on Aran Islands and the Cliffs of Moher, and the wreath-laying ceremony. 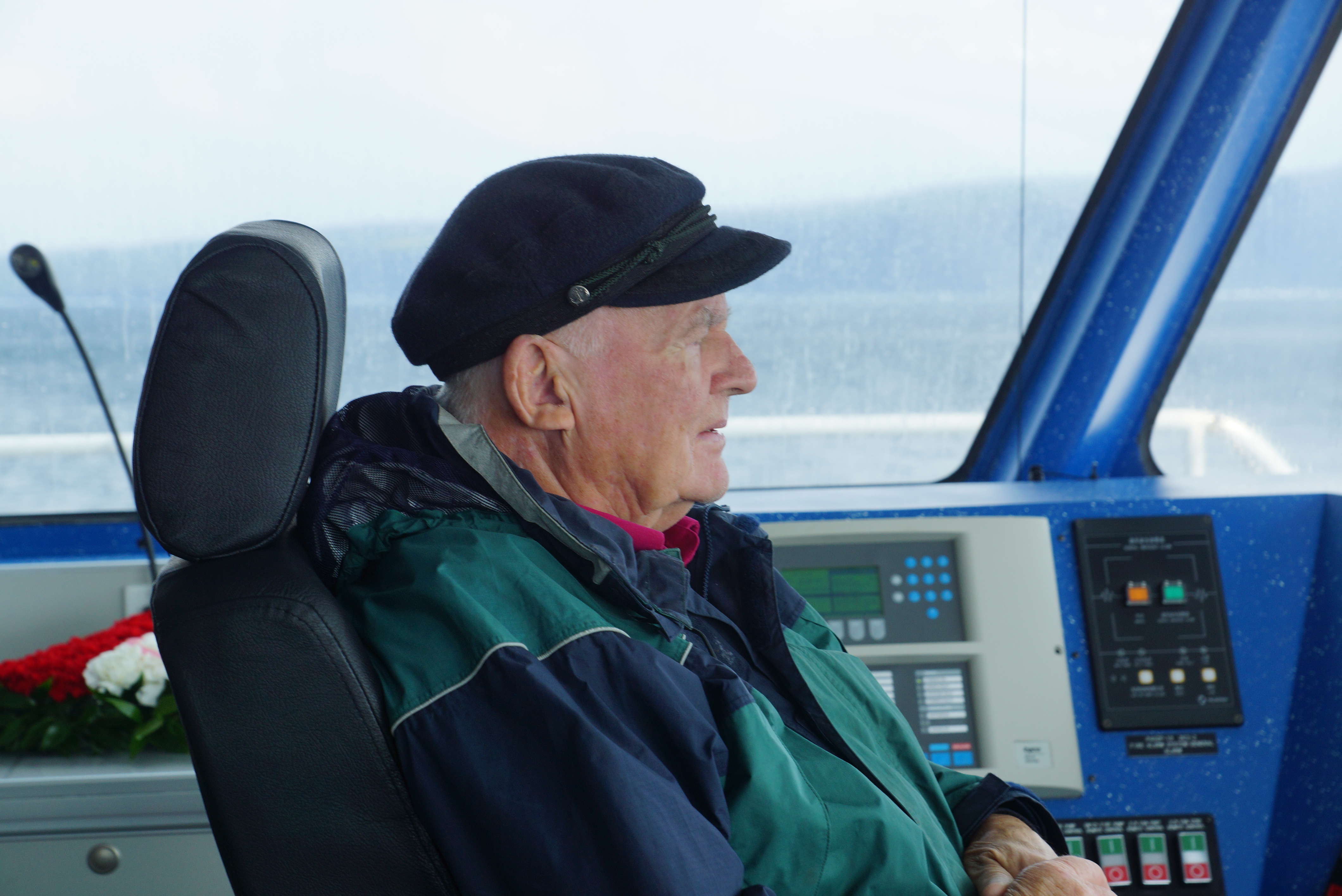 It was great to have our seats reserved as the train was full. The train arrived in Heuston bang on time, 22.00. A luxury coach had been booked, and dispersed ROMEOs to their respective houses.

Special Message for Chief ROMEO: Thank you, ROMEOs, for joining me on this memorable trip. I am looking forward to seeing you all soon again. A special thanks to those who helped with the arrangements. 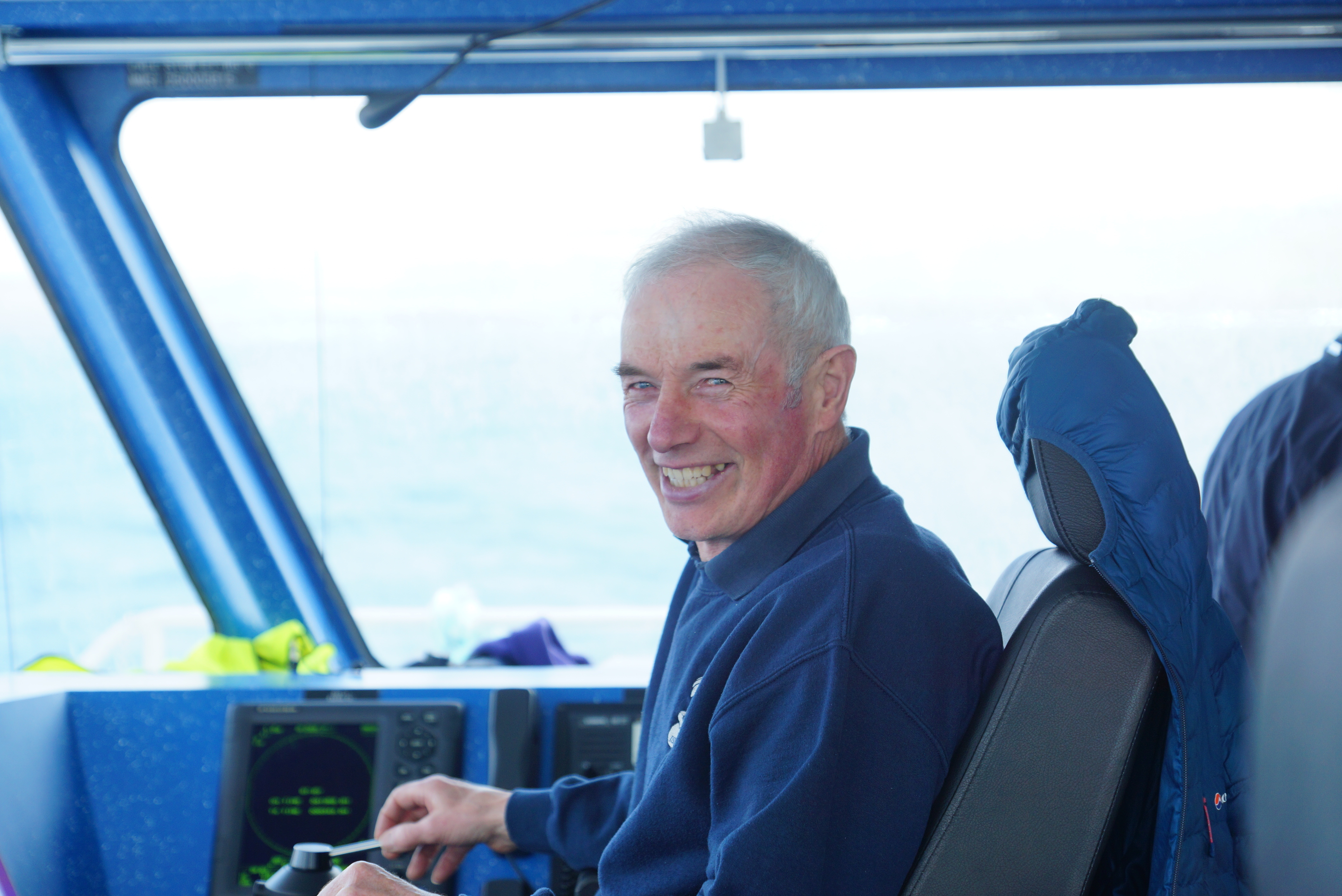 Thanks to Howth Yacht Club for giving Commodore Paddy Judge the 2 days off so that he could join this ROMEOs adventure.