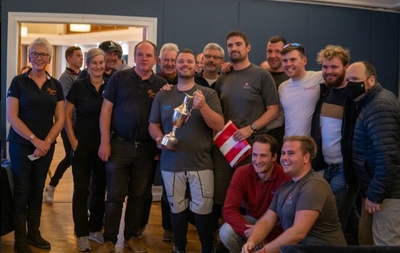 October 16th brought the Beshoff Motors Autumn League to a conclusion with the battles for victory going right to the wire in some of the Classes.  The 93 boats experienced some of the best weather ever served up during an Autumn League and all eight of the planned races were completed over the six weekends.

With only one discard allowed, whether skippers could keep more than one big number off their score card was a challenge that decided the outcomes for some of the Classes.   The consistently low wind speeds, never getting above 14 knots and quite often below 8, rewarded those with the best skill, patience and weather / tide awareness or, as those prone to begrudgery would claim, the luckier sods – although ‘sods’ was more often replaced with a noun about ancestry that is no longer PC.

Based on the results achieved by some of the winners, the begrudgers would be better honing their own skills to match those of their opponents who consistently found their way to the front.  Checkmate XVIII (N Biggs) and Dux (A. Gore-Grimes) both counted four race wins each, Insider (S&D Mullaney) and Tiger (S Harris & F Hughes) both clocked up six and Demelza (W Laudan & S Ennis) made a clean sweep of it with eight race wins from eight in Cruisers 5.  The prize for the best boat overall went to Checkmate XVIII for their victory in Class 1, winning them the Heineken Trophy - appropriately named given the thirst inducing conditions over the entire event.  The Olympus Trophy for best team went to Team T.I.T. – Trick or Treat (Puppeteer), Insider (Class 3) and Tiger (Class 4).

With the Summer season now officially put to rest, the Winter sailors are hunting out their thermals / wet gear and trying to work out whether the Autumn League’s six weeks of sunshine has emptied the good weather kitty or will global warming allow them escape the backlash from the weather gods trying to restore the average.

Both the Brass Monkeys keelboat series and the Frostbite Series for singlehanded dinghies get underway on Sunday, November 7th.  After the COVID enforced cancellation of both events last year, the sailors who relish getting afloat on crisp November and December mornings are champing at the bit.  This year will see the Laser / ILCA dinghies being joined by the RS Aeros, a recently developed lightweight dinghy that is providing those who like their own company afloat with an alternative to the Laser, which is now approaching the fiftieth anniversary of its development and still providing great racing.  The Brass Monkey fleet is expected to see some J80s involved, despite them lacking the comforts that make winter sailing more tolerable for some of the other keelboats

Sponsorship has been secured for both events with Bright Motor Group supporting the Brass Monkeys and Key Capital getting behind the Frostbites.  The Notice of Race and Entry Forms for both events are now posted on the HYC website and all those planning to compete are requested to get their entries in asap so that the organisers can plan handicaps for the keelboats and arrange RIB support for the dinghies.