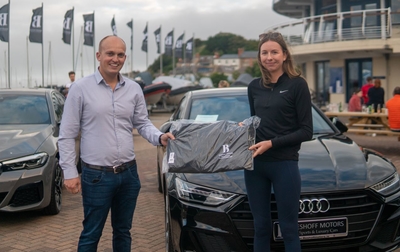 The sunshine made it a great day for late September sailing and the steady south-easterly breeze greeted the fleet with a gentle 10 knots and climbed to 16 as the afternoon progressed.  The Race Officers made full use of the ‘pet’ conditions to set Windward Leeward courses and complete two races on both the Inshore and Offshore race areas, catching up on the scheduled second race lost the previous Saturday when the more variable conditions limited the fleets to a single race.

With eight Classes spread over the two course areas, those looking from Portmarnock beach would have seen what looked like walls of sails sliding across a flat sea but, within the Classes, there was lots of intense competition, particularly at the starts with the ebb tide pushing the boats across the lines and the excitement being added to by words of ‘encouragement’, a few gentle coming togethers and some early starts and recalls.

Race 4 saw the Series discard introduced and allowed everyone to shed their worst score to date.  However, in a few of the Classes there is already a settled order developing and some of the leaders are putting scoreboard distance between themselves and their opposition.

On IRC, In the 12 boat Class 1 fleet, Nigel Biggs Checkmate XVIII bagged its third win of the series and now enjoys a six point lead over Checkmate XV and Jeneral Lee.  Similarly, in Class 3 the Mullaney’s Sigma 33, Insider, has three wins to its credit and a three point margin over Scandal with Kilcullen in third place.  Both Scandal and Kilcullen are J24s and are being raced by members of the HYC K25 Squad so keen competition for bragging rights is assured over the rest of the series.  As opposed to the relative comfort enjoyed by the Class 1 and 3 leaders, in Class 2, the X302 No Excuse (Wormald, Walsh, O’Neill) enjoys a single point lead over Impetuous but with there are three X302s chasing the pair and only a margin of 1.3 points between first and fourth places.

Tiger (Harris / Hughes) has established itself as the boat to beat in Class 4 with the battle for 2nd being fought between Bite the Bullet and Spellbound.  In Class 5 Demelza, the now venerable Shamrock of Windsor Laudan and Steffi Ennis, is the only boat in the event with a clean sweep of first places on IRC.

On ECHO, Class 1 sees the much-photographed Soufriere (Stephen O’Flaherty) of James Bond fame showing that it has speed as well as style and its two race wins from the four sailed to date leaves it tied for first place with Jeneral Lee (C&K Kavanagh).  In Class 4 Toughnut (D Skehan) is leading while in the other Cruiser Classes the same boats share the lead on both IRC and HPH.

In the one design fleets the Puppeteer 22s are the most numerous with 17 boats battling it out and Gold Dust (Walls / Browne) lead the pack on scratch by - in Pup terms - a comfortable three point margin.  The Howth 17s are the Class where the bookies may find it hardest to predict a winner with only two points spanning the first three boats, Deilginis (Massey/Toomey/Kenny) being chased hard by Isobel (B&C Turvey) and Oona (P Courtney) and with no boat having more than a single race win to date.  The Squib fleet sees Kerfuffle (E Dalton) maintaining the form that saw him taking the recent Squib Easterns and it secured a first and a second on the WL courses to add to its victory in the first race of the series while Crackertoo is just 2 points behind.  On the handicap results, Odyssey (P&R Byrne) leads the Puppeteers, Tears for Fears (N Monks) tops the Squibs and Bobolink (Doyle/Finnegan/Walsh) holds first in the Howth 17s.

The two races sailed gave the crews a good work out and left many a thirst to be quenched under the sunshine, in a socially distanced way, when the fleet came ashore.  The prizegiving for the first two Saturdays was carried out on the Club deck, in the midst of some of the sponsors very desirable motor vehicles, with Jeremy Beshoff presenting the first of the hard-earned 2021 Beshoff Motors jackets to the race winners.

Pictured above is Lara Jameson collecting her prize for Changeling with Jeremy Beshoff, Beshoff Motors

Thank you Annraoi Blaney for the wonderful photos - anyone wishing to purchase a print of their boat in action can contact him on 0862322643.