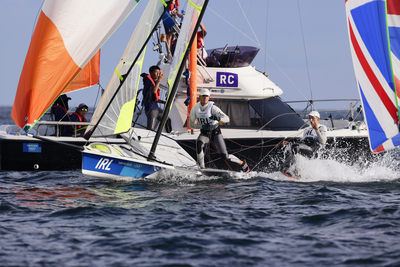 In a result that matched their opening race of their first Olympic Regatta, Ireland's Robert Dickson and Sean Waddilove convincingly won Race 12 of the Men's 49er Skiff event in the waters off Enoshima last week.

Although racing was delayed for several hours due to light winds, the pair were clearly on form from the start of racing by scoring a third place in the first race that day.

Another strong score was looking likely as they held third place for much of Race 11, until a miscalculation of the effect of the current in the race area and dropped them to 17th place.  However, the pair held their form and their nerve through to the end when they turned the heads of many in this elite competition and won the final series race with an impressive 24-second lead. That result matched Race 1 on the previous Tuesday when they had won in a photo-finish, beating Britain's Dylan Fletcher and Stuart Bithell in what was a major upset to the ‘form guide’ and brilliantly captured by photographer David Branigan on the finish line and pictured above.

However, the overall result left the Dublin crew in 13th place, just 8 points shy of qualification for the Medal Race Final on Monday.  Things might have been so much better if they hadn’t found themselves embroiled in controversy following the much-publicised disqualification from 2 races, where they were adjudged to have used harnesses that were 90gms over the 2kg limit. True to form, they never lost focus and their ability to rise from what must have been a devastating blow to their target of qualifying for the final medal race, was an inspiration to onlookers from around the world.

"I'm pretty proud of the way we sailed, it's really good to finish on a high with the last race and pretty amazing that we got two race wins," said Robert after racing ended.  "We've learnt a lot from these games and we're going to bring that forward to (Paris) 2024."

The next Olympic Games had originally been Dickson and Waddilove’s goal in the campaign plan until the Covid pandemic delayed the Tokyo Games by 12 months.  The added time allowed them train further and qualify Ireland in March of this year.

"My biggest takeaway from this week is that we were very much capable of competing against these guys that have done multiple Olympics and have medals under their belts and there's no reason why we can't get to 2024 and be medal contenders," said Sean.

"As expected, it was a very different Olympics," said James O'Callaghan, Performance Director with Irish Sailing.  "We've seen what our sailing athletes are capable of with some incredible individual results - we can look ahead to building on this."

It would appear that the future is bright for our local heroes.