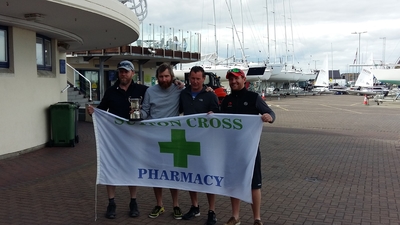 In a season where many sailing events have been chalked off as COVID consequences, the Puppeteer Class became one of the exceptions over the Aug 29th/30th weekend.  With the sponsorship of Sutton Cross Pharmacy, Howth YC hosted the Class Championships and, after 6 races in a variety of conditions, the winner was Shiggy Shiggy, owned by Paul McMahon and Laura Ni hUallachain.  The winner on handicap was Odyssey, owned by Philip and Roslyn Byrne.

Whilst the fleet racing in Howth YC in a ‘normal’ year extends to 20 boats with the hope of some visitors from the Northern Ireland fleet for the Championships, the COVID fallout brought the entry down to eleven boats.  The competitors were greeted on Saturday by a 20 knot northerly breeze with a lumpy sea that offered the fleet plenty of challenges but not the conditions most of the crews had hoped for.

Race Officer Harry Gallagher and his management team had a choice of course configurations to draw from - Windward Leeward, Triangle plus Windward Leeward or around the Howth YC fixed marks using one of the Club’s weeknight courses.  To make the opening race less demanding for the less well practiced, the first race used a Club course and a pattern that was to become apparent over the weekend was quickly established – the lead being battled for between defending champions Yellow Peril (Murphy / Costello), 2019 Autumn League winners Trick or Treat (Pearson / Blay) and the newbies to the Puppeteer fleet on Shiggy Shiggy, sail number 1.  Through dramas of broaches, fluffed gybes, gusts and place changes, the first race made its way to a conclusion with Yellow Peril taking the win and Trick or Treat and Shiggy in second and third.

Shiggy Shiggy (so good it was named twice) was purchased in 2018 by its current owners in a ‘somewhat tired’ condition.  After being lavished with TLC over the last two winters and during the 2020 lockdown by Laser and SB20 ace Paul McMahon, it now looks as well and certainly better kitted out than at any time in its 40 year history.  With its updated mast and a new suit of UK Sails’ best, it is also probably going quicker than when it was launched as the Puppeteer 22 prototype in the late 1970s.

After the excess of the first race, the wind eased enough over the following two races to allow most of the fleet hoist their larger headsails but the racing stayed just as close and the waves and temperature just as unpleasant.  After three races, Trick or Treat and Shiggy had made it a three-way split of the winners’ guns to leave Trick or Treat as overnight leaders with only two points covering the first three boats.  However the conditions over the day left three of the fleet out of action for Sunday through rudder loss, deck damage and engine problems.

Sunday brought more benign conditions – 8 to 10 knots with sunshine and a flatter sea.  Shiggy was quickly out of the traps and took the win in Race 4 with Yellow Peril just behind and Gannet (T Chillingworth) pushing Trick or Treat all the way to the line before Trick or Treat grabbed third.  Race 5 saw Shiggy and Yellow Peril again in the top spots but this time Gannet bagged the third rather than see it escape at the last minute.  Going into the last race, the title chase was down to just two boats, Shiggy being the favourite and only having to finish third or better to win the title while Yellow Peril had to win and rely on Shiggy having a calamity.  Shiggy again led Yellow Peril home with Gannet getting another third.  Four wins and two thirds from six races is a winning score in any fleet and Shiggy Shiggy was confirmed as the 2020 Puppeteer 22 Class Champion.

The winner of the handicap event was Odyssey, which sailed a very consistent series and was always on the heels of the leading group on the water.  Odyssey also collected the dubious honour of being the only boat called OCS at a start, despite the numerous close shaves that resulted from crews seeking to check the awareness of the Race Officer before breathing sighs of relief at the broadcast of ‘Clear start’.

A socially distanced presentation of the winners’ cups was carried out ashore with the Class’s appreciation for the continued sponsorship of Sutton Cross Pharmacy acknowledged by Class Captain, Peter Wilson, who also thanked the Race Management team and the Jury Chairman, Emmet Dalton.  Hopefully the volume of Arnica, Voltarol and other remedies required after Saturday’s racing will not overly deplete the sponsor’s stocks.