Fingal Cruiser Challenge 2nd Race heads to Kish and back 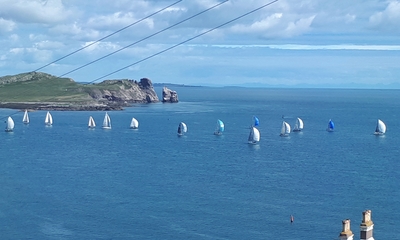 The second race of the Fingal Cruiser Challenge took place on Saturday 11th July again in light winds, a westerly 8 knots, saw the fleet of 16 head off East from the pier under spinnaker (for those who opted not to whitesail).  Unfortunately the little wind there was faded away after an hour into the race and left the fleet drifting out at sea for almost 2 hours, gazing towards the Kish lighthouse, with the tide flooding and pushing them further away.  Some took this as a sign to put on engines and turn from home, however those just glad to be out on the water, hung on in there and eventually the winds came in from the South.

Dermot Skehan with his well campaigned Toughnut had taken a flyer at the start and stayed in close to Balscaddan staying out of the tide and hugged the cliffs heading towards the Baily.  Some thought him mad at the time, however quickly changed their tune, when his plan paid off and he was first to hit the wind and sped off towards the Kish and then home.  4 hours to get to the Kish, turned into a quick 1 hour return under spinnaker most of the way.  The first four finishers on the water after almost 5 hours, were Toughnut, Mojo, Dux and Mata. Demelza and a number of others followed soon after, however it was Terry McCoy and Out and About who win the prize of perseverance, when they finally announced their finish time of 17.05.45, some 7 hours after the start!”