DeDannan gets back to Athens 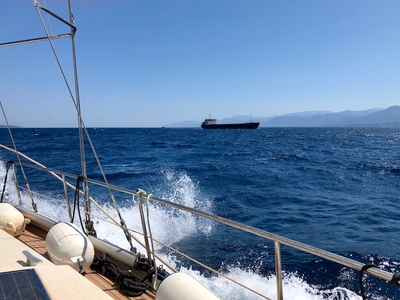 Tony Olin reports in his own inimitable style from his continuing cruising adventures and from Greek waters in the late summer.
It's August 27th and we arrive back to Messalonghi Marina after a long and tiring journey from Dublin, our Aegean Airlines flight took off at midnight and arrived in Athens at 06.00am, then pick up a hire car and drive for five hours to here. The new “German Motorway” as the Greeks refer to it is up and running with payment of €30 in tolls, it is a sore point with most Greeks that travel between Athens and here and most of them still use the old pot holed road rather than pay the money. We arrived and unloaded our baggage, aired DeDanann then walked over to the marina taverna for a 60th birthday celebration of bacon, egg and chips for me and it was off to the bed as we were all knackered.
We didn’t hang around Messalonghi for long, and headed out the canal into the gulf of Patras, the wind was from

the east and the sea was high and progress was slow. We had intended to go all the way to Galaxidi some fifty miles or so but we weren’t up to punching through 25 knot head winds all day. I had heard about a little fishing village west of the Rionn bridge that nobody ever goes to called Kryoneria, it affords good shelter from the prevailing winds down here and is accessed through a man made canal dredged to three meters with mooring between the fishing boats for a few visitors when they come.
We made it through the narrow canal and with the help of an elderly Greek fisherman we squeezed into a spot on the quay, a couple of my little devils of Jameson Whiskey brought a smile to his face, Eferisto he said as he went back to his net mending, the old Greeks love Irish Whiskey, they put it into their coffee and just sip away at it usually with a fag hanging out of their mouths.
Kryoneria is a little backwater village, they don’t speak any English here, it had two Greek tavernas serving only very traditional Greek fare but they were happy to see us come to their village and we eat well that night for very cheap.
In the morning I took Alfie for his ramble, a young migrant family living in a banger of a fiat punto had pulled in for the night beside us, four young adults and four very young children with weather beaten skin as brown as is 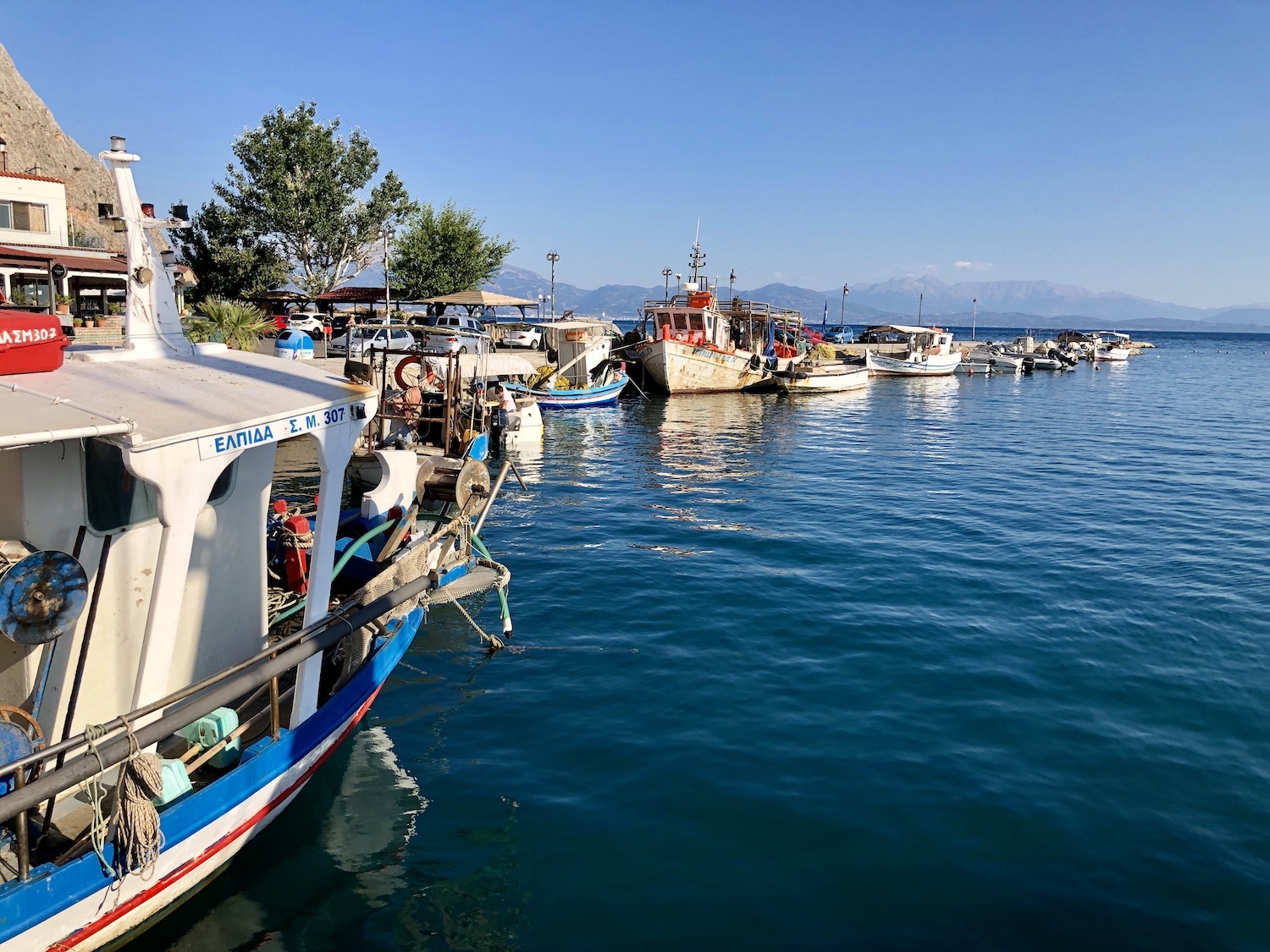 possible to have, they were being washed in the sea by there young mothers as their fathers lit a little fire of kindling in a steel bucket to cook breakfast, one of the young mothers had walked into the sea, lifted her long dress as she hunched down to relieve herself with the up-most modesty given her terrible situation. They had all slept under an olive tree surrounded by goats, on old coats and blankets that I suppose was comfortable enough in the warm climate down here at this time of the year.
As I rambled along the country lanes I was taken back to my childhood growing up in Finglas West, there were lots of fields among the new houses that were being built by Dublin Corporation in the sixties, many tinker families were camped in those fields, large very monetarily poor families living in the traditional tinker wagons where the mother and father and youngest babies slept, the older children slept on old coats and rough auld woolen blankets under an auld truck canvas cover held up with the branch of a tree.
I remembered well, calling for my school mates in that community, the Maughans, the Browns, Conyingham and Joyce boys, often wakening them up huddled together and freezing cold of a wet January morning on our way to the school, life was hard for these people and only made easier by the kindness of the nuns in the local convent who fed and washed their rags of hand me downs and warmed their hungry stomachs with a bowl of good Irish porridge, a cup of tea and bread and jam and of course, a piece of holy communion to send them on their way. They started school half an hour later than us to allow for this.
Believe it or not, one of these guys went on to become an officer of the Irish Army serving with distinction in several parts of the world, another a wealthy mobile home dealer in Kildare, and another made his fortune in the scrap business.
Thank God and for the progress made by the Irish people, we have in Ireland moved on from those times, not so much the case here in Greece, where migrants, and there are many, still live a very poor itinerant existence, where the children (unlike in Ireland) are not being properly educated
We didn’t delay and headed back out to the gulf of Patras into more head winds, we passed under the Rionn road bridge with the intent of going all the way to Galaxidi, as we neared the little island of Trazonia we were getting hungry and cooking on board was going to be difficult, the decision was easily made to run into the abandoned 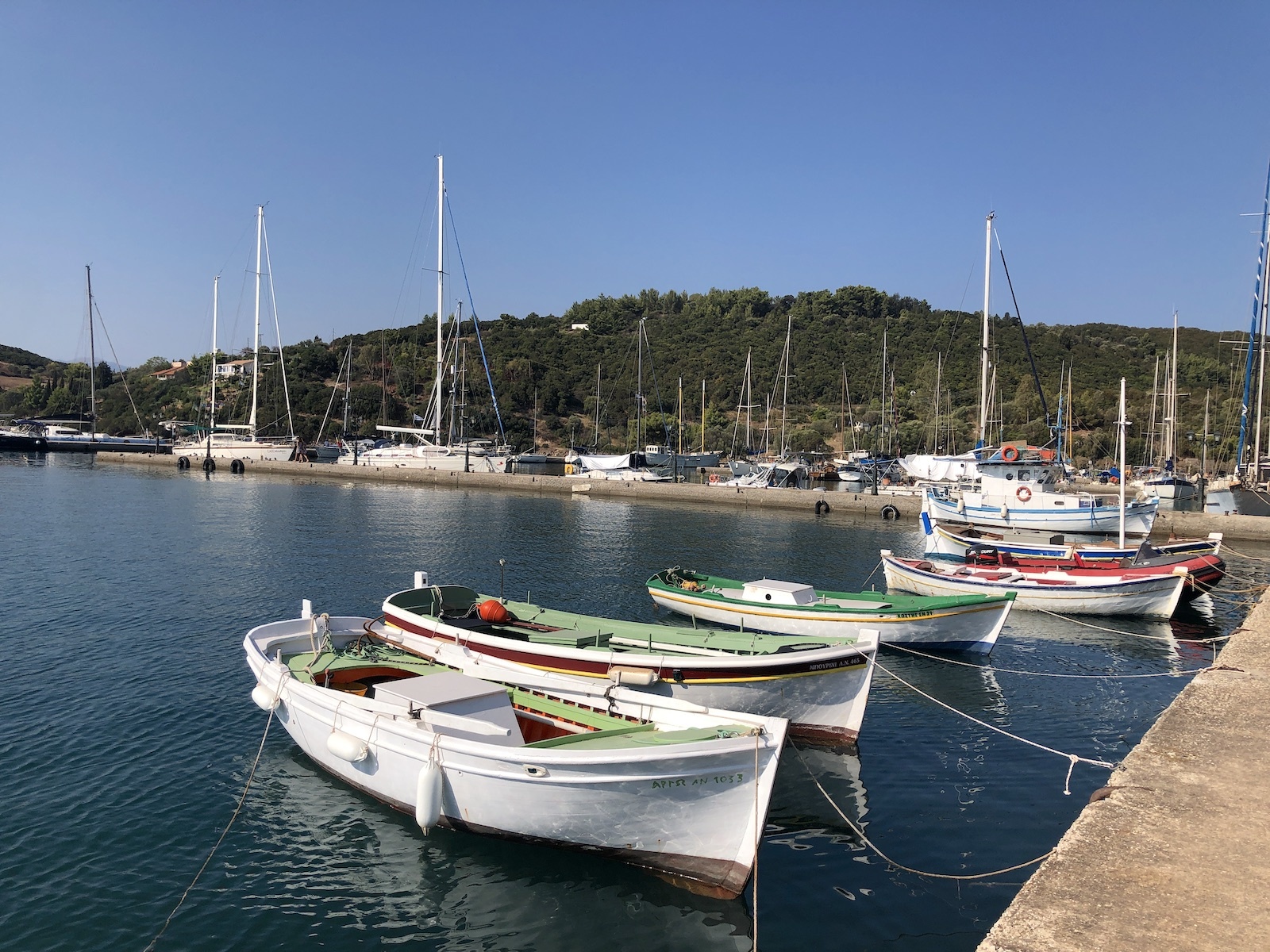 marina here in Trazonia for the night.
We were delighted to see the marina has been taken over, all the abandoned boats are gone the sunken wreck has been removed, lighting, water, bins installed and some landscaping works are underway. It is a huge improvement since we were last here a couple of years ago, of course a charge of €15 per night is collected by the new port authority, which we were quite happy to pay. Free ports were common over here until lately, the problem is, they attract cheapskates, the Greeks refer to them as colonists, who leave bangers of boats lying almost derelict for years, they put nothing into the Greek economy and would live in your ear mooching drink and food from the more prosperous cruisers who come and go, they also take up the best mooring spots and are a nuisance, they then head home for the winter leaving their boats unattended. Charging even a modest fee stops this as these guys won’t pay for anything.

The following morning we had another windward passage for a few hours to the wonderful port of Galaxidi, as we backed up to the town quay, Howth transatlantic sailor and now retired Coastgaurd, Norman Fullam was on hand to take our lines. Galaxidi is a delightful port to spend time in and just relax, but we had a schedule to keep to get to the Island of Syros, in the Aegean Sea for a meet up with the Amel owners group and we could only stay for one night. We had dinner with Norman that night as we talked about his many years at sea and his time in the radio station at Mallen Head.
We reluctantly left the following morning for the Korinth Canal some 40 miles distant, the wind had come around NNE and we sailed all the way in a sea that was calm for the Gulf of Korinth.
The transit through the canal is always a joy, but tying up at the pay station is difficult with no marineros to take lines, the quay is high with only huge bollards more suitable for ships to tie up to and there is always a good wind funneling one way or the other through the canal. We managed in anyway, and off I set with the boat papers to pay the €330 exorbitant transit fee, I complained about the absence of a marinero, but it went in one ear and out the other, so there was f!!! all of a gift of my Irish Whiskey for this guy and I returned to DeDanann two little devils the richer.
We untied our lines and went around to the anchorage in Kalamaki bay just off the big oil refinery and dropped anchor surrounded by several huge Tankers awaiting to dock there. This is a grand spot and well sheltered by the prevailing winds to rest up if coming out of the canal late in the evening, the holding is good in five meters on sand with the big ships keeping out in deeper water, the ships, the refinery, the beach and the motorway to Athens all provided an interesting back drop as we had our dinner watching the sun go down over the Korinth to the west.
I listened to a great story about our own Brendan Behan on RTEs - Doc on One, the internet is marvelous for cruisers in this day and age, I then tuned in to Ceili House before hitting the sack.I once worked with an old painter and decorator, Tommy Murphy, he’s passed on now, but he often regaled us with stories of his time working with Brendan Behan, before he found fame and fortune. He told me that Brendan would often boast that he would one day be famous, and that indeed, did come to pass. Brendan engaged his old boss with whom he had a difficult relationship with due to his drinking and missing work to come paint and decorate his new home in Ballsbridge, Tommy told me he would come out of his bedroom in his dressing-gown at midday and look at his old workmates toiling away and say,  Didn’t I tell yiss - I’d be famous one day!  Tommy said he was a good painter and a great auld Dublin character for sure.
After a nice fry up on board the next morning, we set course for Zea Marina in Athens where we had a reservation for two nights. It was a busy four hours zig-zagging among the huge freighters, tankers and ferries coming and going out of Athens. I put up all sail and motor-sailed with right of way straight through the lot of them.

Whatever about the freighter and tanker captains granting us an easy passage the ferry captains would just soon as run you over for all the room they would give between us. I have found over the years cruising that you have to stand firm with these guys or they just bully you out of their way as the speed from port to port.

The entrance into Zea Marina is indeed a grand one, you can almost smell the money coming from the super serious kick ass boats that dwell here. Porche’s, Massarati’s, 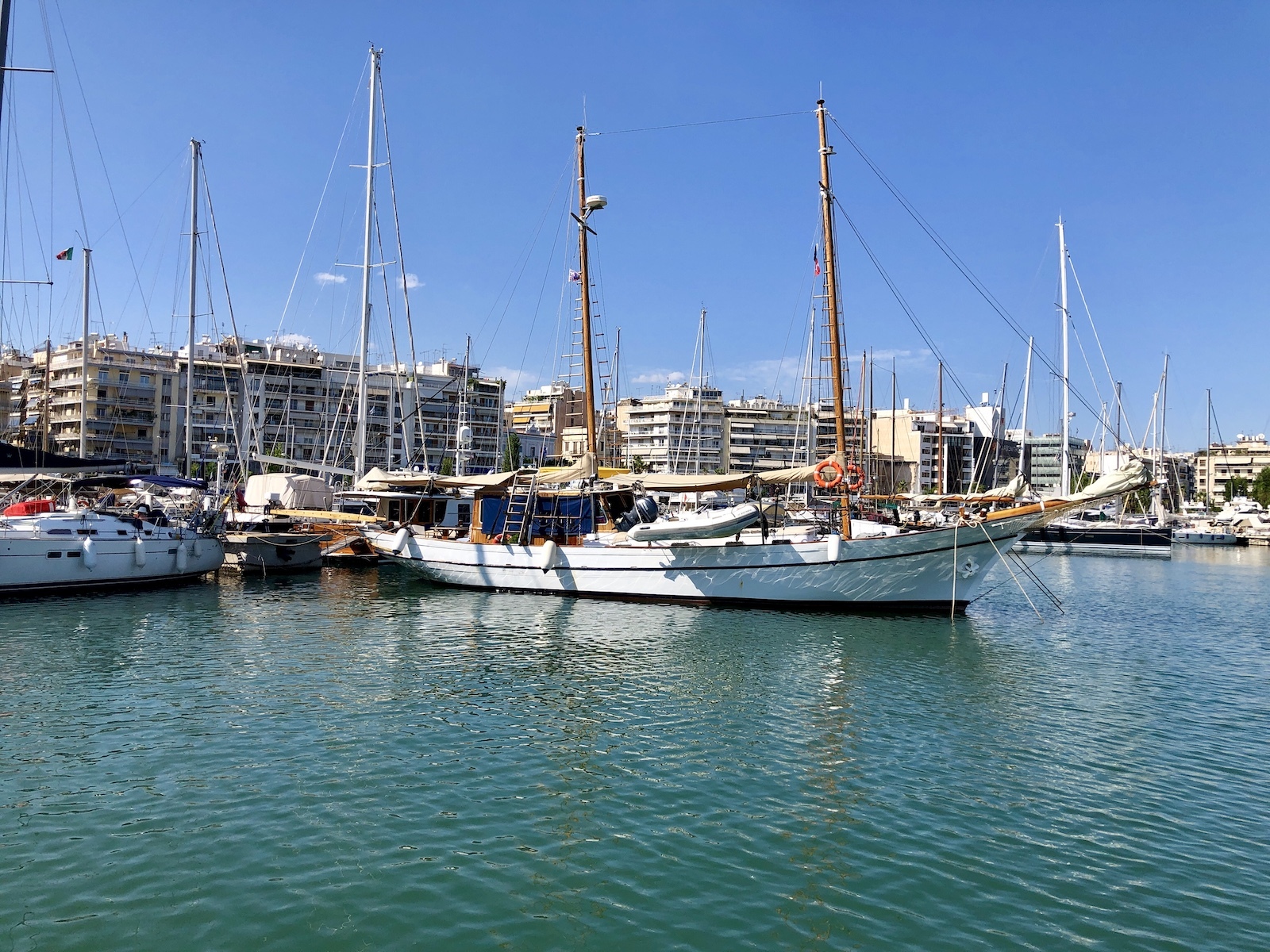 and Ferrari sports cars parked along the dock as we meandered among the many pontoons to our spot in a more humble part of this old marina.
We dined well for both nights in the super trendy restaurants that line the dock where the big boats moor, wellyou know the saying, If you can’t beat them, Join them, and that we did. One would never think for a minute that there is a serious financial crises, far greater than our own at home, going on in Greece, after a few nights in this place.
I think they're all fooling us.
DeDanann out! 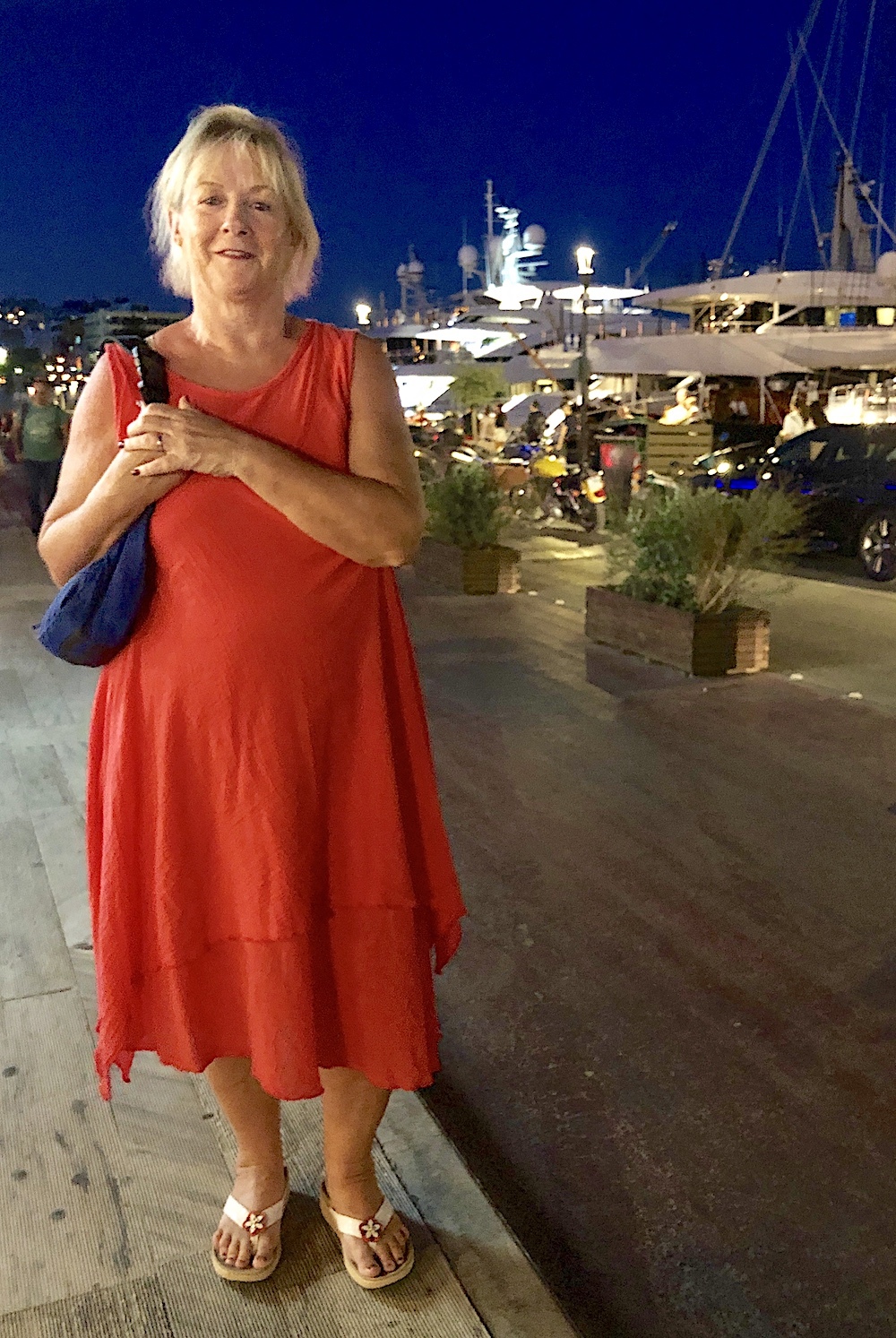