Howth’s Autumn League gets into gear 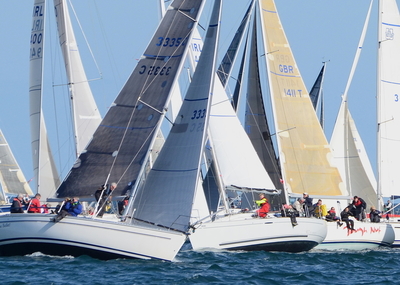 The 2019 Howth YC Autumn League got underway on Sat, Sept 15th, with Beshoff Motors in place as the sponsors and an array of their very impressive high-performance offerings on display to tempt those looking for some off-season distraction.  (Speculation about which models will end up as event prizes remains to be resolved in six weeks’ time!)

The entry list swelled to almost 100 boats in the lead-up to the event.  The entries are well spread across the one-designs and the handicap keelboats fleets with one-designs shading it in terms of numbers. Puppeteer 22s, Howth 17s, Squibs and J80s all mustered sizeable entries while the keelboat fleets were allocated to Cruiser 1, 2 and 3 divisions with the Non-Spinnaker fraternity being spread over two divisions, Cruisers 4 and 5.

The first day produced ‘Riviera-style’ conditions with blazing sunshine and a balmy 10 – 12 knot breeze belying the September date.  The wind was generally south westerly, oscillating between 230 and 250 degrees and, in combination with the ebbing spring tide, made decisions challenging for both the Race Officers on the ‘inshore’ and ‘offshore’ courses and for the tacticians – what wind direction would predominate and which side of the upwind legs would be best.

Good news for the sport in general, and one-design racing in particular, are the well-supported Squib and J/80 Classes.  Howth’s Squib fleet stretched to 40 boats in its heyday and then faded away to nothing until a determined group of members decided three years ago that it was time for a revival.  Former HYC based boats that had migrated to the other Class strongholds in Ireland were sought out and brought back to join a few that had not previously been in the Club fleet.  Some of the newcomers came with established reputations while one in particular was a bargain basement purchase from the UK via EBay.  The 9-boat entry is a good omen for the future of the Squibs on the peninsula.  A surprise guest helm for Race 1 was Flor O’Driscoll, normally seen on a J24 but getting back towards his dinghy roots in the appropriately named Absolutely Fabulous. Simon Sheahan and Derek Bothwell fought for the lead throughout the race before Simon triumphed.

HYC members have been to the forefront in getting the J/80 Class established in Ireland and it boasts an impressive array of sailors who have achieved success at the highest levels.  The 7-boat entry list for the event includes former Olympians Robert Dix and Dan O’Grady, multi championship winner and sailmaker Philip Watson and Dun Laoghaire visitor Jonny O’Dowd, as well as Class stalwarts Pat O’Neill and Nobby O’Reilly and the newcomer combination of Cooney / Kneafsey, who have just acquired Joyride and are competing in their first event.  Robert Dix’s Jeannie took the gun this week with Jonny O’Dowd taking second.

The Puppeteers and Howth 17s are HYC and Autumn League stalwarts and the Puppeteers took the bragging rights as the largest one design fleet with 16 entries, just pipping the Howth 17s with their 14 boats.  The consistent Trick or Treat (Alans -Pearson and Blay) took their first win in the Puppeteers with Gold Dust (Scorie Walls and Declan Browne) second while Rita (Marcus Lynch and John Curley) had a minute to spare over Isobel (Brian & Conor Turvey) in the 17s.

Racing on the ‘Offshore’ course was made more complicated by the discovery of the last rounding mark having gone missing over the last few days. When the leaders arrived, there it was – gone. Only one redress request was lodged and duly granted.

In Class 1, the three J109 entries dominated the 7 boat fleet with Outrajeous (Richard Colwell / John Murphy) eventually pipping Storm (Pat Kelly) by 3 seconds on the water.  Rockabill 6 (Paul O’Higgins) made the journey from Dun Laoghaire to race, arriving just in time for the start, but its close race on the water with the local J109s was undermined by its much higher rating.

In the 12 strong Class 2, the long running battle between the two ‘Checkmate’ Half Tonners, XVIII (Nigel Biggs) and XV (Dave Cullen) was re-run with Nigel getting first blood on IRC in the series. On ECHO, the X302 No Excuse (Wormald, Walsh, O’Neill) did not need any and enjoyed a twenty second win over its sister ship, Maximus (P Kyne).

In Class 3 with 6 boats the consistent Sigma 33 Insider (S&D Mullaney) took first place on IRC with Alliance II (V Gaffney) runner up. The White Sails fleet was separated between Cruisers 4 (8 boats) and Cruisers 5 (4 boats).  Tiger (S Harris) won on IRC in Cruisers 4 while Out and About (McCoy and Creggan) won Cruisers 5.

Racing continues for the next five Saturdays, two races on Windward Leeward courses being scheduled for next Saturday.  The J/80 National Championships will be competed for over both Saturday and Sunday, with the Saturday Autumn League races counting towards the result and the Class then going solo on Sunday for the remainder of the scheduled five races.