Bumper entry at Howth for the Provident CRM Squib Easterns 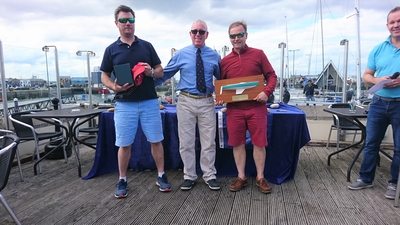 Bumper entry at Howth for the Provident CRM Squib Easterns - in association with Sailors For The Sea. Howth Yacht Club hosted nineteen boats for the Squib Eastern Championships last weekend. The event was run alongside the J24 Easterns which made for a busy clubhouse. While the weather played ball for the most part, wind conditions did offer a stern test for the race management team, ably led by Derek Bothwell. We had a series of shifts on Saturday which caused delays but the fleets were very grateful that the race management team were patient. Thanks Derek, Rupert, Pat, Gaye, John, Dave and Bob!

The Squibs sailed trapezoid courses for the weekend which was a change from the normal windward/leeward. Crews felt it the most as there was a lot of kite work over both days. We completed five races.

Race 1 got away clean and was dominated by Inshallah (Dave Eccles and Michael Wright). Volante (Simon Watson & Jordy Winters) took 2nd which was a great result for them, followed by Quickstep (Gordon Patterson and Ross Nolan).

After a delay, Race 2 got underway with a much-changed wind direction. There was a strong ebb now flowing and the Squib fleet was jumpy. We pushed the line and ended up with two recalls. Derek was forced to whip out the U Flag, followed by the Black Flag, which claimed three deserving victims. Game over for them! There was a robust tussle for the race win finally claimed by Outlaw (Ian Travers and Keith O’Riordan).  Allegro (Collie Dunne and Fiona Ward) and Quickstep completed the podium positions.

Within minutes of the completion of the second race, Race 3 was in sequence, with everyone starting to look forward to a beer after a long day on the water. A Howth boat Tears in Heaven sailed by Peter Wallace and Martin Weatherstone burst out of the blocks and led from the traps to the winning post. Peter couldn’t wait to get to his usual tipple of “Howth Gin and Slimline”. Inshallah and Allegro made up the podium and we all faced a robust sail back to the marina.

The weather on Sunday was as good as it has been on the East coast of late. Light conditions with frequent sunny spells. Race 4 started in a fickle breeze which died off considerably downwind. The leading boats got around the bottom mark before the worst of the lull. The calm lasted about 10 minutes and soon there was breeze enough to get us upwind again. The race management team had the experience to shorten us up and tick Race 4 as “Done”. The race was won by Prodigal followed by Quickstep and Firecracker (Stephen Bridges and Kyle, Killyleagh YC). 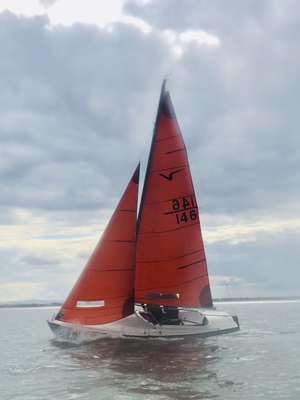 A brief pause ensued before Race 5 got underway. The increasing breeze brought with it a modified direction, so the mark layers were busy again. The wind remained fickle at times, so tidal flows made the downwind legs tricky and then it steadied again to get us home. Outlaw got the gun followed by Periquin (Noel Colclough and Vincent Delaney) followed by Quickstep.

Congratulations to Gordon Patterson and Ross Nolan taking the Championship trophy back to Royal North of Ireland YC. 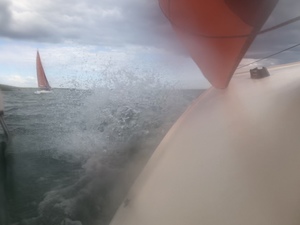 The Silver fleet was won by 3point9 Emmet Dalton and Peter Malone from HYC (Peter in his first Squib event!). Howth was represented by 9 boats, one of which was sailed by a crew from RNIYC. It is the best Howth representation at a regionals for quite a while. Results did not go our way but the positive is the re-emergence of the fleet on its 40th Anniversary in HYC. After a few years off the circuit, we will need a little time to get back up to speed!!

The event was awarded Silver Level Certification by Sailors For The Sea. Link to our award HERE

The Sailors For The Sea Award for Sustainability went to Noel Colclough for retrieving more plastic from the sea than any other competitor.

Our thanks, in no particular order, to the Marina team who ran a very efficient operation welcoming, launching, berthing and retrieving. To the hospitality team in the bar who were on hand to keep us hydrated.

I will single out mark layers this weekend for great praise. They did a great job in difficult circumstances.

Finally, to our Sponsor, Provident CRM, thank you for your great support of the Howth Squib Fleet for the second year in a row #legends

Photo Gallery will be HERE