ROMEOs travel from Howth to Hook 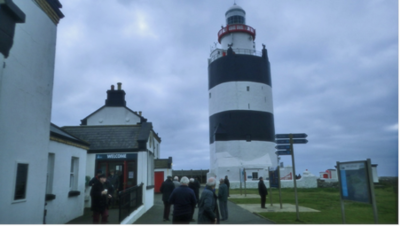 ROMEOS New Year was started on a very appropriate romantic date with a trip from Howth to Hook Lighthouse on 14th January. The date that was in it caused a number of Cromwellian comments by Hook and by Crook, possibly referring to the welcome home they would receive.

The traditional start to the Connelly station gathering was adhered to by the unfortunate neglected and starved. The door to the breakfast station bar in Connolly was kicked and rattled at 08.31. 11 hearty breakfasts disappeared before boarding the 09.35 train from Connolly to Wexford. One of the beady eyed ROMEOS took careful note of the breakfasts which had beans, thinking of the salubrious proximity seating arrangements on the 3 hour trip to Wexford.

30 ROMEOS boarded the train in Connolly and thoroughly enjoyed the coastal views all the way to Wexford. The air change ratio on the train worked superbly.

A luxury coach had been arranged to meet the train at Wexford Station. The coach driver brought the ROMEOS on the beautiful Hook Head tour. It took nearly an hour to get from Wexford to our spectacular destination: Hook Lighthouse.

A very enthusiastic and patient tour guide led the ROMEOS on a very interesting tour and presentation of the Hook Lighthouse.

The tour started in the observation room on the ground floor, and proceeded up the winding stairs to the various levels. 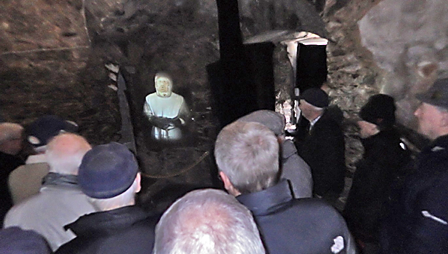 Earl of Pembroke, William Marshall thought he recognised some of the ROMEOS 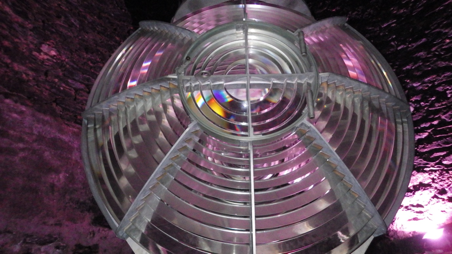 In the entrance room to the tower there was a museum lens from one of the off shore lighthouses. 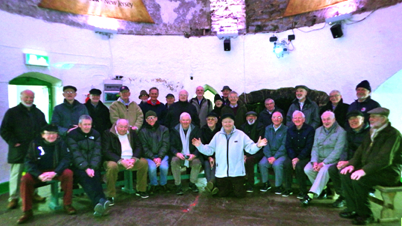 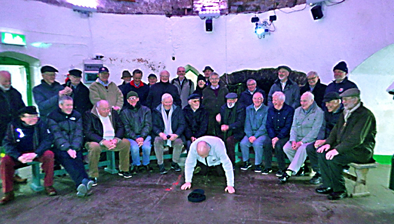 After climbing to the 3rd level there was several intersessions to give the power to proceed or know the location the nearest AED. 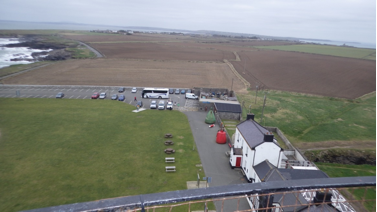 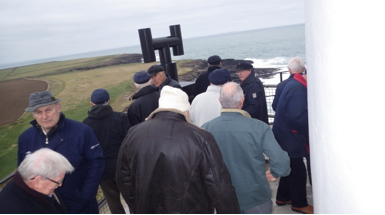 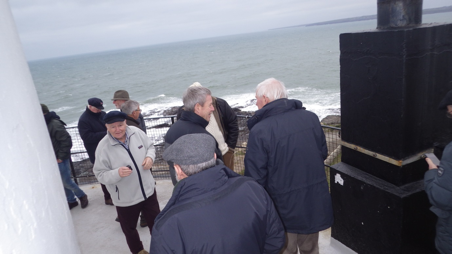 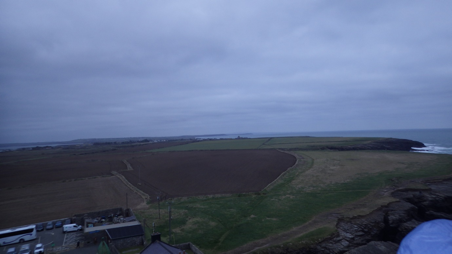 Mission accomplished, all ROMEOS made it to the top of the tower and enjoyed the spectacular views. We were very lucky to have great weather.

The existing tower dates from the 12th century, though tradition states that Dubhán, a missionary to the Wexford area, established a form of beacon as early as the 5th century. The headland is known in Irish as Rinn Dubháin, St. Dubhán's Head. However, the similar-sounding Irish word 'duán' means a fish hook, hence the English name. It is known locally as "the tower of Hook.

The tower was built by Strongbow's son-in-law William Marshall, Earl of Pembroke, who succeeded Strongbow as Lord of Leinster. Marshall had established a port in the town of New Ross, approx. 30 km up river. In order for his new port to be successful and for ships to safely reach their destination, Marshall had a 36m high tower built at the mouth of Waterford Harbour. The exact year of construction is not known, but Marshall first came to the region in 1201 and the first map that shows the lighthouse serving its function is dated 1240, so construction must have taken place between these dates.

The first custodians to the light were a small group of monks whose small monastery was situated on the peninsula. The monks who lived at this monastery would have lit warning fires and beacons all through the years to warn sailors of the dangerous rocks on the peninsula. It was the monks who lived at this monastery in the 13th century that became the first light-keepers. They are also thought to have helped in the construction of the tower

Hook Lighthouse is one of the most fascinating examples of medieval architecture in Ireland. The tower stands four stories high with walls up to 4m thick. The tower itself consists of three rib-vaulted chambers in the lower tier, while the upper, narrower section would have carried the warning beacon. These two tiers are connected with a mural (within the wall) stairway of 115 steps. The tower was constructed of local limestone and the original building survives intact. The first tier is 13m in diameter at the base and has three storeys, each with its original 13th-century stone fireplace. In the thickness of the wall there are a number of mural chambers, including two garderobes (toilets). The upper tier is 6m in diameter: originally it supported the beacon fire, which was later replaced by the lantern..

The monks left the tower and were replaced by the first lighthouse keepers in the mid 17th century. In 1671, a new, but still coal burning lantern was installed on top of the tower to replace the old beacon light. The coal fire was finally abandoned in 1791 when a whale oil lantern 12 ft. in diameter with 12 lamps was installed. This continued until new gas lights were installed in 1871, lit by gas manufactured in the enclosure known as 'the gas yard'. In the 1860s, three dwellings were built for the lighthouse keepers. Paraffin oil became the source of power in 1911, and a clockwork mechanism changed the light from fixed to flashing. This mechanism had to be wound up every 25 minutes by the keeper on duty. Finally, in 1972 electricity became the power source, and light-sensitive switches were installed to control the lantern. In March 1996, The Hook Lighthouse was converted to automatic operation, and the last light-keepers who had climbed the stairs and tended the light were permanently withdrawn from the station. The lighthouse is now remotely controlled from Dún Laoghaire by the Commissioners of Irish Lights.

Coal gas replaced oil lamps in 1871 and lasted until 1910. On New Year's Day 1911, a revolving third order 500mm focal distance optic replaced the dioptric lens, and vaporised paraffin took over from coal gas as the source of light; paraffin succumbed to electricity in 1972 when the intensity was increased to 480,000 candelas. The duration of the flash was decreased to 0.11 seconds, the character being Fl W 3 secs. The range of the light was 25 nautical miles.

Fog signals were operated at the lighthouse as a warning to seafarers during dense fog which can suddenly descend on the peninsula. The fog signal was essential in days before radar and radio. Fog guns situated at the cliff edge were fired every 10 minutes. These were replaced by explosive charges set from the top of the tower on an extending arm. Finally, a compressed air horn (hooter) blasted every 45 seconds during fog

After the tour of the Lighthouse; there was a short coach ride to the famous Templars Inn, where a pre-arranged lunch was thoroughly enjoyed by one and all. The service was fast and friendly, the scenic views across the Waterford Estuary were spectacular and the malt and grape beverages were much appreciated.

The coach trip from Templars to Wexford station passed with much joviality and banter. It was a bit of luck that we arrived at the station with time to spare. The opportunity was taken to visit a local shibeen for travel sustenance. 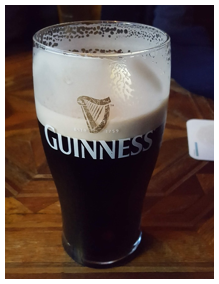 Half full or half empty?

On behalf of all the ROMEOS, thanks to our chief ROMEO Gerry O’Neill for organising another wonderful outing. A great day was enjoyed by all. Many thanks to Gerry Sargent for his usual efficient administration and financial organisation.

As there was limited availability on the coach and on the lighthouse tour, there was place for only 30. It was a pity that some of the ROMEOS were not accommodated on this trip.

Date for your Diary

Our next ROMEO trip is on Wednesday 10th April, and it is a lucky manmade coincidence that it is the opening day of the All New Aviva Rugby Museum. This will be followed by lunch in the National Yacht Club. Details for this trip will follow to all ROMEOS within the next few days by email. Put this date in your diary.