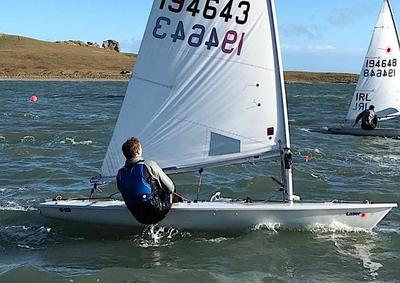 What a change a week makes! There was a certain skeptical air in the dinghy pen as sailors took off coats and searched their bags for baseball caps in very mild and sunny conditions.  The breeze was perfect, with a steady 16kts, gusting in the mid 20s. However, with the gusty breeze coming from the South West and a residual swell rolling in from the East, it was tricky to keep a consistent level of heel and good boat-speed.

There were plenty of 20-degree shifts, which meant a conservative and flexible strategy up the middle generally paid off. Start line videos shows Ronan Wallace and Dan O’Connell both timed their starts to perfection to lead off the line. Dan lead at the first mark but had a couple of incidents, letting Ronan Wallace and Daragh Kelleher through. They had space to extend their lead, especially on the fast second reach. Kelleher overtook Wallace on this reach, but was passed again downwind by Wallace to take the race. Dan O’Connell finished third, with Dave Quinn in fourth and Michael Evans in fifth. The second race saw a significant lull and shift just at the gun, which made for a confused start. The breeze quickly settled back into the steady shifting pattern though. The race played out in a smilar fashion to the first, with Ronan Wallace taking the gun, from Daragh Kelleher and Dan O’Connell. Mike Evans passed Dave Quinn at the last gybe mark to reverse their positions from the first race.