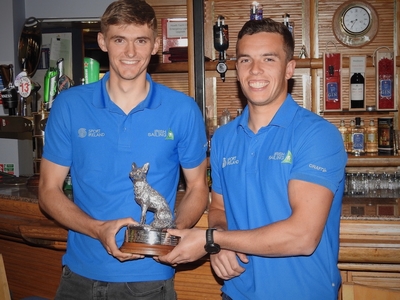 Robert Dickson and Sean Waddilove have made a short visit home from Portugal to accept their recent 'Silver Fox' award from Howth Yacht Club and to attend the Volvo Irish Sailing Awards event which is being held in the RDS on Friday 8th February. The 49er Class Olympic hopefuls are preparing for the Vilamoura Grand Prix later this month, an event that will be used as preparation for their schedule of important upcoming regattas.

The Howth and Skerries duo have used some of their time at home to polish up one of their 49ers and to put it up for sale to help fund their expensive campaign as they continue to seek qualification for the 2020 Olympics in Tokyo. Robert and Sean have been using their 'mid-age' boat for training this winter in Cadiz and Vilamoura and also have another new boat in readiness for the European and World Championships later this year. They will travel to Palma in March for the Princess Sophia Regatta, and then their attention turns to 2 very important back-to-back events - the Genoa World Cup in April and the European Championships in Weymouth this May. These events will count as 'test' events for the Olympics and an opportunity to secure a guaranteed place in Tokyo for one of the Irish teams.

Also in the running and training with Robert and Sean are NYC members and brothers Tadgh and Sean Donnelly and the experienced pairing of Ryan Seaton and Seafra Guilfoyle. Ryan has already competed in 2 Olympics, finishing 10th in the 49er with Matt McGovern in Rio 2016. The step-up to the senior squad following their victory at the World U23 Championships last September doesn't seem to have phased Robert and Sean, they have revelled in the challenge and appreciate how the rivalry benefits all of the 3 boats in the squad. Sean explains 'The benefit of a 3-boat training regime is that we are all constantly pushing ourselves well beyond any comfort-zone and remaining focussed on the challenge ahead'. And the challenge ahead is a daunting one because there is only a little time left to work and prepare for qualification. As ever, Robert asserts with a steely tone 'Our goal is to get some big results in the coming months, increasingly mindful of the European Championships in May. We will then reassess our position and hopefully be able to concentrate on the priority 2019 events such as the Tokyo Test Event in August (another World Cup Series regatta) and the World Championships in New Zealand in December'.

See below short video with their first 'Silver Fox' award from HYC and thanking club members who voted for them - this is normally recognised as the club's annual 'senior' sailing award, not bad for a pair that in recent years won the 'Seaward Bell' - the junior award!