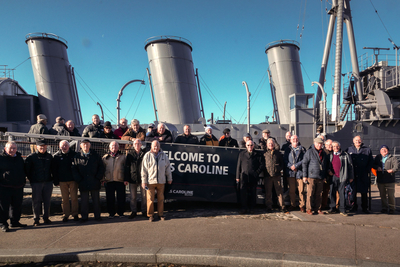 The ROMEOs winter season kicked off with a trip to Belfast to visit HMS Caroline. The day started off with a gathering in the Connolly Station. The usual hungry bunch went to the bar for full Irish breakfast…..great value…less than €10.

Thirty three Romeos boarded the Enterprise in Connolly Station and 4 boarded in Drogheda to Belfast at 09.30. The train was crowded with shoppers and children, but by great diploma and tact, true to form, the Dublin ROMEOS managed to retain seats for the Drogheda ROMEOS. A luxury coach had been arranged to meet the train at Belfast Station. It was a five minute bus ride direct to HMS Caroline, which is in a reserved dock beside the H and W shipyard.

HMS Caroline was built by Cammell Laird of Birkenhead. Building started on 28 January 1914, she was launched on 29 September 1914 and commissioned in December 1914. Caroline was built as a C-class light cruiser. She was powered by 4 Parsons Geared Turbines developing up to 40,000 shaft horse power at full speed. She had a top speed of nearly 30 knots and was driven by 4 propellers. At full load the displacement was 4733 tons, the overall length is 140 meters, beam is 12.6 meters and draft is 5 meters. The full complement was 325. 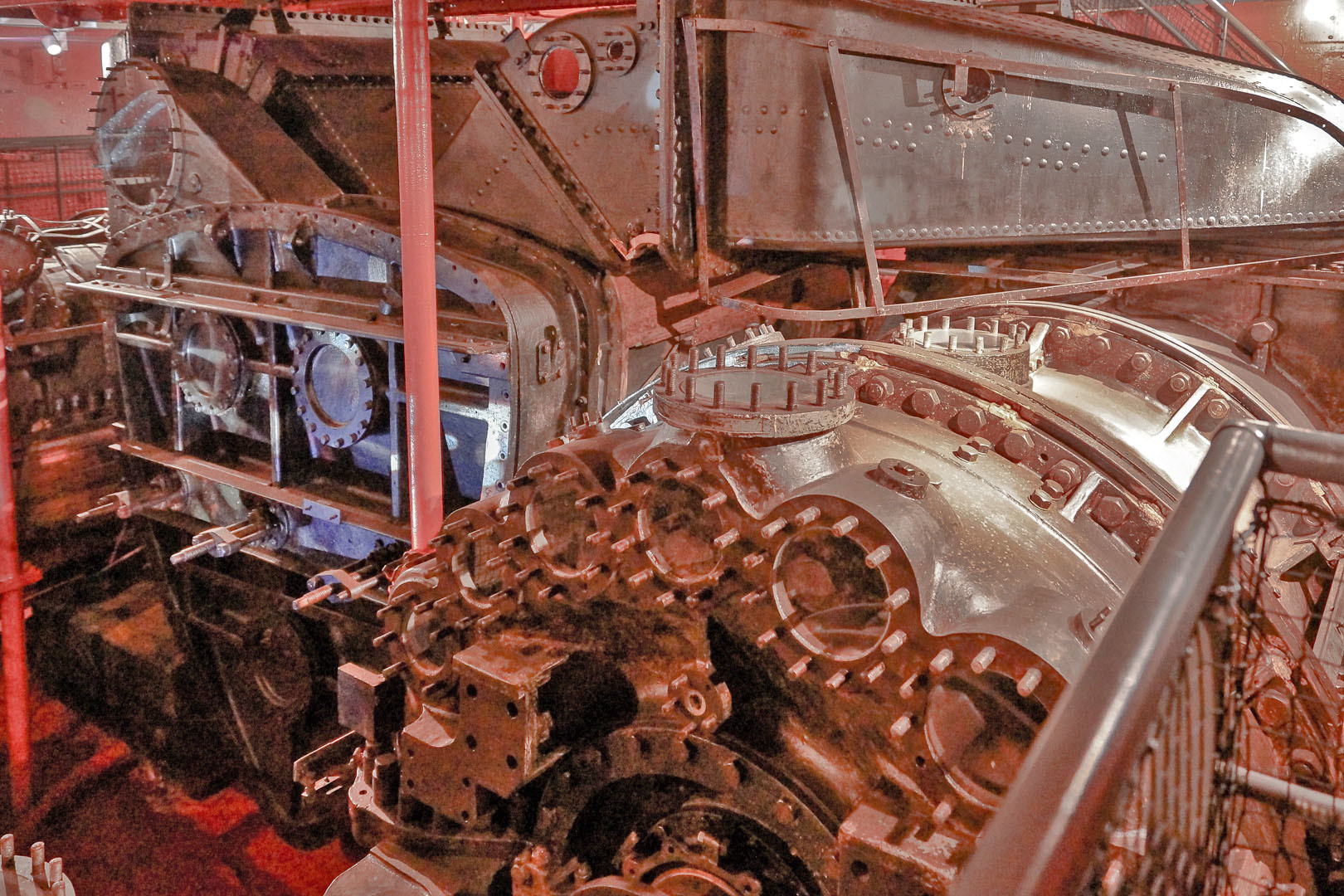 **Note there is an interesting documentary film of the Battle of Jutland in the Caroline museum.

Caroline remained in the 4th Light Cruiser Squadron after World War I and in June 1919 went with the rest of the squadron to serve on the East Indies Station. In February 1922 she paid off into dockyard control and was placed in reserve. She came out of reserve in February 1924 to become a headquarters and training ship for the Royal Naval Volunteer Reserve's Ulster Division at Belfast, Northern Ireland officially beginning those duties on 1 April 1924. Harland and Wolff of Belfast removed her weaponry and some of her boilers around 1924, after her arrival in Belfast.

From 1939 until 1945, during the Second World War, Caroline served as the Royal Navy's headquarters in Belfast Harbour

After the Second World War, the Royal Navy returned Caroline to the Royal Naval Volunteer Reserve, and she served as its last afloat training establishment. She underwent a refit at Harland and Wolff in Belfast in 1951.

Caroline is listed as part of the National Historic Fleet. On her decommissioning, she was placed into the care of the National Museum of the Royal Navy at Portsmouth, though remaining moored in her position in Alexandra Dock in Belfast. Although no longer capable of making way under her own power, Caroline remains afloat and in excellent condition. Buffeting from waves and high winds have caused the ship to almost come away from her moorings several times. In 2005, during a storm, she ripped several huge bollards out of the jetty concrete, but failed to break free entirely. 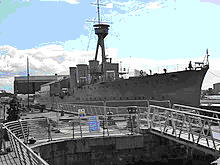 In October 2014, the Heritage Lottery Fund announced a £12 million lottery funding boost to enable the National Museum of the Royal Navy to turn Caroline into a visitor attraction in time for centenary commemorations of the 1916 Battle of Jutland. Caroline remains moored in the Alexandra Dock in the Titanic Quarter in Belfast.

In June 2016, HMS Caroline was opened to the public as a museum ship and forms part of the National Museum of the Royal Navy.

The interior of the ship is well preserved considering her age. Some of the accommodation has been preserved as it was during service. The admiral of the Romeos had to test the Captains Bath. 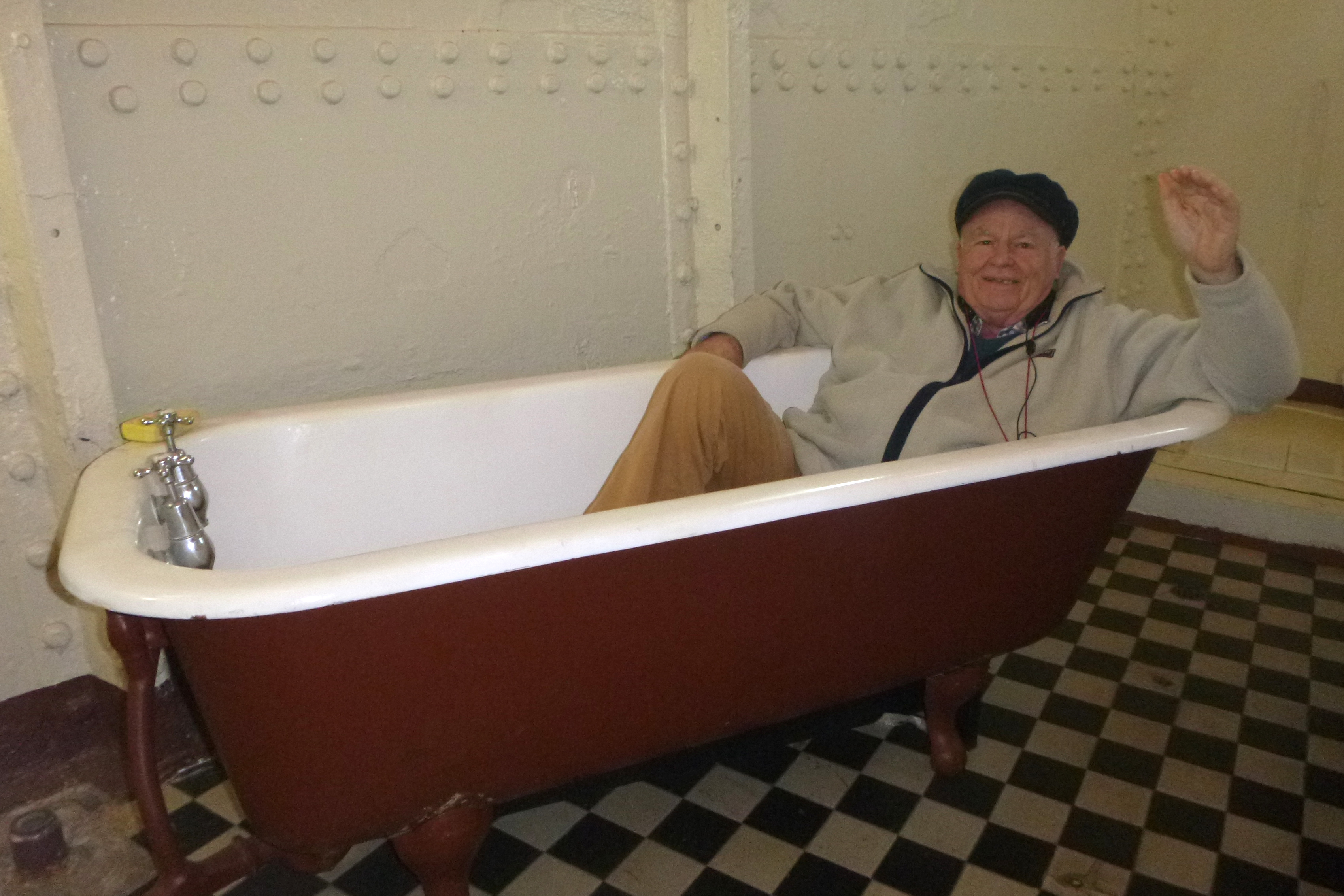 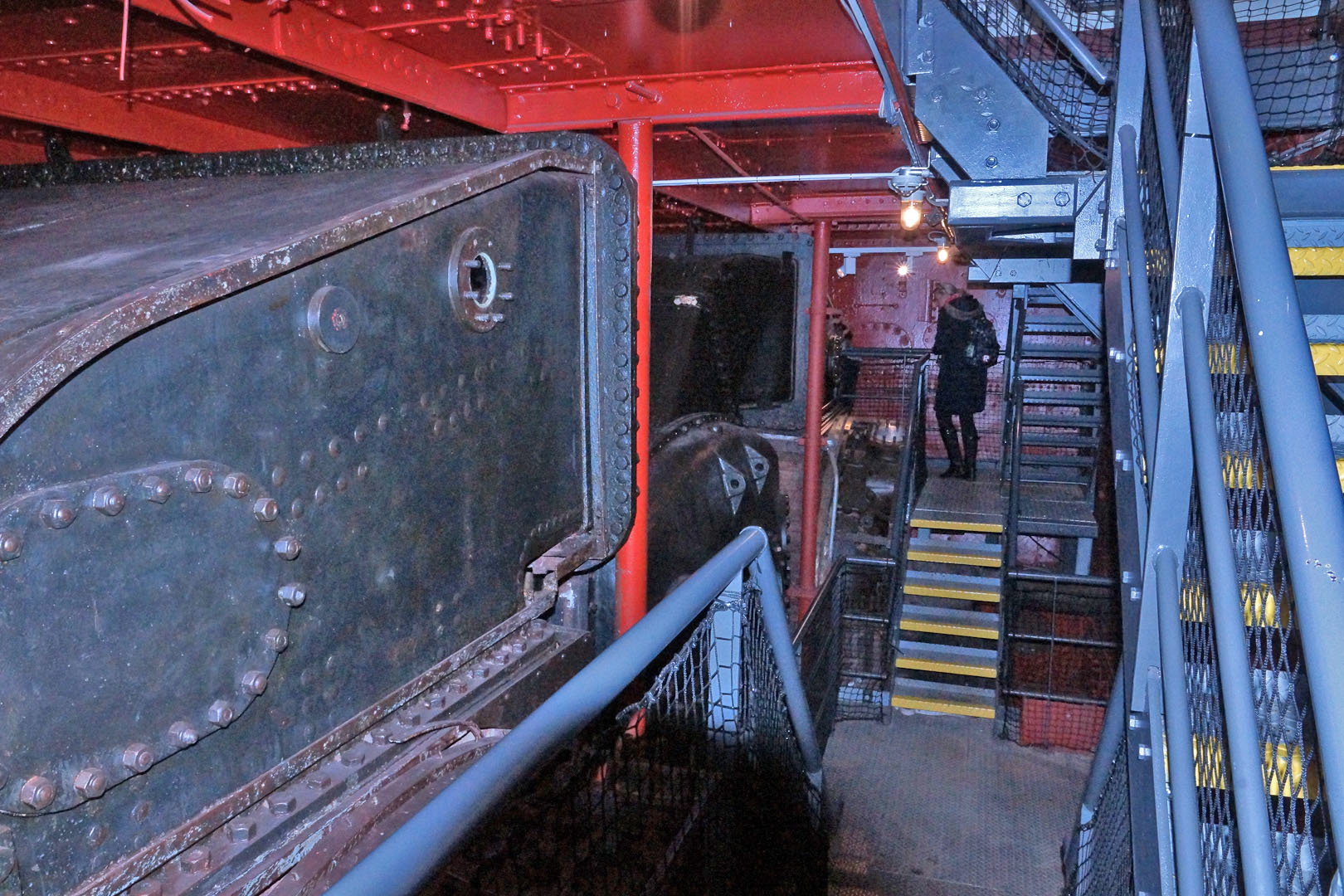 Some of the main components of the Engine Room machinery were still in place, and it could only be imagined what it must have been like when the ship was underway at full speed in such a place.

There was an interactive centre for using the aldis signal lamp of the day. Naturally this attracted the interest of some, who tried their hand at sending Morse messages. 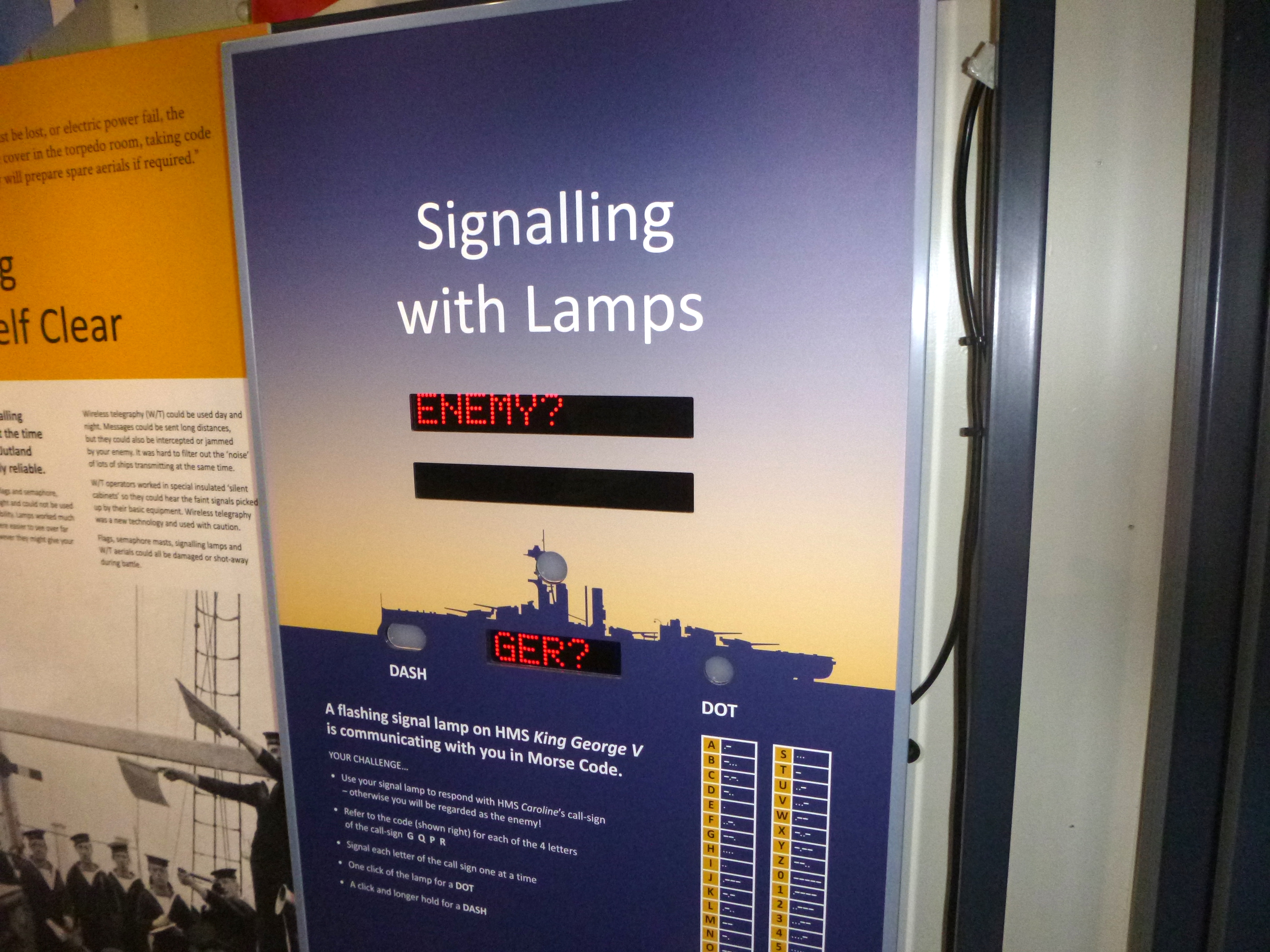 The mess rooms were laid out as if for a meal, but every piece of  cutlery and  delf was nailed down…..just as well, with some of the scallywags mooching around. 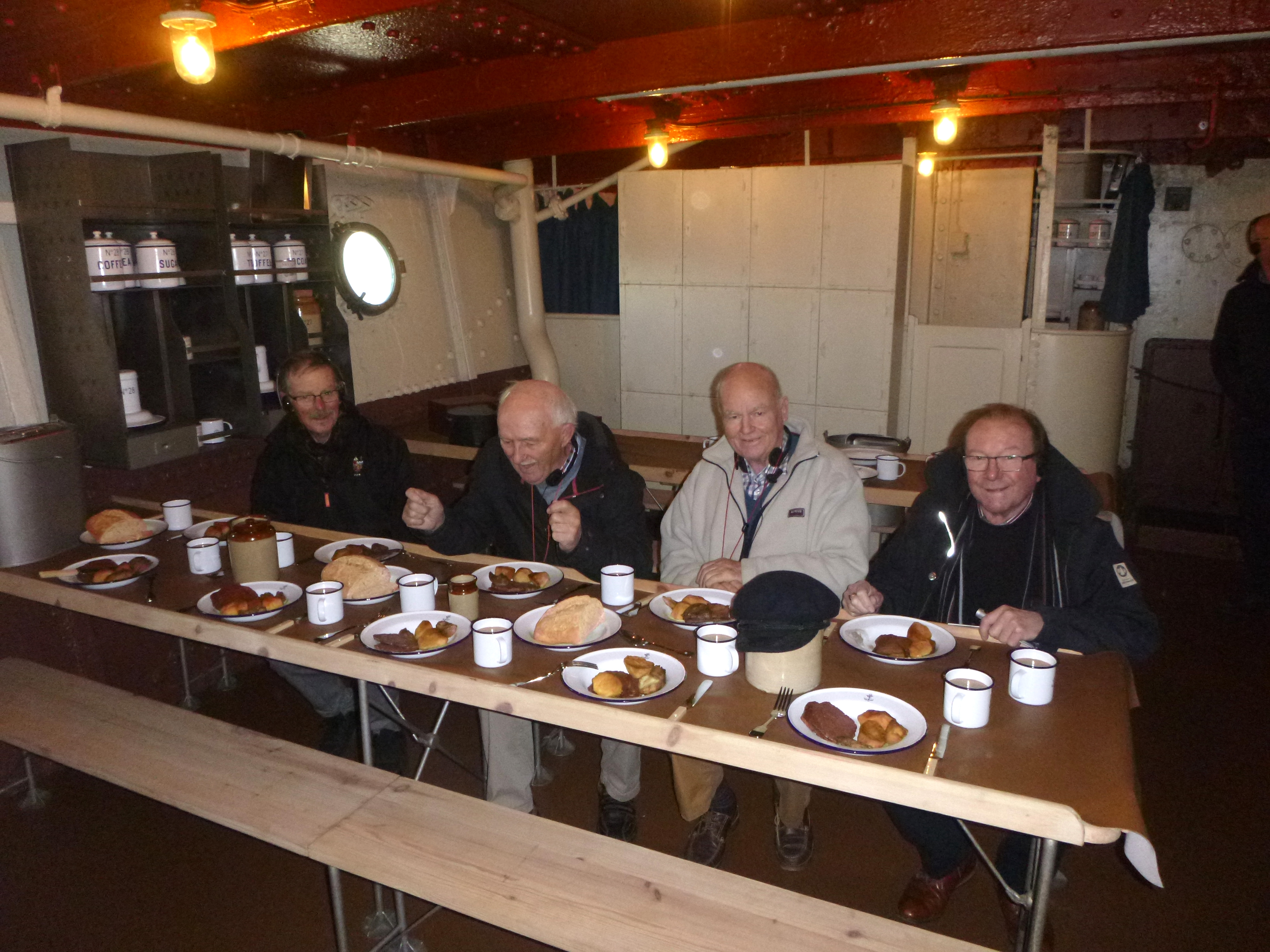 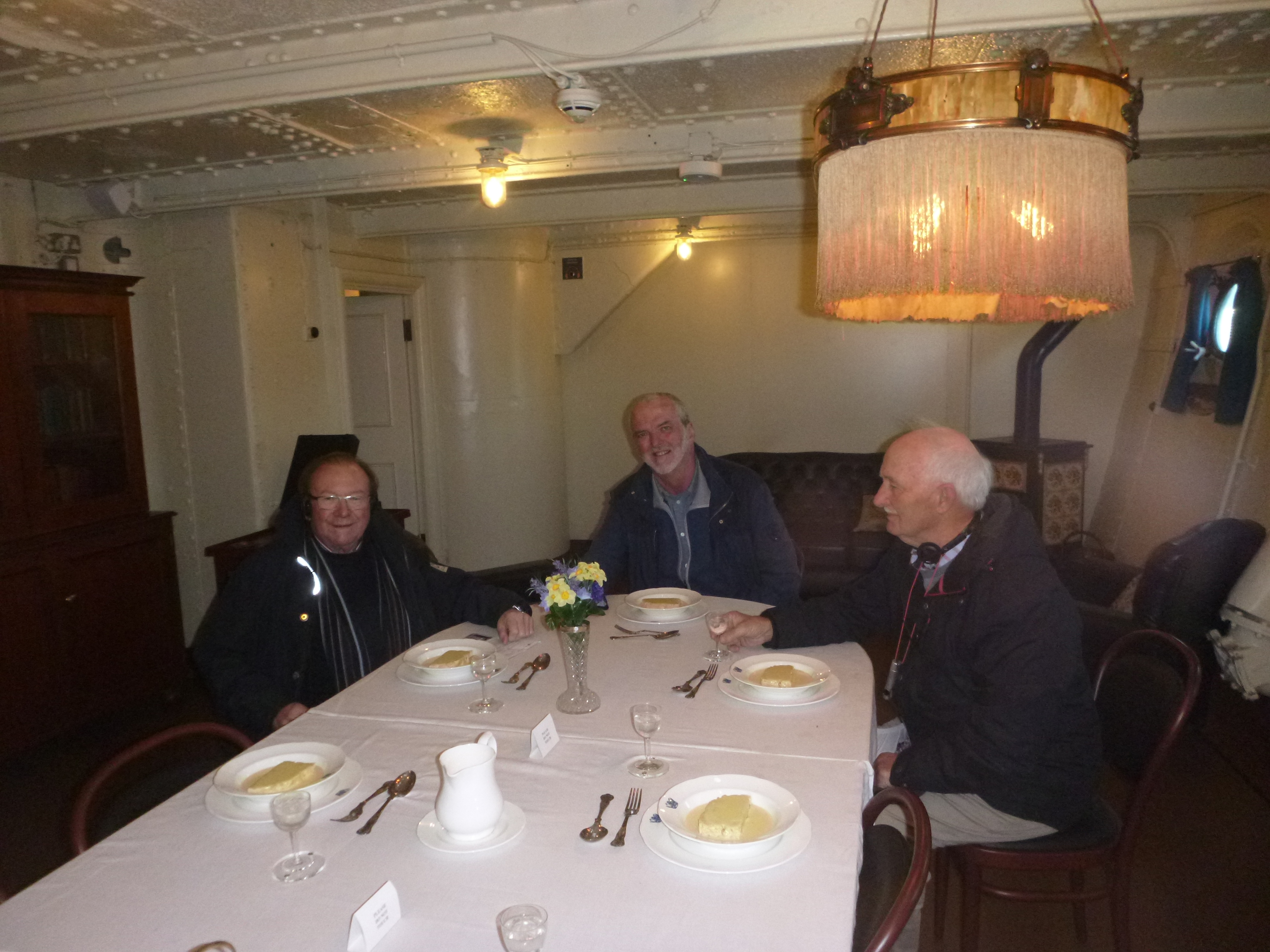 One of the other interesting interactive place was the helmsman. Instructions were given by a Royal Navy Officer by speaker to the helmsan to join a fleet on screen. The helmsman had control of the helm and speed. There was some carnage and lost ships during this exercise

Ship is a 100 years old, one of the very few ships that is not remembered by the any of the Romeos.

It was great that Paddy Judge; HYC Rear Commodore took a well-deserved day off from his busy work schedule at the club.

There is no such thing as a magic trip. There is a huge amount of work goes on in the background. The idea for the trip, the contacts with HMS Caroline, the coach arranging, the train seat booking, the lunch venue; all managed by our Chief Romeo Gerry O’Neill ably assisted by his stalwart lieutenant Gerry Sargent. Gerry Sargent had made a scouting run to Belfast, leaving nothing to chance, checking the restaurant and ship, a big thanks to Gerry Sargent.

The lunch restaurant was Weatherspoon. All thoroughly enjoyed the variety of food and the price of the drinks….a fortune was saved at €3.50 a pint. Well spotted Gerry the scout.

Next Romeo trip for your Diary is Friday 21st December. This is the Romeo Christmas Lunch at HYC preceded by a trip to the Croke Park museum. Timing and details to follow to Romeo Members.

Photos by Paddy Judge & others