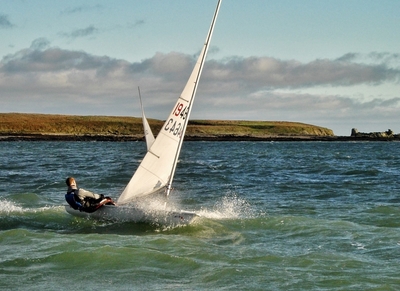 The mild Autumn / Winter shows no sign of letting up, with another nice morning for the Howth Lasers again this week. Illness, injury and possibly some early Christmas celebrations depleted the fleet this week, but the competition was still as fierce as ever. With the wind switching around to 245 degrees, we had much flatter seas than last week. Flat out boat speed was essential along with plenty of endurance! Winds ranged from 19 to 27 knots initially for first race. Ronan Wallace started at the committee boat and controlled the fleet throughout the race. Behind him there was a close battle for places 2 to 5 with a very gusty gybe mark causing problems for many. Conor Murphy was unlucky to lose out on 2nd place with a broken outhaul line just at the final leeward mark.  Dave Quinn took second and Conor Costello third. The breeze moderated to between 12 and 17 knots for the 2nd race. Dave Quinn lead off the line, but Conor Costello showed some great speed to lead round the first mark. They exchanged places for the next lap before Ronan Wallace took the lead on the second lap with his lightning fast speed on the broad reaches. This was a much tighter race with nothing to separate 2nd to 5th place again right to the finish. It finished with Wallace getting another bullet and Quinn second, with Mike Evans coming through to take 3rd.

There are 2 more weeks to go before the Christmas break, and we have Christmas drinks planned for all competitors after the final race of the Winter Series on Sunday 16th. Our annual New Years Day race will also take place this year, with a single race at the slightly later start time of 11:45. All are welcome.