World champions return to Howth to tell their story 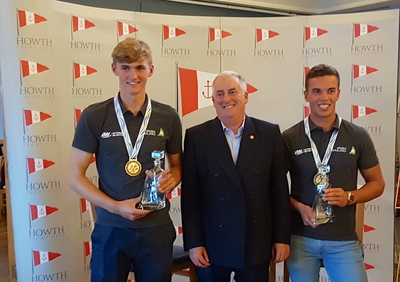 HYC members have already logged some remarkable successes during the 2018 season, but the Gold Medals won by Robert Dickson (21, HYC) and Sean Waddilove (20, Skerries SC) in the Olympic 49er U23 Worlds last weekend at Marseilles was worthy of special honours writes W M Nixon. Last (Saturday) night, HYC Commodore Joe McPeake hosted a Welcome Home celebration in the clubhouse which was attended by well-wishers and fellow-members from other successful local families in the international scene, such as Hopkins and McMahon, in addition to many members of the families of the Medallists.

The special occasion was put to good use with Commodore McPeake asking the queries in a focused Question & Answer session with the two Medallists, an intensive exchange of information which gave much pause for thought among those in the audience who sail in the relatively easy-going local classes such as the Howth 17s and the Puppeteer 22s. For instance, with a top-level 49er, the minimal ideal is to have a new jib and kite for every major regatta, and a new mainsail for every second regatta.

By international standards, the Dickson/Waddilove campaign was being run on a shoestring. But by May of this year, they’d achieved the basic ideal of having one boat permanently in Ireland for continuing intensive training when they’re at home, with a second boat for the international circuit. Now with a Gold Medal in their CV, they and their support team can hope for greater resources, while their fellow members who operate at club level have a much better understanding of the pace of competition and performance in this ultra-athletic class.