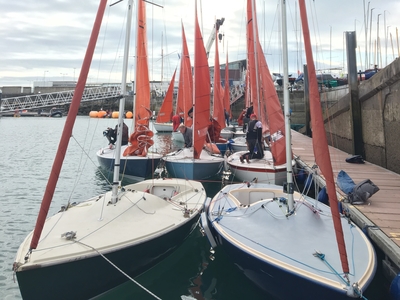 Following on from the recent HYC Squib Easterns, four intrepid Squibs made the journey from Howth to Dun Laoghaire to compete in the Irish Championships hosted by the Royal Irish Yacht Club.

The boats departed Howth on Thursday 16th August in a gentle breeze from the NW, which strengthened and backed to 25kts from the west by the time the fleet rounded the Baily. Honourable mentions go to Fergus O’Kelly, who made the journey solo; and to Squib newbie, John McNaboe, who experienced Squibs in every sailable wind strength and sea state in just one journey. The seven sailors enjoyed the après-sailing barbecue and hospitality in RIYC, before heading home to discuss tactics for the weekend ahead.

Friday began with scrutineering of all 19 boats entered, and the Howth boats were given the “all-clear”. No missing correctors on the HYC boats (Quite the opposite in one case)! PRO Brian Matthews welcomed  the sailors to the event and the fleet  headed out in shifty winds and significant chop to complete Race 1. Dave and Simon Sheahan in O’Leary were the best Howth boat, finishing 9th.

Saturday brought vastly different conditions, with wind speeds around 10kts and flat seas. Although just three races were scheduled for Saturday, the forecast for Sunday was marginal and so the race committee took the decision to run four races. The day saw Fergus O’Kelly and David Cotter, who borrowed Derek Bothwell’s boat “Tears in Heaven” for the event, find their stride with 5th and 3rd place finishes in R4 and R5 respectively.

Due to an Ironman event being held in Dun Laoghaire on Sunday, the warning signal was at a very civilised 1200. Conditions proved to be much better than originally forecast, allowing the 6th and final race to be run. The fleet headed ashore after racing for the prize giving and a light lunch. The Howth Four, escorted by Derek Bothwell in “Shoestring”, departed the RIYC mid-afternoon to catch the flood tide home. The sailors were relieved that the journey home was a run in light winds and flat seas, although it did bring some disappointment for Derek, who found that the fish just weren’t biting.

The Howth Squib fleet has been returning to strength over the last two years, seeing the arrival of some complete newcomers, as well as the return of former Squibbers in new boats. With almost a thousand boats across Ireland the UK, Squibs are a popular choice for many owners due to being such good value for money; needing only two people to sail, and being as indestructible as a cockroach in a nuclear event. The Howth fleet are a friendly and welcoming bunch, and are happy to talk to anyone who’s interested in getting some Squib experience. If you’d like to try out a Squib, come talk to one of us in the bar after racing (Tuesday night), or contact us at our Facebook page (https://www.facebook.com/HYCSquibs/)