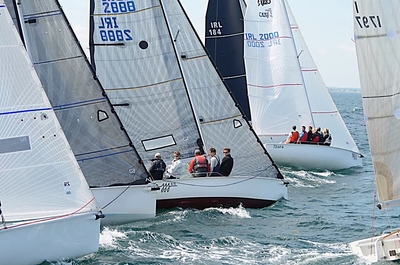 After getting through the full compliment of nine races, Aoife & Robbie English's Atara, helmed by Ross McDonald, won the 1720 Europeans. They kept their form from the Autumn where they won last year's National championship in Baltimore, to hold the two major trophies for the 1720 Class. With the event on home waters, it was up to them to set the pace of the regatta which they did by winning the first race on Friday. With the sun shinning, the fleet headed out north of Ireland's Eye in about twenty knots of wind and blistering sunshine, if the water was warmer it would have been shorts and t-shirt weather and lots of suncream.

There were expectations of blasting downwinds and spray of water that would make for great photographs and thrills and spills during the racing. But by the time midday came and it was time for racing the wind had eased a little so that the downwinds were less white knuckle blasting and the adrenaline could stop coursing through the bodies. At times it paid to go bow up and stretch the legs but the extra ground covered was not always beneficial. Some experienced skippers were showing great discipline by sticking with the lower displacement mode and making gains when it was easily tempting to bring the bow up, move the crew back and blast from corner to corner. There were huge gains to be made from changing the mode at the correct time depending on the pressure.

The competitiveness of the fleet was shinning through as there was a new race winner for nearly every race! It took until race five on Saturday for Atara to be the first boat to win a second race and there were five different race winners in the series. It was Colin Byrne at the helm of Optique who held the overnight lead after day one after posting a race win, a second and fourth. The leader board was tight with two O'Leary boats Dutch Gold (Robert) and Antix (Fionn Lyden subbing for Anthony) just one and two points adrift. With Antix dominating the final race with a sizeable victory it looked like they had hit their straps.

The conditions had been perfect, even described as too perfect as the wind barely shifted at all during the racing making it difficult to regain lost ground and placing a premium on starting, boat speed and boat handling. As the crews arrived back on the marina they were greeted by a wheelbarrow of cold beer so their minds could begin to unwind, reflect on an impressive days racing and enjoy the evening sun.

There was a lot to play for on Saturday with four races scheduled after another midday start with wind in the mid teens and forecast to drop as the day progressed. Saturday again brought lots of sunshine and glamorous conditions albeit this time with a few wind shifts to keep things interesting. Lingering in the back of crews minds was the pressure of having everything wrapped up in time to for the Pro-14 Rugby and Champions League Finals.

The defending Sportsboat Cup Champion Durcan & O'Shea's T-Bone came out of the blocks fast to win the first race of the day and finish third in race two after tussling for the win only for some confusion aboard when the race was shortened costing them a place at the finish line. It looked like a fight back into overall contention was on the cards. Unfortunately an OCS in the final race of the day for them halted their comeback after a slow start by their standards. Welsh visitors and multiple Sportsboat Cup competitors Brook & Griffith's Luvly Jubbly posted some nice podium results with a second and third in consecutive races. While Ben Cooke's Smile n Wave put in three podium finishes during the day to push up the leaderboard. So the top three overall from the start of the day were all struggling to varying degrees and Atara moved into the overnight lead with a consistent 2, 1, 4 & 5 for the day with the fifth impressively coming back from restarting after being OCS.

After lots of close quarter maneuvers, busy mark roundings and several red flags displayed throughout the day the expectation was there might be some work for the jury to get their teeth into. Maybe it was a chilled beer while derigging, maybe it was sunshine or maybe it was sport on the tv but the fleet headed for the bar and not their rule books once their boats were looked after and put to bed for the night.

The J/80 fleet was racing for the inaugural Irish National Championship title. With the fleet having grown significantly in recent years the time was right to run a dedicated championships at home. Pat O'Neill's Mojo having competed at the Worlds, UK and French Nationals last year had the most big race experience in these boats but it was Dan O'Grady's Jammy who was setting the pace in the small fleet. Jammy wasn't able to have it their own way as  Mojo  took two races from them to b lemish their attempt at a perfect score. When  Mojo  did get ahead of Jammy they were able to hol  d them off showing that boatspeed was not as issue in the closely matched one-designs. At the end it was O'Grady's Jammy that took home the ISA gold  medal, Mojo taking silver and new addition sailing their boat for the first time Watson & Cagney's Jam Jar finishing third.

In the mixed Tonner class it was Mike & Richie Evans' The Big Picture who took home the spoils. The boats in this fleet were clearly using this regatta as a warm up for their season and keeping eyes on upcoming regattas such as Wave Regatta and the Quarter Ton Cup. Some gear failure and some non appearances meant there was sometimes just a single boat going through the motions on the course.

The overall Sportsboat Cup Champion and the winner of the Romaine Cagney Bowl was awarded to the winner of the 1720 Fleet as it was the most competitive fleet that was racing. The newly crowned European Champions of English/McDonald and their Atara crew deservedly add the 2018 Sportsboat Cup to their title. In having the championship wrapped up with a race to spare the Howth and Cork crew won more races than any other boat, were the most consistent and also posted the lowest discard in the fleet. 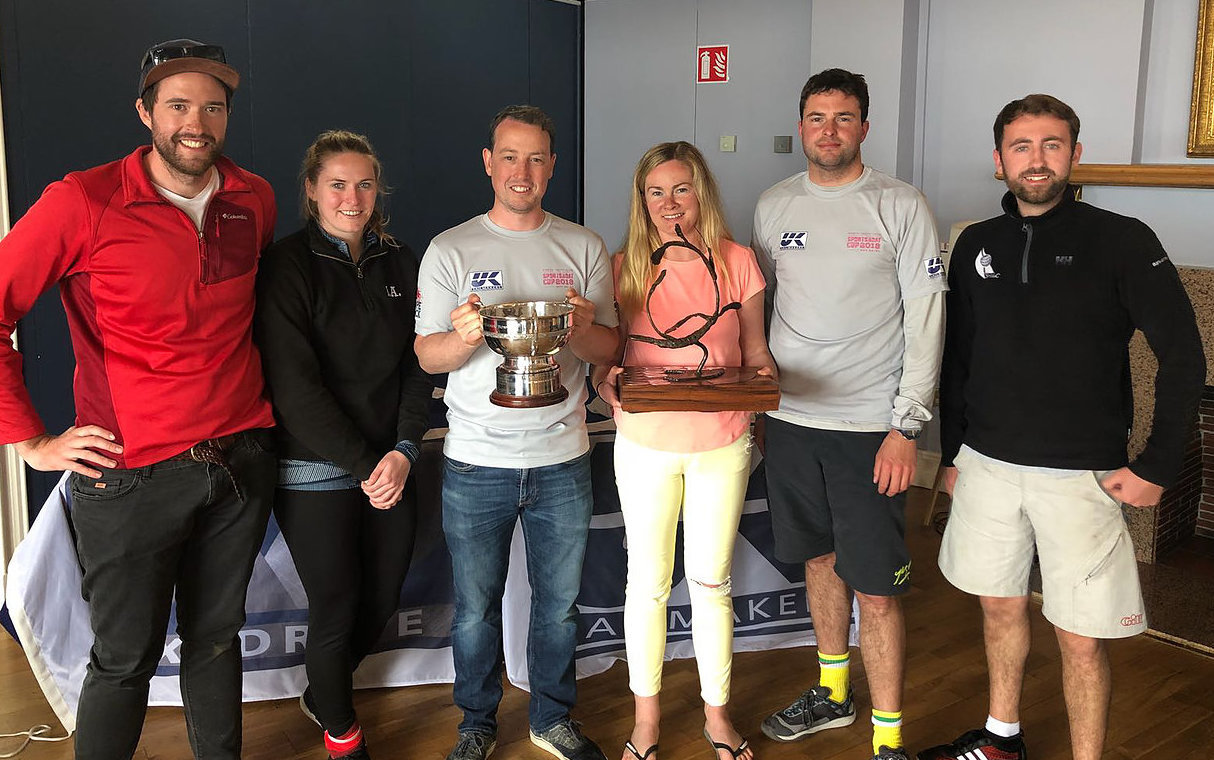 A final thanks to the event sponsors of UK Sailmakers Ireland, Rope Dock, Aethic Eco-Compatible Suncream and Alpha Ropes.