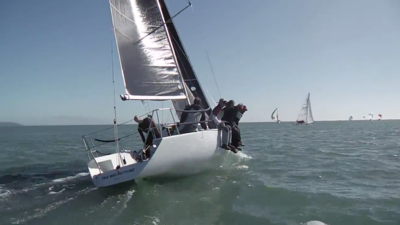 It’s all to play for in Class 1&2 coming into the last day of the Key Capital Private Spring Warmers. Stephen Quinn’s J97 Lambay Rules leads Mike and Richard Evan’s Half tonner The Big Picture (top photo) by a point with Rick de Neve’s Corby 27 Kodachi a point behind the half tonner. Rope Dock –Atara is slightly ahead in the 1720 battle , while Maximus leads amongst the x302’s.Only 3 points separate the J80’s.In the J24 class, Steve Atkinson’s Bad seems to have it sewn up. No doubt all will be studying the excellent video footage from North Sails Maurice O’Connell to improve on their boat handling and trim setting to get that little edge.The Sb20’s head off to Greystones having finished last week, with Sin Bin taking the spoils from Broomsticks and Venuesworld.