Snooker shootout between HGC and HYC/SDC 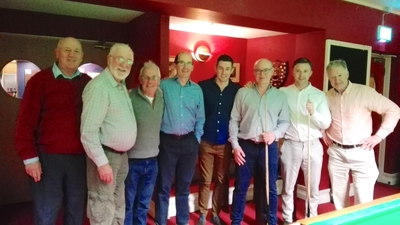 A combined Snooker team from HYC & SDC played Howth Golf Club in a friendly match on Monday evening the 9th April. The host team, which was composed of members of HYC and SDC won the match by a 3 to 2 in a closely fought match. The two teams were even on points after four matches. The final match was decided on the final shot of the match, a black ball  which decided frame.

This friendly match will hopefully mark the start for Howth Yacht Club and Sutton Dinghy Club to make a return to interclub competitions after an absence of several years. I am hoping that it will be possible to develop contacts with the other clubs on the Howth Peninsular leading to a revival of the Peninsular Trophy and our participation in it.  I hope that this will encourage more members to get involved the game and I expect to be able to arrange many more friendly matches next winter.

Needless to say we are coming into the sailing season and the snooker players will be otherwise engaged! Our regular Wednesday Snooker Competition continues and will end on the 18th April to coincide the start of the summer racing series. Looking forward to the end of the summer and the start of the Autumn League, it is planned that regular Wednesday Snooker Competition will restart in mid September. The Club has experienced a drop in numbers playing snooker over the last few years. The drop reflects level participation activities during the winter months, and the fall in membership as a result of the recession.

I hope that the as the prospect of more participation in competitions develops and as future plans evolve, that members interested in playing snooker will return to the sport.

New members are always welcome, knowledge and experience are not required.  Several people have told me that they would like to play but feel that they are not good enough! To these people I would simply say that we are very happy if absolute novices wish to try playing.  Anyone who wants to know more can contact John Faller at 0872361564.

Finally I would like to pay particular thanks to Rowan Johnston of Howth Golf Club for his help and assistance in organising this match. We all hope to arrange a return match in September.