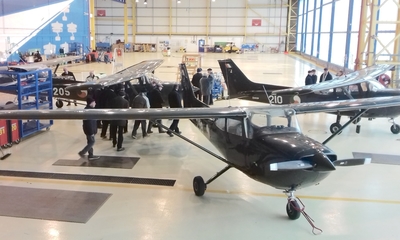 The ROMEO’s recent visit to the Air Corps Museum in Casement Aerodrome (Irish: Aeradróm Mhic Easmainn), Baldonnel necessitated more planning and organising than any previous outing. We had to take out Social Public Liability Insurance, supply the names of the organisers, the registrations of any vehicles being used, including the bus we would be hiring. Copious correspondence to and fro entailed.

Despite complying with all requirements, when we arrived at the security gate nobody in attendance there knew we were coming. Naturally this caused confusion until things got sorted out whereupon we were allocated an excellent guide who brought us, thoroughly, through the entire site.

The museum is maintained by serving Air Corps personnel and with the help of the Roger Casement one branch. The collection includes 12 full air frames from over the years.

The Aerodrome is the headquarters and the sole airfield of the Irish Air Corps, and is also used for other government purposes.It is the property of the Irish Department of Defence. It is also the home of the Garda Air Support Unit.

The airfield was first laid out in 1917 and was used by the Royal Flying Corps (soon to become the Royal Air Force). It was part of the RAF's Ireland Command.

The aerodrome was originally run by two pilots from the Royal Air Force. The airfield was the one from which the first successful east-west Atlantic crossing by a Junkers W33 aeroplane, the Bremen, took off on 12 April 1928 with Baron Hünefeld, Hermann Köhl and Captain James Fitzmaurice as co-pilot, as well as the first Aer Lingus flight took place on May 27, 1936. It was also the destination at which Douglas Corrigan landed on his famous 'wrong way' flight across the Atlantic.[4]

In February 1965 Baldonnel was renamed Casement Aerodrome in honour of the Irish nationalist Roger Casement, executed for treason by the British in 1916.

Queen Elizabeth II landed at Casement Aerodrome on 17 May 2011, beginning her state visit to Ireland.

After the excellent tour our bus brought us to An Poitin Stil in Rathcoole where we consumed excellent food and liquids before being returned to Howth.