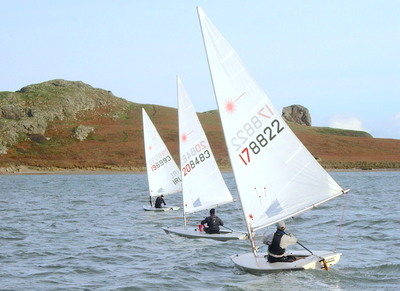 The conditions for Sunday’s Laser Frostbites contrasted those of the previous weekend, much to the appreciation of the sailors! The sun shone and the southerly breeze started the day at 12 knots and slowly increased over the two races, starting to hit 19 knots as the fleet headed ashore. 23 boats took to the water, 14 Standard rigs, 7 Radials and a pair of 4.7s. The southerly coming down over Howth Head and the cross tide made for interesting racing with significant shifts, a wind bend and the tide ebbing across the course to ensure nobody could feel comfortable in their position and there was always hope of recovery for those who fell behind.

Ronan Wallace got ahead early in the first race and held on to to take a comfortable first while lomg term rivals Ronan Cull and Paul McMahon fought it out for second, Ronan getting to the line ahead. In the second race, after a general recall and a U flag start sequence was needed to get the fleet away, Ewan McMahon bagged yet another first place after increasing his lead throughout the race and taking his victory by a comfortable margin from Ronan Wallace and Ronan Cull.

With 4 races now sailed, Ronan leads the series in the Standard Rigs. Ewan's young brother Jamie scored two first places in the Radials while Dylan McEvoy did the same in the 4.7s.