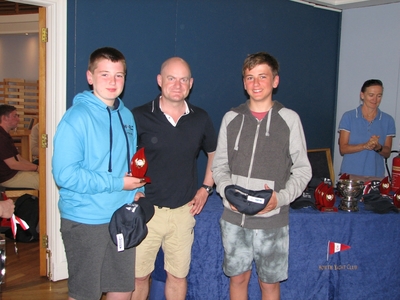 Howth Yacht Club hosted its annual dinghy regatta on Sunday.  We had a great turnout with 86 sailors participating in 70 dinghies across eight fleets. Sailors were greeted with early morning sunshine and while everyone applied the sunscreen we waited patiently for the wind to kick in.  It finally cooperated allowing us to get our quota of races in.

Richard Kissane and the team on Sea Wych did a great job to get two races completed for the seven main fleets, comprising a strong fleet of Lasers (Radial and 4.7s), Fevas and Optimists.  We raced three scratch fleets within Sundries with toppers, RS400s and a “guest appearance” from the IDRA14 fleet which received many an admiring look!

Dave Sargent and the team on "Indulgence" did a superb job of running five races in Howth Sound.  The last race was a fun race where the kids chased after balloons filled with chocolate – I understand from Dave that the chocolate bars acted as sea anchors which helped the recovery process!  The rules were definitely relaxed on this last race with kids in some cases jumping overboard and swimming to secure the valuable prizes! Congratulations to all the kids – everyone got around the course and got an overall finishing place.

Jason and Louise in the Restaurant made sure that all the kids were well fed and Frank and the team in the bar did a great job of making sure that parents and kids alike were made welcome and enjoyed the club facilities including complimentary teas and coffees.

Vice Commodore Emmet Dalton presided over the Prize giving ceremony to close out a great event.

A huge thank you goes to all the volunteers on the day for the slick handling of over eighty competitors, managing everything from registration, slipway, committee boats and protests.