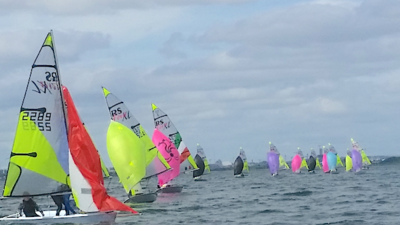 It's been a fun week for all of our Feva sailors who decamped to Dun Laoghaire for pre-event training on Tuesday evening, the RIYC regatta on Wednesday and finally the three day Nationals, hosted by the Royal St. George Yacht Club.

28 boats lined up for the Nationals and, on Friday, were treated to two 180 degree wind shifts as the sea breeze came in and promptly died two hours later. Lets just say that Saturday was windy, 20+ knots and the boats became quite a handful for a lot of sailors including Team HYC.  Jamie and Archie spent a long time swimming. Trying to reinsert their dagger board into an upturned boat is never easy especially in a Feva, where the air pocket is tiny, as Archie found out when they capsized.

Sunday was glorious out on the water. Up to 10 knots, warm, sunny and a reasonably steady westerly breeze. The event was won by Eddie and Kevin Farrell sailing out of Llandudno Sailing Club in Wales showing great skill planing downwind all weekend. Henry Start and Morgan Devine from the host club retained the National title after a close battle on Sunday with the Galligan brothers from Greystones. Liam from HYC and Ben from MYC recovered from a difficult day on Saturday and finished 3rd overall and were thrilled to receive their ISA Bronze medals.

The rest of Team HYC sailed very well and everyone had some really good results in this competitive two hander class. Christopher and Harry had two excellent races on Sunday, arriving at the weather mark first in both. Aoife and Elysia got their kite working well and showed great form as did Jamie and Archie who were in third place for much of Race 8 on Sunday. After winning the RIYC regatta earlier in the week, Ruth and Jools suffered some gear failure in the Nationals and had to count two DNFs in their results. Plenty of good results in there too though.

All in all, it was a great event, competitive, fun, sociable, full range of wind, 28 double handed, fast, exciting assymetric dinghies sailed by kids in ages ranging from 11 and up.

Maybe it’s time you got your kids involved? Contact class captain Sara Lacy for more info and there is lots of information on the RS Feva Ireland facebook page.

(Thanks Garrett Donnelly for this report)