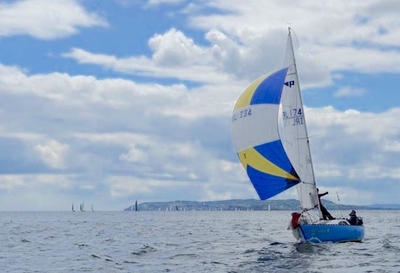 Last weekend's Lambay Races and Howth Regatta was one of the most successful in many years, proving that the formula of a full weekend of activity is an attractive proposition for sailors and their families. The partnership with Michael J Wright Hospitality Group added considerable value to the event, with a significant boost in shoreside entertainment.

The extension of HYC's annual regatta beyond the regular Saturday races around Lambay saw additional racing on Friday evening with much of the full fleet taking part in a combined round-the-cans and round Ireland's Eye race and a welcome party ashore that might have been responsible for a few sluggish decisions on Saturday's racecourse.

But for the proximity of this year's ICRA Championships (next weekend), the huge entry of  one hundred and twenty three boats from the Inshore, Offshore, Pier and ISORA fleets (including the Ruffians, Beneteau 31.7s and Beneteau 210s from Dublin Bay who raced across to Howth from Dun Laoghaire) might well have broken recent records. HYC was also delighted that the large ISORA fleet included the Lambay Race in their very busy offshore schedule, with a race that saw them use the opportunity to finish in Dublin Port with WOW taking line honours, Mojito winning IRC and Grant Kinsman’s Thalia taking the ECHO prize.

The Class 1 boats watched the new Buckley/ Knowles J109 Indian take an early lead but was overhauled on the tight reach to Lambay by Robert Dix in his 1720. Indian re took the lead after rounding the Island on a beat to the North mark. The other J109 Jalapeno was always close by and took the lead by the North mark, but Indian again took the lead and held this to the finish with Jalapeno finishing second.

The weather was a 'mixed' lot, not unusual for the Lambay Race, with a spell of gusty winds bringing crews to the foredecks to test their sail-changing skills while ashore the 80s band 'Le Freak' nimbly lept for a sheltered intermission. Giving a flavour of the race, Class 3's Paddy Kyne reported: 'Following a clear start the Class 3 fleet rounded the weather mark and made their way to Portmarnock before the crack-off and tight spinnaker reach all the way up to Lambay Island. With an ebb tide still running, some of the Class stayed close to the shoreline to avoid the worst of the tide. At the Taylor Bouy, The X302's Xebec and Viking where battling it out with the Corby 25's Rosie and Impetuous, with Alliance II and Starlet still in the game. On rounding Lambay and heading for a long beat back to the Portmarnock mark, Impetuous took the advantage and opened up a lead that she would hold until the finish in Howth Sound. A super race and great day on the water for all Class 3 competitors. Following a protest from both Impetuous and Viking to the replacing of the Portmanock mark for the second rounding, both boats were awarded redress.' That protest and the subsequent decision regarding redress held a question over the award of the overall 'Lambay Lady' trophy, which is reserved for the boat that wins its class in scratch or IRC by the largest margin. However it was finally awarded to Robert and Rose Michael (pic below) who's Mystique won Class 5 by almost 4 minutes. 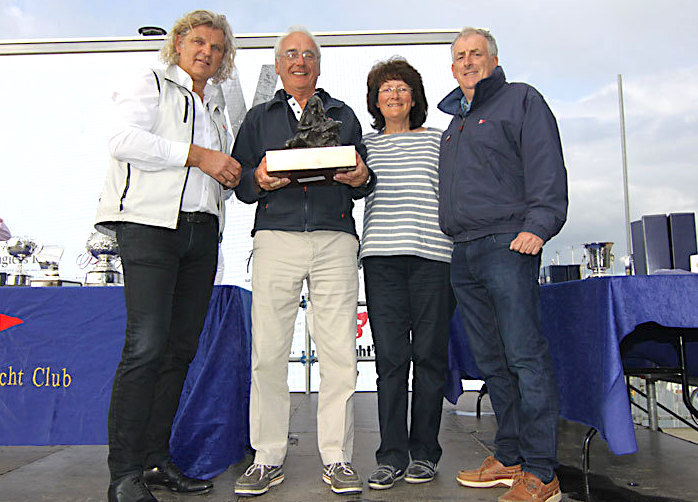 A 'senior' cohort stood by on Too Much north of Lambay, to take account of the passing yachts that raced around the various navigation marks in the lee of the southerly wind. This ageless crew included Neville Maguire, Jack Woolfe, Paddy O'Neill and Gerry Sargent. Meanwhile another convoy of vessels, the 'motorboat flotilla', was led from Howth to Greystones by Capt Tom Rickard and despite without having canvas to hoist, chose the sensible and leisurely downwind route back to Howth. Saturday ashore was a great party, with live music, themed bars and all the usual post-mortae. Many of the boats that weren't competing chose to dress overall for the event.

Commodore Joe McPeake (above photo with sponsor Michael Wright and Robert & Rose Michael) said of the event: 'Thanks to all the participants and organisers for a really great weekend. This will demonstrate to be a stepping stone to make the Lambay Races & Howth Regatta the premier sailing and fun regatta on the Irish Sea. We are now working to ensure that the Autumn League will also build on the inclusively theme which  was was seen as a success this weekend.'

Indeed the fun didn't stop on Saturday night, but continued with a very successful 'follow-on' on Sunday with a race that was enjoyed in a spread of ages that fell somewhere between 3 months old (seen on Flashback) and 92 years! After racing entertainment included a kid's disco, bouncy castle and the famous 'Dunk Tank' where the Commodore seemed to go missing, but no such luck for other eminent members Stephen Quinn, William Lacy, Frank Dillon and the chefs from the kitchen, who might have been glad to get out of the heat!

Event chairman James Markey spent much of Monday thanking the huge team of volunteers, the staff and the sponsors who contributed to another memorable weekend.

Link to results and photos here