Transition Year Adventure Sail to the Isle of Man 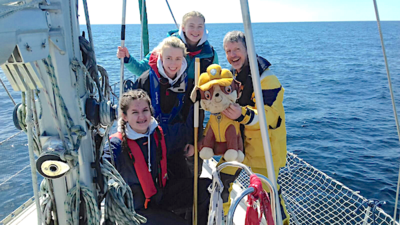 Last Thursday a group of 15 young sailors gathered in HYC for the adventure of a lifetime. At 4 am the next morning the first of 7 boats set off from HYC marina with 2 x 16 year olds on board along with 2 volunteer adults per boat.  It turned into a beautiful calm sail with 5-12 knots of breeze throughout the day and glorious sunshine.  On arrival at Peel harbour for the lifting of the bridge everyone was in high spirits after their first offshore.  The kids had a detailed sailing quiz to do along the way which kept everyone including the adults focused on the learning aspects of navigation, tides, safety and landmarks. One boat notified us they had found a dog along the way, naturally the parents waiting for news at home, all believed it to be a real live dog!

Day 2 was cloudy and rainy day at the start but as the sailors were doing a sea kayaking adventure in the morning and Coasteering in the afternoon, nobody was too worried about the rain.  Exhausted after an action packed day then followed by  a team dinner 4 of the boards set off to make the passage home over night and to get ahead of the worsening weather conditions. Brian Lennon on Blue Airs stopped off at Skerries so was the first to dock, as the weather closed in. 2 hours later Sandpiper of Howth and Bees Knees ( David & Stephen Coyle) arrived back home to HYC. Veteran sailor Andy Knowles and his son Simon seemed to enjoy the trip. David Coyle escribed the last 3 hours as exhilarating.  Gabelle 2 with Alan Grant, his wife Kate & daughter Lorraine lost their chart plotter shortly after departure so made it to Clogherhead where they off loaded their younger crew safely.

The remaining 3 boats decided to wait for the morning tide and with strong winds forecasted on the nose, all set off at 6am. Pat Murphy & Martin on Alderbaran headed straight across the Irish sea to the safe-haven of Carlingford describing the sea state as “awful”. Both Sourjourn (Charles Blandford & Paul Walsh) and Púcabán (Gary McGuire & Stephen White) headed to HYC. Both described the journey as tough but made it in 15 – 17 hours.  Overall the young sailors said it was “a life changing experience” “ I have made friends for life”.

The trip was made possible by HYC members and friends volunteering their time and boats and all the adults were pleasantly surprised. They said it was a great trip and a way for them to meet & interact with younger sailors in the club. Thank you, Volunteers.

The Transition group is very grateful to Class 0, 1 & 2 who have agreed to support the kids in the coming weeks on their boats for Wednesday night sailing, hopefully those skippers will have an equally positive experience.