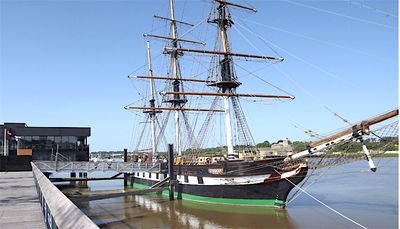 Following their very successful and enjoyable invasion of New Ross, Wexford in February the ROMEOs (Retired Old Men Eating Out) under the leadership of chief ROMEO Gerry O’Neill are taking to the air on Wednesday next 22nd March to visit the YORK Railway Museum.

The New Ross invasion began when, having mustered in Howth at 09.50 hours, they boarded a bus that departed ten minutes later. On arrival in New Ross at 12.30 they were met by John Diamond, a well-known and popular native of the historical town, and who was very helpful in organising the day’s programme.

The main purpose of the invasion was to visit the replica Famine Ship “Dunbrody” followed by a visit to the “Ros Tapistory”.

The Dunbrody is one of the premier tourist attractions in the South East of Ireland.  Centred on an authentic reproduction of an 1840’s emigrant vessel, it provides a world-class interpretation of the famine emigrant experience.

The original boat was built in 1845 in Quebec. She was commissioned by ‘William Graves & Son’, a merchant family from New Ross. She was built by the expert shipwright Thomas Hamilton Oliver, an Irish emigrant from Co. Derry. The building of the ship took only six months and was supervised by her first master Captain John Baldwin, who captained her from 1845 to March 1848.

The tour of the replica incorporated a guided tour, costumed performers and themed exhibitions of the highest quality, ‘The Dunbrody’ provides a unique insight into the bravery and fortitude with which Irish people faced up to a desperate situation.

Following the tour we had an excellent 3 course meal for a “Very Special Price” of €10 in the adjacent Hall of Fame restaurant which is one of county Wexford’s most unique and spectacular restaurant with featuring panoramic views of the dramatic River Barrow and overlooking the ship. The glass fronted, contemporary styled Hall of Fame restaurant is part of the Dunbrody Famine Ship Experience.

The day’s visit concluded with most of the ROMEOs visited the Ros Tapestry which is a unique project that has been ongoing in the South East of Ireland since 1998 and has involved over 150 stitchers working on 15 very large tapestries for a permanent exhibition in New Ross. It is an excellent example of creativity and community spirit on a grand scale and depicts our Norman history, linking many of the Norman sites in Ireland’s Ancient East. It is one of the largest series of embroidered tapestries in Europe. Each tapestry depicts a different significant event in the history of the town and surrounding areas.

A number of ROMEOs can now boast that they did some stitching on one of these famous tapestries.

The day concluded when the bus arrived back in Howth at 20.30 hours after a most enjoyable outing.

Photographs in the Gallery were taken by Pat, Conor Lindsay and John Diamond