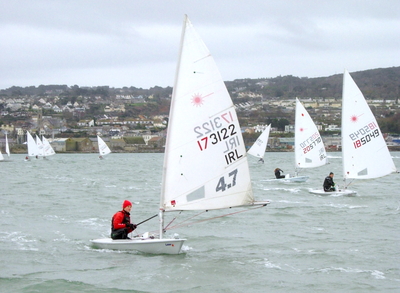 The Laser frostbites continued after a 'break' last week due to zero wind; 22 boats took to the water today (16 standard rigs, with 3 each in  Radials and 4.7's).  The fleet left the Harbour in sunshine with a gentle southerly breeze to waft them out to the starting area. The wind  direction started off from 180 but backed to 155 during the morning, particularly during first race when the mark layers had to make 3 course adjustments to follow the wind - not pleasant for the hard working crews in the very cold breeze with cold hands being made colder by the wet anchor warps.

The first race was a WL sailed in 12 knots of breeze. The tide had started to ebb under the fleet on the first start and, with a pin-end bias not helping, a general recall for the Full Rigs / Radials resulted.  The fleet got cleanly away on the second attempt and Ronan Cull led the Full Rigs home.  By the time of the second start the rain had started and the breeze had freshened to 15 knots. With the ebb now in full flow, the general recall was nearly inevitable and was duly signaled.  On the restart a black flag was used to encourage caution and all but two boats stayed back.  Dave Kirwan took the lead on the first reach of the Olympic course and battled it out with Dan O'Connell for the rest of the race as the rain stopped and the breeze eased to 10 knots. The leading group of boats moved away from the fleet as the different strategies for the upwind legs were played out, left for the tide or right for the lift.  Dave eventually led Dan over the finish line but without any Committee Boat acknowledgement.  Dan followed him across to take the winner's gun, leaving Dave's only reward as satisfaction with a race sailed well, apart from his early line transgression.  Aoife Hopkins took two firsts in the Radials, as did Eve McMahon in the 4.7s.

The full results for the two races were;